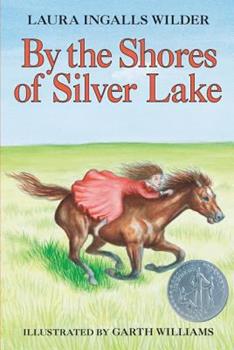 By the Shores of Silver Lake

The adventures of Laura Ingalls and her family continue as they move from their little house on the banks of Plum Creek to the wilderness of the unsettled Dakota Territory. Here Pa works on the new railroad until he finds a homestead claim that is perfect for their new little house. Laura takes her first train ride as she, her sisters, and their mother come out to live with Pa on the shores of Silver Lake. After a lonely winter in the surveyors' house,...

Published by Dianne , 1 year ago
I highly recommend these stories.

I liked the title of the book because I like silver.

Published by Thriftbooks.com User , 21 years ago
I liked the book because it was interesting the way Laura described everything to Mary because she was blind. I liked when Laura went horseback riding. It sounded fun. My Mom read these books when she was young and back then this was her least favorite when when she re-read it as an adult she found it much more interesting. Now she is reading the series to me. It was sad when Jack died. I cried because I liked Jack. Pa said he would go to dog heaven. Mom's favorite part of the book was when the family lived in the surveyor's house for the winter and they had a nice Christmas with the Boasts, and she liked the part when the family learned about the blind college, and they had hope that Mary could one day go there.

Published by Thriftbooks.com User , 21 years ago
When the book starts out, Laura's aunt comes, and Pa decides to move. Laura is 13. I really like this book because Laura puts detail in what pioneer life was like. It is a well-written book. You just can't miss a book like this.

You can feel the emotions

Published by Thriftbooks.com User , 22 years ago
Laura Ingalls Wilder described to us what we never would see--the building of railroads and towns right before her eyes. Her ability to describe makes you see the railroad being built in your own mind. This book really captures the emotions of growing up. From losing Jack, the brindle bulldog, to Mary's blindness to the hardships of no money. Laura struggles with the longing of wanting to keep going west but knows it can never happen. By being able to stay in the Surveyors House, they do not have to go back east but stay as far in the west as Laura feels she'll always be. The part where Carrie and Laura follow the moonbeam, while skating on the ice, made me appreciate the long cold winters here in the North. She appreciated all things wild and saw the beauty in the night. When they moved to the homestead, you could feel the heartache of knowing that was it for traveling in the wagon. You can feel the boredom in Laura while she is with Lena. Not that Lena was boring to Laura, but Laura saw Lena as someone who had so much freedom and would always be following the railroad while Laura would always be right where she is at. Little did Laura know that when she saw the beautiful brown Morgan horses, they and the young man driving them, would be her future.

Have they finally found Home

Published by Thriftbooks.com User , 22 years ago
In this story, Laura and her family settle in the Dakota territory where Pa must work with a railroad company. Due to the railroad, a little town begins to sprout up around them. Now the pioneering family must decide whether to move on or become part of the town. This story is one of tragedy, triumph, and human spirit. A must for every child's library.

Published by Thriftbooks.com User , 23 years ago
In this next book in the landmark "Little House" series, the Ingalls family decide to leave their farm by Plum Creek to find a new homestead on the prairie. The grasshoppers and poor crops in Minnesota were a little too much for them. In addition, some bad times appear for the Ingalls family in the time period between this and the previous book in the series. The whole family had been stricken with scarlet fever and the oldest daughter, Mary, is now blind because of it. In addition, although it is never mentioned in the books, Laura had a little baby brother at this time (Charles Frederic, "Freddy") who died before his first birthday (1875-1876). And, a new baby sister has been added to the family, Grace Pearl Ingalls (1877-1941). Laura's father gets a job acting as a storekeeper for the Chicago and North Western Railroad who are laying tracks through the Dakota terretory. While working for them, he finds a new homestead on the prairie and brings the rest of his family out. There is concern as to whether he will be able to file his claim on time; but, he does. The Ingalls family are among the first to live near the new town of De Smet, South Dakota (although South Dakota doesn't become a state until 1889). The time frame of this book is 1879-1880 and Laura Elizabeth Ingalls is 12-13 years old. The book was a 1940 Newbery Honor Book (that is, a runner-up to the Medal winner) for best contribution to American children's literature. And, it deserved it! Near the end of the book, Laura gets her first glimpse at the boy who will later become her husband, Almanzo Wilder.
Trustpilot
Copyright © 2022 Thriftbooks.com Terms of Use | Privacy Policy | Do Not Sell or Share My Personal Information | Accessibility Statement
ThriftBooks® and the ThriftBooks® logo are registered trademarks of Thrift Books Global, LLC