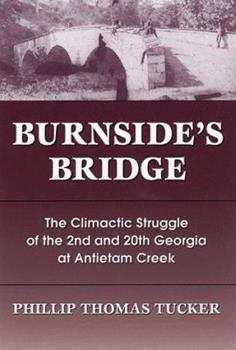 Burnside's Bridge: The Climactic Struggle of the 2nd and 20th Georgia at Antietam Creek

Before the heroic stand of the 20th Maine at Little Round Top, the 2nd and 20th Georgia Infantries, led by Brigadier General Robert Toombs, held off a veritable Yankee juggernaut and triumphed at Burnside's Bridge on Antietam Creek in 1862. This detailed account profiles the troops whose last stand helped prevent the destruction of the Army of Northern Virginia, providing Robert E Lee with yet another chance for a northern invasion.

Published by Thriftbooks.com User , 14 years ago
It is a hot Wednesday on the 17th of September 1862. You have been fighting and marching for days with the Army of Northern Virginia. It is at the end of the first campaign by General Lee across the Potomac. A bid to win a decisive victory and gain recognition and independence for the South. General George B. McClellan's Army of the Potomac is in hot pursuit of Lee's forces. Many have already escaped back across the Potomac but others are scatter all over the Maryland country side. Lee after conferring with his officers decides to make a stand and fight. Basically it will buy time for his troops in Maryland to collect and make a fighting withdrawal across the Potomac. For McClellan it is a race to destroy most of Lee's Army. You are hot and thirsty as you march though the small town of Sharpsburg. You are directed down the Lower Bridge Road. After reaching the bridge it is hurry to prepare rifle pits and defensive positions to guard the stone bridge. There are fewer then 300 Georgian troops from the 2nd, 20th and 50th Georgia infantry to defend the Lower Bridge(Soon to be forever called Burnside's bridge) from the impending attack by the Federal IX Corps. You soon hear the firing to the north. A Desperate battle by both sides starts. The rattle of muskets and the roar of artillery intensifies. The Battle is started at the Cornfield. It will soon spread to both the East and West Woods. At the apex of several roads, just south of the Cornfield a desperate fight rages around Dunker Church. South of the Church is a sunken road used by the Confederates as a make shift trench. It will soon be called the Blood Lane. Soon you know the Union Army will come for the bridge. Capture of the bridge by the IX Corps early in the battle would lead to the imminent destruction of Lee's Army. It was critical to hold the bridge for the Confederates. Colonel Holmes places you (part of the Burke County Sharpshooters) and the rest of the best riflemen in the 2nd Georgia Infantry, at the most vulnerable sector at the west end of the bridge. To stop the IX Corps you are armed with the .577 Enfield rifled musket. A deadly weapon with greater velocity and accuracy then the .69 caliber smoothbore musket carried by other soldiers around you. You know soon the IX Corps artillery will send shot and shell screaming at you as their soldiers fire and will race screaming to take the bridge.

A Handful of Georgians Hang Tough

Published by Thriftbooks.com User , 19 years ago
In the Introduction, the author states "....the full story of this tenacious struggle for possession of Burnside's Bridge has never been told until now. The accomplishments of the Georgia defenders have been overlooked by historians who have, in turn, underestimated the significance of their actions on the outcome of the action that day." For example, Russell Wiegley wrote "At the end of the day, the final Federal charge, across the Antietam near the right of the Confederate position over the Rohrbach Bridge--hereafter Burnside's Bridge--and up the adjacent hills, missed turning Lee's right and cutting his road to the Potomac only because Powell Hill and the Light Division arrived from Harpers Ferry at the last desperate moment." (1) Other historians such as Emory Thomas have written similar comments.(2)The author provides an excellent background review of the commanders and Georgia soldiers. Several officers had attended military colleges plus had experience in the Mexican and the Indian Wars. Several units, such as the 2nd Georgia, had a nycleus of soldiers from militia units such as the Columbus Guards of Muscogee County.This well researched work is not a gneral account of the Antietam Battle, but concentrates on the fighting in the Rohrbridge sector; thus the reader is not distracted by the critical events taking place on General Lee's left or center. Union General George McClellan ordered General Burnside's IX Corps to cross Antietam Creek, turn Lee's right flank and attain Lee's rear area. General Toombs' 2nd and 20th Georgians defended Rohrbach's Bridge and by noon this "....relative handful of tough Georgian Rebels" had repelled five bloody attacks and accomplished their mission in holding the army's right flank.AT 1:30 P.M., with ammunition running low, the battered Georgians had to retreat and by 3:00 P.M. the sixth Federal assault captured the bridge. Now only General Toombs' and Colonel Benning's forces could stop McClellan from sweeping to Sharpsburg and gain the rear of Lee's army. In late afternoon, the surviving Georgians, with the help of General Maxcy Gregg's newly arrived South Carolinians, counterattacked and stopped Burnside's IX Corps. Hill now arrived, joined the fighting and helped drive the IX Corps back to the Antietam Creek; however, the text notes that Colonel Benning wrote concerning the counterattack that "none of [Hill's troops] had any part in first breaking the line."On page 150, the author notes that "Despite two improbably successes on the same day, Toombs, Benning and their Georgians would not receive due recognition in the post war years." Defending the Burnside's Bridge all morning and then the late afternoon counterattack by Toombs and Benning all played a very significant role in reversing the tide of battle and ended McClellan's chance to defeat Lee.Finally on page 153, the author writes "Fewer than 300 Georgia defenders preserved Lee's vulnerable right flank and rear for most of the day, and bought time f

Published by Thriftbooks.com User , 21 years ago
this book is well researched,documented and fascinating history at its best. It doesn't get any better than this! The personal profiles of the many soldiers involved give you a much clearer picture of the closeness involved of the participants.From the generals colonels and down the chain of command to the lowest ranking private, this is a story well told thru the eyes and ears of the combatants.The holding action of the 2nd and 20th georgia regiments at rohrbach's bridge that day should go down in the annals of history's bloody battles as an equal to the dramatic stuggle of the 101st airborne at bastogne,the fighting withdrawal of the 1st Marine division at the chosen reservoir in Korea and the dramatic battle of the brave defenders at the alamo,as well as the stand at camerone,mexico of the gallant foreign legion.I highly recommend this book to all civil war and military history buffs everywhere.Mr.Tucker cannot be praised enough! Thank God someone has finally stepped forward and carried on the torch to tell the story of these brave men.THANK YOU MR.TUCKER!
Copyright © 2020 Thriftbooks.com Terms of Use | Privacy Policy | Do Not Sell My Personal Information | Accessibility Statement
ThriftBooks® and the ThriftBooks® logo are registered trademarks of Thrift Books Global, LLC