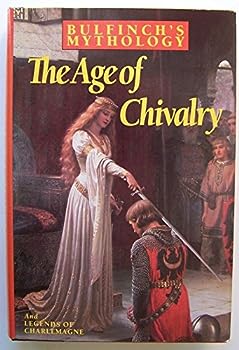 The Age of Chivalry & Legends of Charlemagne

This description may be from another edition of this product. The classic collection of myths and legendary lore. All major periods of mythology are covered, from Greek and Roman ages to King Arthur.

Published by Thriftbooks.com User , 12 years ago
I thought this was a great read. I didn't know many of these mythological stories, esp. the ones from Norse and Celtic traditions. A must read for anyone who is a true bibliophile.

Published by Thriftbooks.com User , 19 years ago
So many people are like me...they read and studied mythology in school, then rapidly forgot much of what they learned. Some knowledge of mythology, however, is necessary if one wants to undertand and appreciate great literature. So many great authors draw upon mythology in their work. One (and only one) example is Milton; so many people who say they don't understand "Paradise Lost" are simply missing allusions to the mythology contained instead.I'm not a classicist, a theologian or a philosopher. I'm not an expert in ancient Greek or Latin. What I am is a lover of great literature and it pains me when I come upon a mythological reference I don't recognize or remember.I tried using a classical dictionary, but found this created one problem while failing to solve another. The problem is that it is annoying to interrupt the flow of one's reading to look up an allusion in a dictionary. I'd almost rather skip the reading than do that. And, even after looking up an allusion, at least in a dictionary, we usually still don't understand the poetry and the full meaning of the myth."Bulfinch's Mythology" solves this problem. With this book, anyone can learn about the gods and goddesses of Greek and Roman antiquity, of Scandinavian, Celtic and Oriental fable and of the Age of Chivalry, in a readable and entertaining manner. With "Bulfinch's Mythology," we certainly won't learn as much as a scholar, but we will learn enough to enjoy and appreciate the references to mythology we encounter in literature, painting, sculpture and music.The stories in "Bulfinch's Mythology" are divided into three sections: The Age of Fable, The Age of Chivalry and The Legends of Charlemagne. The classical myths and legends have been derived from Ovid and Virgil. Although the stories are told in prose, they retain all the poetry of the original. The second section, the myths and sagas of the north, were drawn from Mallet's "Northern Antiquities."Bulfinch has gone one step further than to simply present myth in an enjoyable and readable manner. He has included many poetic citations to help us better remember the myth in question and to see exactly how myth is incorporated into literature.I love perusing this book. "Bulfinch's Mythology" has reintroduced me to the stories of Zeus and Hera, Venus and Adonis, Daphne and Apollo, Pygmalion and Galatea and many, many more.If you want to learn more about myth, but don't want to make a comprehensive study of mythology, "Bulfinch's Mythology" may be the perfect book for you just as it is for me.

Published by Thriftbooks.com User , 20 years ago
Bulfinch does a great job of retelling the classic Greek/Roman myths of antiquity as well as the myths of Old Europe including, among others, Arthur, Charlemange, Orlando, and Thor. One part that stands out is the Mabinogeon which (and this is noted on page 561 of the Modern Library edition) has a Thousand and One Nights fell to it. One part that appeared to not fit into the book at all was Chapter 37 of The Age of Fable, which hastily describes a portion of Eastern Mythology. Although this section has no true faults with the information, one gets the sense that Bulfinch quickly threw the myths together and since he didn't have room for them anywhere else he put them in this chapter. Although it does not take away from the quality of the book it might have been better had Bulfinch chosen either to elaborate slightly on the myths or to not include them altogether. However, for an introduction to classical mythology for the reader who is having trouble understanding Byron or Milton or Shakespeare or a hundred other classical European and American writers this book is a godsend. Bulfinch tailored this book to just this kind of reader. At times it may seem a bit dry, but Bulfinch intended his work to be used as a reference mainly (which is why he included a great index in the back of The Age of Fable). For those readers who are interested in mythology as an end unto itself, I recommend this work as your main road map through this sometimes confusing trail. Robert Graves and Edith Hamilton's works are good also but in my opinion Bulfinch outdoes both of them. From here you will definitely want to look at the Madrus and Mathers 4 vol. edition of the Thousand Nights and One Night (that is the full title) if you liked the Eastern feel that you get in Chapter 37 in the Age of Fable and the Mabinogeon. If you are interested in the Greek and Roman myths mainly go straight to the horses mouth and read Ovid, Homer, and Virgil. For more European mythology, Malory's Le Morte D'Arthur is indespensable. I recommend Penguin's two volume edition but with some hesitation, as the annotation is a bit strange, making you flip back and forth between the front of the book and the back of the book. However, Penguin prints out almost every major mythological story, ranging from the Medieval French Romances to the Icelandic Sagas. As stated before, let Bulfinch lead you through this mass of myths, he knows what he's doing.

Published by Thriftbooks.com User , 21 years ago
This book is an excellent mythology reader. The first section is devoted to the stories of gods and heroes. The majority of the stories is from Greco-Roman mythology and includes such classics as Apollo and Daphne, Pygmalion, The Golden Fleece, Midas, The Sibyl, and much more. This part also devotes four chapters to Eastern Mythology (Hindu myths, Zoroastor, etc.), Norse mythology (Thor, etc.) and The Druids of Iona. Part two is made up of the popular Arthurian legends and contains many of the most famous stories such as Tristam and Isoude, the quest for the Holy Grail, and the Death of Arthur. Much of this section is rendered in verse. This part also has the Mambinogeon and other myths of the British race (e.g. Beowulf and Robin Hood). The final section (my personal favorite) includes the legends of Charlemagne, or more specifically those of his paladins. This is where one can find stories of Orlando, Rinaldo, and Ogier the Dane. These stories are not as famous as the Arthurian legends, but are just as exciting. There is a very helpful dictionary of names and terms and a few maps and illustrations. Also, the English is fairly easy to read and shouldn't be difficult for the average person. This book is not complete; many of the stories are obviously abridged. It would be nice if it included annotations or a bibliography for those wanting to read more in depth. However, the introduction includes a very basic history of the stories, which should help the more enterprising reader find the unabridged editions. Still, Bulfinch's Mythology is one of the best and least expensive ways become acquainted with these classic stories. I highly recommend it!

A must have for anyone who apires to understand mythology

Published by Thriftbooks.com User , 22 years ago
This is one of the most incredible books that anyone could ever own. Whether it be for a child, middle schooler, or adult, it has the ability to enhance imagination and inspire creative genius. It is a true shame that these stories aren't as well appreciated as they were in times such as the Elizabethan and Victorian ages. These stories have inspired poets, playwrights, novelists, and the non-literati as well. There is no possibility of considering oneself as a true intellectual without first understanding these legendary tales. Don't sell yourself short of owning this book. A must buy!!!
Copyright © 2020 Thriftbooks.com Terms of Use | Privacy Policy | Do Not Sell My Personal Information | Accessibility Statement
ThriftBooks® and the ThriftBooks® logo are registered trademarks of Thrift Books Global, LLC