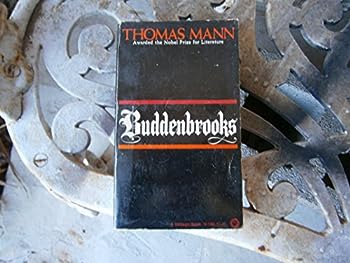 Buddenbrooks: The Decline of a Family

A Major Literary Event: a brilliant new translation of Thomas Mann's first great novel, one of the two for which he was awarded the Nobel Prize in literature in 1929. Buddenbrooks, first published in... This description may be from another edition of this product.

The Music of Time and Character

Published by Thriftbooks.com User , 17 years ago
This is a beautiful narrative, which will stay with you forever, if not in detail then in the musical arc of its composition. The book is about a family, the Buddenbrooks, who are wealthy but not aristocrats, who have as their solid moral foundation the maintenance of the family business. The degree to which each member of the family supports and conforms to this moral code, and the degree to which their personal motives and the turns of fate conflict with them, determines the level of tension at any given point in the narrative. The narrative moves through the first third of the book in a series of sometimes startlingly short chapters, introducing the characters and the musical threads that will repeat and vary throughout the rest of the novel. It's actually quite refreshing to read, not heavy at all. But the psychological depth is also not there, except in the reader's probable discomfort with the moral code being expressed. In the second third, after the death of the pious and morally-firm Jean, the first son Thomas assumes control of the family, and the narrative begins to reflect the deep dissatisfaction with the family values that Thomas suppresses for the rest of his life. Thomas's sister, Tony, and his brother, Christian, provide the extremes of adaptation to un-felt values. Tony begins her theme in a Romeo and Juliet story where Juliet accepts her fate and marries Paris, finding in this surrender the beauty of piety, as exemplified by her father. With great exuberance she literally writes her theme in the family history (a journal/scrapbook). Anyone who does not conform to the moral code of the family is evil (sometimes real, sometimes not), and she finds redemption and purity in expressing her hatred of this evil. At the end, she expresses her doubt in the tenets of Christianity, but never loses faith in the value of the family code. Christian is the quintessential failure, giving in to personal tastes and psychological self-absorption. He revels in his weakness, constantly referring to his aches and pains, and by being so weak does not succeed in creating an acceptable alternative morality. Thomas sees in his brother that which he hates and suppresses in himself. Thomas is the balance, and the champion of the moral code. As long as he lives the family business goes on, despite the attacks of global economy and the slippage of occasional moral failures. Only near the end of his life does he question the very values he embodies, in a metaphysical exploration very foreign to the rest of his life. The final third of the novel is dominated by the music, symbolic and actual, of Thomas's son, Johann. "Little Hanno" is a musical prodigy, a tortured artist if there ever was one. The life and world that he is born into causes him nothing but pain and fear, with his only refuge being his music, and the friendship of a wild aristocratic wolf-boy with literary talent. The final chapters are deep, existential, and brilliantly

A Surprisingly Resonant Portrayal of a Lost Era

Published by Thriftbooks.com User , 18 years ago
In his 1762 treatise "The Social Contract," Rousseau wrote: "Man is born free, and everywhere he is in chains." Mann's magnum opus, pregnant with bleak symbolism and teeming with lives lived in quiet desperation, highlights this stark fact."Buddenbrooks" is the story of a merchant family and their wholesale grain-trading business. It covers the rise of the Buddenbrook firm from the days of the German confederation, to its eventual dissolution during the early years of the Deutsches Reich. As the novel progresses, it becomes increasingly clear that the Buddenbrook firm is an unyielding prison from which escape is nearly impossible. Despite their wealth and status in the community, the Buddenbrooks were not truly free to pursue their own happiness. In the name of business prestige and family honor, Antonie Buddenbrook, daughter of patriarch Jean Buddenbrook, forgoes the love of her life to marry a cunning businessman who marries her for her dowry, which he uses to prop up his failing business. Thomas, the heir to the Buddenbrook empire, witnessing his sister's sacrifice, breaks off his youthful affair with a common girl and decides to focus his energies on learning the ropes of the world of business. Christian, Thomas's brother, was early on marked to be a scholar due to his wit; however, the untimely death of Jean Buddenbrook compels him to take up a position in the firm. In due course, events and personal circumstances unmask Christian's dissipation and mental incapacity for the practical pursuits of commerce. Gotthold, the 'prodigal son' and stepbrother of Jean Buddenbrook, decides to marry beneath his station, and is disowned in a particularly acrimonious manner. Hanno, Thomas's son and heir, longs to be freed from his reprehensible duties to the firm and the family, and takes comfort in his ability to express himself through the piano. Thus, there is little hyperbole in saying that none of the major characters achieve self-actualization. Furthermore, the conservative nature of their business, encapsulated in the ancestral admonition not to do anything that will hinder one's sleep at night, meant that the entrepreneurial spirit of the early days of the firm would slowly be extinguished, to be replaced by an unwillingness to broaden the firm's horizons. One can only imagine Thomas's anguish when one of his grain trades went against the firm. Indeed, his ill-timed demise, paralleling his father's manner of death, was preceded by painful self-examination while burdened by the realization that the firm and his mercantile abilities were on the wane.The novel, surprisingly, is timeless. The themes resonate clearly even today. Or perhaps, it should not be surprising to learn that fortunes wax and wane, and that wealth and stature are not preconditions for happiness. "Buddenbrooks" should be a must-read for all business students--and students of life.

Without a doubt, worthy of a Nobel Prize

Published by Thriftbooks.com User , 20 years ago
Buddenbrooks is the most autobiographical of Mann's works--and the one that most of all, earned Mann the Nobel Prize for Literature.Mann grew up in a prosperous Luebeck family, son of a merchant father who died in 1891. The dissolution of the family firm, the artistic, Southern Creole background of Mann's mother and the struggle between the materialistic merchant side and the wild, artistic side are the backdrop for a deep regret, maybe even self-recrimination, for the family's ultimate decline. The family line ends, in Buddenbrooks with Hanno, son of successful and foppish Senator Thomas Buddenbrooks. When Thomas dies, the family firm is broken up and the family starts the deep decline already in process. Hanno's red-haired, violin-playing mother couldn't care less. ("I live for Art" would seem to have been written with her in mind.) Hanno's aunt Toni is left to mourn the family's end--though Toni's own earnest efforts to hold up family honor also ended in disaster. Some declines, apparently, are natural and cannot be prevented.Interestingly, Mann puts a bit of himself in Toni as well as Hanno; he worked for a fire insurance company as did Toni's luckless son-in-law, he moved to Munich as Toni did in Buddenbrooks. The other characters, Thomas's ne'er-do-well brother Christian, and especially the grandparents are beautifully drawn and developed. This is one of the best family chronicles written, and even if you don't love "great literature" you will enjoy this book. It's been filmed as well as a mini-series, but frankly, nothing comes up to reading this for yourself. I couldn't put this novel down once I started it. And it is a hefty book, though not the longest by Mann. You can still go see the house on Broad Street (Breitstrasse) (though not go in, it's privately owned) in Luebeck and walk the quaint alleyways where Mann grew up--and even the Waldhotel Riesebusch where the Buddenbrooks family enjoyed an outing is still in operation, with the same sloping lawns, in nearby Schwartau.

Published by Thriftbooks.com User , 22 years ago
Buddenbrooks tells the story of three generations of a proud family in the mid to late 19th century. Sadly, the family heritage begins to sink into a quagmire of bad business decisions, bad marital decisions, apathy and just plain bad luck. What really sets this opus (and other Mann novels) apart from "standard fare" works of literature is the depth and richness of personalities which are found in its characters. There are no "stock characters" to be found in Mann. By the end of the novel, I felt as though I personally knew the Buddenbrooks and as such was compelled to feel sad about their fate. I can think of no higher compliment that I could possibly grant a novel. The story tells of a family which thought it would continue to prosper forever. The stark reality soon sets in that the family will have to struggle in order to retain any sort of Buddenbrook dignity at all. It seems that entropy increases with each successive generation, and seemingly nothing can reverse the trend...So, read this book. Join the Buddenbrooks thru decades of weddings, funerals, musical performances, travels to the beach and deep existential philosophical inquiries. A wonderful glimpse of changing social structures and traditions in mid to late 19th century Germany. life.

Published by Thriftbooks.com User , 22 years ago
What a joy it was to read this book. It is the story of a very average family in Lubeck somewhere in the last century. The description of the members of this familiy with all their flaws, carefully depicted in all detail like in the great realistic paintings, is wonderful and it is difficult to believe that the writer was only 25.In particular his description of the "kleinbuergerlichkeit"( I have not seen this German word translated correctly in any language, but it means something like the small citizen in a small town)is phenomenal.In the reviews I see quite some comments on the translation. I am both fluent in German and English and I have read this translation with the original on the side. Indeed, the absolute purist may complain that some of the German nuances and wordgames Mann likes to use get lost. However, you have to have such a good understanding of the German, that you would not need a translation. In my view the translator absolutely got the spirit of the novel right and was able to re-create this typical small town atmosphere in Northern Germany very, very well. And fact is, Mann in German is very difficult, even for Germans. This translation has made the work of an unique author available to a wider public
Trustpilot
Copyright © 2022 Thriftbooks.com Terms of Use | Privacy Policy | Do Not Sell or Share My Personal Information | Accessibility Statement
ThriftBooks® and the ThriftBooks® logo are registered trademarks of Thrift Books Global, LLC