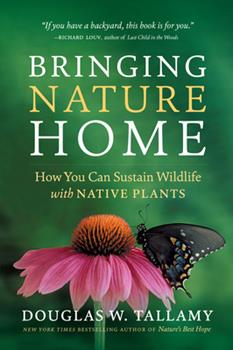 Bringing Nature Home: How You Can Sustain Wildlife with Native Plants

"A fascinating study of the trees, shrubs, and vines that feed the insects, birds, and other animals in the suburban garden." -- The New York Times As development and habitat destruction accelerate, there are increasing pressures on wildlife populations. In Bringing Nature Home , Douglas W. Tallamy reveals the unbreakable link between native plant species and native wildlife--native insects cannot, or will not, eat alien plants. When native plants...

Required reading for our future

Published by GardeNerd , 3 months ago
This book created an epiphany when published. Dr Tallamy uses scientific research results in a relatable and humorous manner to wake us up to the human illogical actions destroying our environment while giving us concrete actions for repair. Every US citizen should be required to read this.

GARDENING FOR THE 21ST CENTURY

Published by Thriftbooks.com User , 14 years ago
This is a first-rate popular work by a mature researcher. Tallamy's arguments for using native plants in suburban gardens are convincing, often eloquent (esp. in chaps. 3 and 4). He argues that native bugs can only eat plants that they share an evolutionary history with. Our bugs just can't eat plants which have evolved in other parts of the world (i.e. alien plants). Furthermore, our birds don't feed their young on plants but can only feed their young on bugs. (This is true even if adult birds can survive on plant food alone--e.g. berries from native and alien plants alike). So bugs are necessary for bird reproduction. Therefore, as the number and diversity of native plants diminish so do the number and diversity of bugs, and, therefore, so do the number of birds since bugs are less and less available for bird reproduction. So far as reproductive nutrition is concerned, alien plants are as useful as a parking lot. Since so far as making bugs available for food, alien plants have no ecological function. What's worse, there is very little in our native ecosystem to inhibit the spread of many of these alien plants--except us! Tallamy does not leave us hanging with just a lot of bad news. To the contrary, he offers a plan for beginning recovery in which the suburban gardener plays the central role. He celebrates the role each suburban gardener can have in restoring the habitat of native plant and animal ecosystems right in each gardener's own yard. He gave me a real excitement about creating and observing a wonderous, healthy biodiversity just outside my backdoor, a diversity much more interesting than I could ever achieve with alien plants. His hope is that this excitement could become widespread among gardeners such that suburbia and nature could reconcile. The few times Tallamy touches upon the issue of how best to achieve this reconciliation so far as policy, he is careful not to call for any government involvement but rather to encourage grassroots action. Now I guess in general we don't want the state telling us what and what not to plant. But if his arguments are sound, some state funded education might be in order. The state has already seen fit to spend money encouraging us to plant trees, this book seems to make a fine argument that the state has an interest in encouraging us to plant certain kinds of trees an not others. Also Tallamy seems more tenative than I would be over policy regarding future importation of aliens. But in general I think this is a great book. Indeed I've just finished it and I may be still too much in its thrall. But I put it in the rare league of two with Ricke Darke'sThe American Woodland Garden: Capturing the Spirit of the Deciduous Forest. It is a masterful work expressing, like Darke's, what might be called the new Emersonian spirit in American gardening. It really helps us become oriented toward how to cooperate with and be a part of nature in the 21st century. I suppose it goes without saying that I regard

Published by Thriftbooks.com User , 14 years ago
This book makes a convincing case, and a call to action, for preserving biological diversity in the U.S. by shifting our home gardening practices to include native plants. The author provides useful and easy-to-understand explanations and statistics to back up his thesis, and gives specific examples of plants that can be established to optimize biological diversity in large and small home landscapes. I can't recommend this book enough as a "toolbox" for individuals to use for bringing their own backyards back to life. Be prepared to dog-ear a lot of pages!

Bringing Nature Home - A MUST READ for Bird Lovers

Published by Thriftbooks.com User , 14 years ago
Bringing Nature Home is a veritable cookbook for making your yard more attractive and useful to native birds by growing the plants and food they need. If you love birds, read this book and learn how you can help restore our declining bird populations. The information is also extremely useful guidance for public land managers, landscapers, and ecologists trying to create or restore natural landscapes and native communities. In addition to an overview of the worrisome state of native wildlife in the U.S. due to habitat loss, invasive species, excessive night lighting, and an ever-expanding human population, the author provides specific natural history information available nowhere else. The book is a fun and fascinating read thanks to Doug Tallamy's vast knowledge and good sense of humor.

This book makes me stop and think

Published by Thriftbooks.com User , 14 years ago
I heard Douglas Tallamy speak at the Native Plants in the Landscape Conference at Millersville University (PA) last June, and I've been waiting for his book to be published by Timber Press. I'm a gardener, and I don't want to grow only native plants. But this book makes me stop and think. Douglas Tallamy makes the best case for use of native plants I've read. I recommend it without reservation. Simply put, the book's message is this. All life on earth, except for some recently discovered, relatively rare forms that take energy from volcanic vents in the ocean floor, depend on energy from the sun that plants convert into food through photosynthesis. Most of that solar energy is made available to higher life forms through insects that eat plants. With the exception of a few direct herbivores such as cows, all other higher forms of life either eat insects (most birds) or eat other animals that eat insects (hawks eating sparrows), and so on up the food chain. The productivity of an environment, literally the weight of biomass produced in a given area, is directly related to the insect population, and the variety of wildlife - number of species of birds and so on - is also directly related to the numbers and varieties of insects living there. Research now clearly shows that native insect populations cannot be sustained by most alien plants. Our insects have co-evolved with native plants over millions of years, and most have highly specific preferences for certain plants as food. As Professor and Chair of the Department of Entomology and Wildlife Ecology at the University of Delaware, Tallamy has access to research that tells a disturbing story. With increasing urbanization and suburbanization, loss of large forest and natural areas to development, and transformation of a vast portion of the continent into ecologically sterile lawn, we can look forward to mass extinctions of insects, birds, and other forms of life that could surpass the mass extinctions caused by the great meteorite impacts long ago. Without the literally innumerable varieties of insects that constitute the first step in transfer of solar energy into life, massive losses of species will occur in the not too distant future. Many such extinctions are actually under way. Tallamy's statistics support his message. Native oaks, for example, support 517 lepidoptera species, willows, 456, birches, 413. In contrast, alien Clematis vitalba supports 40 species of herbivores in its homeland, but only 1 in North America. Another example, Phragmites australis supports 170 species in its homeland, but only 5 species on this continent. Unfortunately, insects can't evolve to adapt to alien species in time to save our threatened populations. Evolution takes place over millions of years. Although the Norway maple has been on the North American continent for going on 300 years, and has become the predominant shade tree here, it still has not become a productive part of our native ecosystem. Instead,

Love Birds? Invite Them Into Your Yard.

Published by Thriftbooks.com User , 14 years ago
Douglas Tallamy was captivated early by the natural world. In his engaging new book, Bringing Nature Home, Tallamy writes of spending his summer days exploring the "wild" places near his home in New Jersey. There, he also discovered the devastating effects of development when a bulldozer buried tiny toads he had watched develop from tadpoles in a polliwog pond. Our hearts go out to the nine-year-old child as he works valiantly, but futilely, to save the little creatures from being buried alive. When he grew up, the boy who had tried to rescue toads studied the natural world, ultimately becoming Professor and Chair of Entomology and Wildlife Ecology at the University of Delaware. In the process, he discovered the extent of loss resulting from wide scale development and agricultural activities. And that is the subject of his book. But Bringing Nature Home is not another gloom and doom tome on what we humans have wrought. Instead, this engaging and highly readable book tells us how we can all be involved in turning back environmental loss in a way that will bring that wild world right into our own back yards by simply trading non-native ornamental plantings for native ones. Bringing Nature Home is very well documented (with a bibliography longer than your arm) and full of beautiful and fascinating photos. It includes many of Tallamy's own personal landscaping experiences as well as numerous suggestions on plant choices for the rest of us. Like Ted Williams in Wild Moments and Scott Weidensaul in Return to Wild America, Tallamy remains optimistic about the future of America's wildlife. But unlike Williams and Weidensaul, both of whom wrote eloquently about why we should connect with and want to save our natural world, the good professor's book is a prescription on how we can all work to make that happen.
Trustpilot
Copyright © 2022 Thriftbooks.com Terms of Use | Privacy Policy | Do Not Sell My Personal Information | Accessibility Statement
ThriftBooks® and the ThriftBooks® logo are registered trademarks of Thrift Books Global, LLC