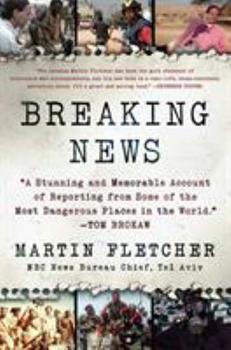 Breaking News: A Stunning and Memorable Account of Reporting from Some of the Most Dangerous Places in the World

During three decades covering wars, revolutions, and natural disasters, Martin Fletcher worked his way from news agency cameraman to Tel Aviv bureau chief for NBC News, facing down his own fears while facing up to mass killers, warlords, and murderers. These extraordinary, real-life adventure stories, told with humor and elegance, describe Fletcher's growth from clueless adventurer to grizzled veteran of the world's trouble spots. Can you eat the...

A journey worth taking

Published by Thriftbooks.com User , 13 years ago
It would be tempting to label this book for those whose interests lie in journalism or history or world affairs. The truth is one doesn't have to have a background--or a future--in any of those things. This book is about our shared humanity. While Martin helped me understand how, when, and why conflicts erupted in certain parts of the world, and while I appreciated the dangers he faced in all corners of the globe, along with his incredible bravery or stupidity (sometimes both), I was touched most deeply by the stories of people simply trying to live their quiet lives. Racial, ethnic, and tribal differences don't exist inside the heart of a parent trying to save his child. The blood spilled is the same color whether it's shed by innocents caught in crossfire or determined young men who blow themselves up in the name of their beliefs. Martin's own journey from callous young reporter bent on scooping the competition, to a father who now struggles with the pain and suffering that come with the job, was the real story for me. He has spent a lifetime opening our eyes so we can't pretend not to know, only to have to close his own when his heart can carry no more.

Great stories of History-Making news from an excellent reporter

Published by Thriftbooks.com User , 13 years ago
I couldn't put this book down, and read it in one day. Martin Fletcher takes you where most reporters won't go, or can't go. You'll read of the intense competition between the networks, and what ranks as "go" or "no-go" story; which amounts to the number of people dying or killed as being newsworthy. Stories of fellow journalists who are killed and wounded (including his own first-person account), in attempts to bring the stories of war and its victims to our television screens. How Fletcher identifies with the suffering of the victims of war in Somalia and the "Ethnic-Cleansing" of the conflicts in Rwanda and Kosovo; with his own family's suffering in The Holocaust. From the Arab-Israeli Wars to the present Palestinian struggle, to personal interviews with a warlord, suicide bombers and refugees (one very touching story of a young girl). There'll be stories that will make you laugh, cry, and some that will anger you. But they are all presented within a very personal and moving context that almost makes you feel as if you're right there, experiencing Fletcher's witness of history in the making. And that indeed, this is a very dangerous and evil world in which live.

Published by Thriftbooks.com User , 14 years ago
An amazing, POWERFUL, insight into the world of Martin Fletcher. I read the book in two sittings, four days ago, and I am still thinking about it. He tells his story in a 'mostly' chronological order, leaving me breathless at the end. It's an incredible journey and I am so thankful he took the time to tell it!

Published by Thriftbooks.com User , 14 years ago
Hanging my boots up last year after my final trip to Afghanistan was one of the hardest decisions I've ever had to make in my life. It was done at the insistence of my daughter and my knees. I finally had to realize that I could be a liability to those around me in a war zone. With that in mind, I was quite intrigued when friends contacted me and asked if I would read and review Martin Fletcher's book, "Breaking News". Martin was starting his career with the Yom Kipper (October) War of 1973 just as I was ending my Navy Combat Camera days with the very same war. Martin's account of this war is "spot on"! I wish he had written about this many years ago when I got asked to leave a Political Science class in college for telling the professor he didn't know what he was talking about. When the professor asked me how I knew, I replied with the only answer I could give, "because I was there"! Where were you when I needed you, Martin! "Breaking News" is a MUST READ for anyone interested in international conflicts and what it is like to cover these conflicts as a cameraman and as a broadcast journalist. In his 35 year career, Martin Fletcher has pretty much seen it all, and this book is his very personal account of what life is like in the day to day world of the Foreign Correspondent. Part of what makes this book great is that it does not focus on world leaders, and "their" stories. It focuses on the day to day struggles of the average person caught in the middle of these conflicts. It gives an excellent account of the journalistic integrity of one man working in the trenches of so many conflicts, Martin Fletcher. I am always reluctant to give too much detail in a book review because I hate to give out "spoilers". Once again, I will just say, "READ THIS BOOK"! Martin takes us on a journey of adventure and personal growth from the October War of 1973 to the Coup in Cyprus just a year later, to the Rhodesian War that gave us what today is known as Zimbabwe. He gives an excellent account of life in Paris for news reporters and takes us to Algiers and Iran for an insider's look at the Hostage Crisis in Tehran. From there he takes us to Afghanistan and covering the Afghan/Soviet War. He gives us a very telling account of life in Israel during the first Gulf War with SCUD missiles falling in Tel Aviv. I could go on and on about his coverage of the Middle East, Somalia, Rwanda, Kosovo, Bosnia and numerous other places of conflict and genocide. But, once again I will simply point out that Martin's book is really about his own personal and professional growth. There is some humor here, but there is a huge amount of sorrow and pain. One does not do this kind of work for 35 years without it taking a toll on your soul. Martin closes his book with the following: And I can only hope that Shakespeare wasn't referring to storytellers like me when he wrote "Life is but a walking shadow...it is a tale told by an idiot, full of sound and fury, signifying no

Published by Thriftbooks.com User , 14 years ago
This is a very different, deeply-impressing account by a very special reporter - and if this book hadn't been thrust under my nose with the recommendation to read it, I would have assumed it was the usual set of star-turn anecdotes from someone who thought they were the star-turn. Not a bit of it. Unlike some, Fletcher is never, ever bigger than the news on which he reports. If this was only the most brilliant account of exceptional, award-winning TV war-reporting journalism, which, incidentally, it is - then that in itself that would be something. But it's much more than that; it's about the moral and ethical dilemmas that people like Fletcher face daily on our behalf in reporting serious news - and, refreshingly, nothing to do with the soulless ephemerals of providing 'entertaining' so-called, 'news' features between adverts. Fletcher is one of the last vestiges of conscience and soul in the digital age when it comes to serious news reporting. Breaking News is likely - and rightly - to be considered core-curriculum stuff for anyone considering serious journalism as a career - but it's also likely a must-read for anyone who wants to share Fletcher's personal 'take' - and the chance to share in his very human enlightenment - through his reporting of a truly extraordinary series of world events over 30 years.
Trustpilot
Copyright © 2022 Thriftbooks.com Terms of Use | Privacy Policy | Do Not Sell My Personal Information | Accessibility Statement
ThriftBooks® and the ThriftBooks® logo are registered trademarks of Thrift Books Global, LLC