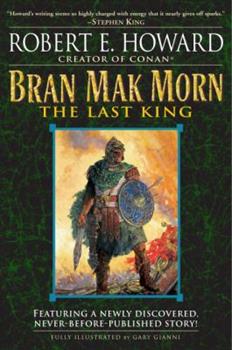 From Robert E. Howard's fertile imagination sprang some of fiction's greatest heroes, including Conan the Cimmerian, King Kull, and Solomon Kane. But of all Howard's characters, none embodied his creator's brooding temperament more than Bran Mak Morn, the last king of a doomed race. In ages past, the Picts ruled all of Europe. But the descendants of those proud conquerors have sunk into barbarism . . . all save one, Bran Mak Morn, whose bloodline...

Published by Thriftbooks.com User , 15 years ago
Of all of Howard's many memorable characters (Kull, Conan, etc.) I would say that Bran Mak Morn is the most interesting. As leader of the dwindling and nearly extinct race of Picts (a real culture that Howard has embellished upon), he battles Roman incursions and struggles to raise his beloved race out of the pit of savagery and darkness into which they are swiftly falling. He has a knowledge that no matter what he does, the fall of his race is inevitable. The true strength of Bran's character is that he battles and struggles toward his goal anyway, even though he knows that he will eventually fail. 'Men of the Shadows' is the first story in this collection and presents a strong start. It is a great introduction to Bran's character and the goals toward which he is striving. 'Kings of the Night' is the second story, and features a looming battle between the Roman Legions and the confederated armies of the northern races. This story also features an appearance from one of Howard's other popular characters. This comes very close to being my favorite in the collection. 'Worms of the Earth' is a strong tale featuring Bran's quest for vengeance against a Roman General's unjust treatment of a Pict. This is my favorite tale in the collection, and shows Howard at his best. Strong imagery, beautiful prose, and a dark plot. 'The Dark Man' takes place many centuries after Bran's death, but is nevertheless a powerful tale of the Pictish people who worship the dead king as a God. 'The Lost Race' is one of the weaker tale but presents a history of the Pictish people that makes it worthy of this collection. The Miscellanea and Appendices present helpful information but the only complete stories that feature Bran Mak Morn are those mentioned above. There are also many of Howard's poems about the Pictish people and Bran Mak Morn that show a different side of Robert E. Howard's skills and add much to the character of Bran and his people. The entire book is covered with Gary Gianni's beautifully atmospheric drawings and I would reccomend this collection for anyone seeking to discover Bran Mak Morn's character and Howard's expansive talents.

Put Some BRAN In Your Diet!

Published by Thriftbooks.com User , 15 years ago
Good old Robert E. Howard! In the last dozen years of his sadly truncated life, he created a whole universe of pulpy goodness. If you've read all the Conans, and all the Kulls, and the Solomon Kanes, you still have these jewels of fast-paced blood-drenched bosom-heaving skull-cleaving story-telling to look forward to. These are among my favorites in Howard-world: he's hip-deep in the kind of lost-race mythology that he loves, and the stories here of Bran Mak Morn and Black Turlough O'Brien really sing. Nobody did it better. When REH uses a cliche, he makes it HIS cliche, and you instantly forgive him for it. He took such JOY in creating these fantasies of wish-fulfillment that you're swept heedlessly along. Thank Crom I discovered these stories when I was 11-- when I read them now, I'm that age again, and the wonder and innocence of that time is revisited.

ENJOYED EVERY WORD OF THIS ONE

Published by Thriftbooks.com User , 15 years ago
If you are a Robert E. Howard fan, which I am, then your going to certainly like this one. Fast moving, as all of Howard's stories are, this is NOT just a Conan wrapped in a different skin. I do have to agree with a couple of other reviewers in that this is perhaps not Howard's best work, but it is certainly typical Howard and certainly worth the read. As has been pointed out, this is not a bunch of unpublished tales, cleaned up by other authors, this is the real stuff, warts and all. If you enjoy this particular genre, then you will no doubt enjoy this one. I collect these particular books and am glad to have a copy of this one, old and ragged as it might be.

More than a variation of the Conan character

Published by Thriftbooks.com User , 16 years ago
One thing I notitced is that a lot of the works were finished by other writers. Not true of this collection! Not only could they not capture the true spirit of Howard's writing but they should have been left as so...unfinished. This volume leaves the stories as they should be. I was glad to see the type written unfinished story at the end of the book. I have to wonder why Bran Mac Morn never shared the popularity of Conan. Perhaps it was the poetry that turned off some readers. It was an unexpected departure from the Conan character we all know. We can only speculate as to what Howard might have created had he lived past age 30. Not only does Howard transend the art of pulp fiction, he should be up there with Tolkien as one of the great fantasy creators of all time.

More tales from a master teller.

Published by Thriftbooks.com User , 16 years ago
If you've never read anything by Robert E Howard, you should know that he wrote for "pulp" magazines of the 20's and 30's like Weird Tales and with characters like Conan the Cimmerian and Bran Mak Morn, invented what we term "swords and sorcery" today. This collection focuses on the people he termed Picts and their king, Bran Mak Morn who is the last of his race with an unbroken bloodline. The Picts were the first of the Stone Age tribes to build a society, strive for art and explore the world, but time has displaced them, wars with the Celts drove them from conquered lands and as a result of intermingling bloodlines has thrust them into primative shadows of former glory. The setting for most of these stories takes place in the historical period of the Roman conquest of Briton and focuses on Bran Mak Morn's hatred of the Roman invaders and his drive to restore his race to civilization. Most of the stories are short, but the longest,"Worms of the Earth" is considered one of Howards best, and the all fit firmly in the mythos of Conan, Solomon Kane, King Kull and others. Also included is the Lovecraftian "Children Of Darkness", poems that tell the history and prophcies of the Picts, fragments and first drafts. This is an excellent collection that is at times moving, chilling and all ways entertaining. If you've never read REH and want to start, here is a good place to begin. If you like historical warfare with a supernatural flair or threories of pre-cataclysmic Ice Age societies you can do no better than this.
Copyright © 2020 Thriftbooks.com Terms of Use | Privacy Policy | Do Not Sell My Personal Information | Accessibility Statement
ThriftBooks® and the ThriftBooks® logo are registered trademarks of Thrift Books Global, LLC