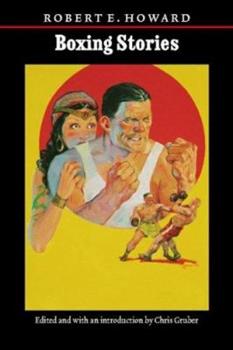 Although he is best known as the creator of Conan the Barbarian and as a writer of historical fiction and fantasy, Robert E. Howard was both a successful author of popular boxing stories and an avid amateur boxer himself. The sixteen stories and three poems collected in this volume show the full range of his talents for action, humor, and fistic philosophy. Ten of the stories feature the sailor Steve Costigan, a lovable, hard-fisted, and innocent...

If you only know REH from his Conan stories....

Published by Thriftbooks.com User , 13 years ago
you're missing out! Robert E. Howard was a proflic author of exciting stories, including westerns, swords and sorcery, adventure, and horror. Boxing Stories collects a sample of REH's sports stories, filled with bruising battlers who fight for a variety--but usually noble--reasons. Of note, the collection contains a story that REH regarded as one of his finest 'The Iron Men,' here presented as Howard originally intended.

Published by Thriftbooks.com User , 14 years ago
Boxing stories is a good sampler of R.E.H.'s sport fiction. Ten of the stories are from his humorous Sailor Steve Costigan series. The Spirit of Tom Molyneaux is an interesting combination of ghost and boxing story featuring an african american boxer, (fair warning, it contains non p.c.elements).Iron Men ,which Howard considered one of his best stories, is included in its original form, restored from the heavily edited version first published in Fight Stories Magazine in 1930. While Howard thought it one of his best,I think Fists of the Desert and They Always Come Back are actually better. They are gritty and realistic, telling of the shabby, brutal lives of low level boxers of that era.If you enjoy R.E.H.,sports stories,or just the style of 20's and 30's pulp fiction I think you will like Boxing Stories (the Works of Robert E. Howard).

Published by Thriftbooks.com User , 15 years ago
I got this book as an ongoing effort to collect as much of the works of Robert E. Howard as I can. But when I opened it and started reading, I was hooked! These stories are excellent. Short and quick to read, they are full of action, drama, humor, and really place the reader in the world they are set in. If you are a fan of the era, like boxing, or just wasnt a rousing read, I highly reccomend this book.

Published by Thriftbooks.com User , 15 years ago
Robert E Howard is a legend along with H P Lovecraft for writing hundreds of short stories for cheep pulps and getting hardly any money or recognition for their talent. While Robert E Howard is best known for his Conan stories, fans who look beond are rewarded. Such is the case with this collection of Boxing Stories. The stories are fantastic and completely over the top, and there is a vocabulary Robert E Howard uses skillfuly that will have you cracking up. The fight scenes play out like violent and gory Looney Tunes, and the diologue makes the charecters jump out of the page. Once you read a few of these short storys you'll begin to realise that this is a type of writing to be savored. Robert E Howard literally wrote the book on this type of fiction.
Copyright © 2020 Thriftbooks.com Terms of Use | Privacy Policy | Do Not Sell My Personal Information | Accessibility Statement
ThriftBooks® and the ThriftBooks® logo are registered trademarks of Thrift Books Global, LLC