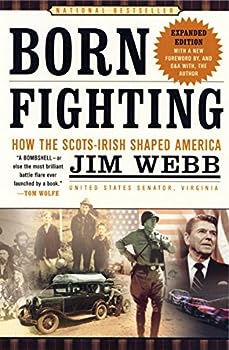 More than 27 million Americans today can trace their lineage to the Scots, whose bloodline was stained by centuries of continuous warfare along the border between England and Scotland, and later in... This description may be from another edition of this product.

Should be required reading before graduation from college

Published by Thriftbooks.com User , 14 years ago
Webb's book is a landmark treatise that puts Griffin's silly works into the trash heap. Like anyone who is 1/8th black is called "black", anyone 1/8 Scotch-Irish is Scotch-Irish (or Scots-Irish or Scot-Irish) if you prefer. He could have chosen to use Teddy Kennedy as an example of New England paternalism of blacks using the Scotch-Irish as the cause for all their misery, but he was above that. But the clear indictment of the Yankee elites is there. Like even George Will, supposedly "Mr Conservative" wrote when he betrayed his eastern elitism when referring to Virginia, "Where a slaveocracy once existed, northern dynamism has taken hold..." Webb puts all this condescendation where it belongs. This is a personal book, full of family and personal experiences, but all this is probably necessary to create the image of the Scotch-Irish whom the elites overlook to the point of not recognizing their existence. I could offer some criticisms, but I won't. The book is what it is, and as such deserves the highest rating. Read the bad reviews to learn why you must purchase and read this book. They approach hysteria in fear of this refutation of political correctness and what will probably eventually doom this American Republic. There are not enough Scotch-Irish left to maintain the culture in the face of overwhelming media, academic and elite propaganda, and the future is not something I wish to contemplate.

Published by Thriftbooks.com User , 17 years ago
If you are one of the million's of Scots-Irish whose ancestors migrated to America during the 18th century this is a "must read". It's a well-written history of these people. It goes back to when the Roman's invaded Britan and were stopped from going beyond the Hadrian's Wall where the Scots would stand their ground, refusig to let the Roman's into Scotland. It described for me the traits imbedded deep within m soul, and told me why I am the way I am. It brings to life the journey my grandfather (five generations back) made with three brothers from the Ulster plantation of Ireland in 1774. The hardships the must have faced from the time they landed on the shores of Maryland and made their journey along the trails of the Appalachian Mountains to North Carolina just in time for service in the American Revolutinary War. Let me say "Thank you" James Webb for taking the time and making the effort to write this book. You are a great author with a wonderful story to tell. Dixie Lackey, Strawberry, Arizona

Published by Thriftbooks.com User , 17 years ago
I had to log on and write a review of James Webb's brilliant and wonderful book " Born Fighting : How the Scots-Irish Shaped America." I bought the book in November, and after skimming through it and reading the first two chapters, I immediately ordered a copy for my father as a Christmas present. After finishing it, he told me it was the greatest present he had ever received, and that many of Webb's passages brought tears to his eyes. I highly recommend this book to anyone interested in American History, and for those millions of Scots-Irish Americans unaware of their heritage this is a must-read. In "Born Fighting" author James Webb chronicles the millennial struggle of the Scots-Irish people from fighting to preserve their independence against the Romans and the English, through their migration to Ireland, then to the hardscrabble Appalachian frontier and beyond. Webb describes how the values of these fiercely independent, determined and impoverished people pervaded the society and culture of America, and how their influence is reflected in such diverse institutions as NASCAR auto racing, country music, the evangelical movement, the U.S. Armed Forces, and American Democracy itself. Weaving distant history with personal family history, Webb details the struggle of these proud, impoverished people through their oppression by and resistance to the Romans, the English, the Irish Catholics, the Anglo-American pseudo-aristocracy of the Colonies, and the latter's successors, the so-called "Eastern Establishment." Through it all, the Scots-Irish survive oppression, scorn, war and poverty by drawing on their bottom-up, rather than top down social and political structure, and their collective fighting spirit to triumph. Webb's wonderful personal stories of his own family history cannot help but resonate with those Scots-Irish of today with similar backgrounds and experiences. It certainly did with me. Until I read this book, like many of the millions of Americans of Scots-Irish descent, I never knew I had an ethnic heritage. I am now glad to know that not only do I have one, it is a proud one and storied one. I owe a debt of gratitude to Webb for imparting this to me through this magnificent book. My father used to tell us as children that we were "Scotch-Irish." I didn't know what that meant at all until I took European History in high school. As an adult, I did some genealogical research on my family, gleaning what seemed to me to be loosely connected facts from church and census records. "Born Fighting" was invaluable in providing some context to what little I was able to learn. Along with my aunt, I traced my family history to the mid-1700s in western Virginia, through my Great-Great Grandfather who enlisted in the Confederate Army in Charlottesville, VA on the day after First Manassas. He served in the 57th Virginia Infantry, part of Gen. Pickett's division at Gettysburg that was virtually wiped out on the third and decisive day of that

WITH BOTH BARRELS AND A BOWIE KNIFE

Published by Thriftbooks.com User , 17 years ago
That pretty much sums up the combative attitude of the Scotch-Irish, the people chronicled in James Webb's latest book, Born Fighting. Mr. Webb retells the history of this fiercely independent and combative people from their earliest conflicts with Rome at Hadrian's Wall through their blood soaked settlement of America's backcountry right up to the present day. In retelling the story of the Scotch-Irish Mr. Webb provides a unique insight into what some have called America's warrior subculture. These are the people who fill the ranks of our military and fight our wars. They have provided this country with its finest pioneers and fighting men, men like Stonewall Jackson, Andrew Jackson, Sam Houston, Davy Crocket, Daniel Boon and Jim Bowie just to name a few. Nevertheless, the Scotch-Irish have contributed more to this country than just martial prowess. As Mr. Webb points out: "This people gave our country great things, including its most definitive culture. Its bloodlines have flowed in the veins of at least a dozen presidents, and in many of our greatest soldiers. It created and still perpetuates the most distinctly American form of music. It is imbued with a unique and unforgiving code of personal honor, less ritualized but every bit as powerful as the samurai code. Its legacy is broad, in many ways defining the attitudes and values of the military, of working class America, and even of the particularly populist form of American democracy itself. And yet its story has been lost under the weight of more recent immigrations, revisionist historians, and common ignorance." The ignorance that Mr. Webb refers to explains why the story of the Scotch-Irish has previously been overlooked. However, this ignorance is also due to one of the most pronounced traits of the Scotch-Irish, their individualism. According to Mr. Webb: "In their insistent individualism they are not likely to put an ethnic label on themselves when they debate social issues. Some of them don't even know their ethnic label, and some who do don't particularly care. They don't go for group identity politics any more than they like to join a union. Two hundred years ago the mountains built a fierce and uncomplaining people. To them, joining a group and putting themselves at the mercy of someone else's collective judgment makes about as much sense as letting the government take their guns. And no body is going to get their guns." This individualism is particularly pronounced in the area of religion. Mr. Webb states, "Their religion was a harsh and demanding Calvinism that sowed the seeds of America's Bible Belt, its on-your-feet independence instead of on-your-knees rituality offending English Anglicans and Irish Catholics alike." Aside from simply providing a well written account of the history of the Scotch-Irish, James Webb has given us a fascinating cultural analysis of a demographic that has more influence in this country's culture and politics than is popularly recognized. In fa

A must-read on American politics today!

Published by Thriftbooks.com User , 17 years ago
As a first generation immigrant to this country, this book should be required reading in all classrooms across America. Born Fighting reveals that revisionist history is being taught in schools today - among other things, that the Civil War was primarily about slavery, that affirmative action primarily benefits the descendants of American slaves, and that all whites in America are the same. The over-emphasis on political correctness today is the threat to the freedom that America represents, where America's history is vilified rather than remembered and honored, for both the good and the bad (primary example being the Confederate flag as a symbol of slavery rather than of those who justifiably and honorably fought for freedom). Born Fighting has made me appreciate more that the freedoms America provides are privileges rather than entitlements. We need to honor the Scots-Irish and others who fought to build this country and continue to fight for this country and yet are often overlooked when it comes to reaping the benefits accorded to newer immigrants, who generally don't appreciate fully the sacrifices of its past history. One need only look at the faces of the fallen soldiers in Iraq and where they came from to understand what James Webb is trying to tell us.
Trustpilot
Copyright © 2022 Thriftbooks.com Terms of Use | Privacy Policy | Do Not Sell My Personal Information | Accessibility Statement
ThriftBooks® and the ThriftBooks® logo are registered trademarks of Thrift Books Global, LLC