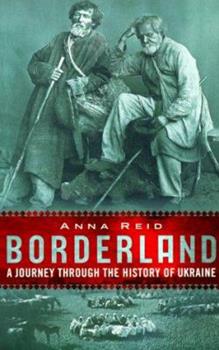 Borderland: A Journey Through The History Of Ukraine

Borderland tells the story of Ukraine. A thousand years ago it was the center of the first great Slav civilization, Kievan Rus. In 1240, the Mongols invaded from the east, and for the next seven centureies, Ukraine was split between warring neighbors: Lithuanians, Poles, Russians, Austrians, and Tatars. Again and again, borderland turned into battlefield: during the Cossack risings of the seventeenth century, Russia's wars with Sweden in the eighteenth,...

Published by Thriftbooks.com User , 16 years ago
This is a well written book, detailing the experiences of Ukrainians over the centuries and the author's experience raveling in modern Ukraine. Very insightful, and at the same time entertaining reading. TG Salem, NH

Published by Thriftbooks.com User , 18 years ago
"Flat, fertile, and fatally tempting to invaders," Ukraina as literally translated means "on the edge" or "borderland," wrote author Anna Reid in the beginning of her excellent travel, political, and historical essay on Ukraine. An independent state for the first time with the collapse of the Soviet Union in 1991, Ukraine has been on the border of various empires for centuries, at various times being split between Russia and Poland (from the mid 1600s to the late 1700s), Russia and Austria (throughout the nineteenth century), and Russia, Poland, Czechoslovakia, and Romania (between the two world wars). The fact that Ukraine is literally a borderland has resulted in two main things she writes; a legacy of wars, purges, and other violence, and a "tenuous, equivocal sense of national identity." Reid takes the reader on a tour of Ukrainian history beginning with the medieval Kievan Rus kingdom, a civilization that gave rise to the later Russian, Ukrainian, and Belarussian peoples and languages (though it is still debated what the exact relationship between these groups are), civilizations that really started to widen in differences when the northern Rus fell under the sway of the Mongols and the southern Rus (the future Ukrainians) became dominated by the Lithuanians. From then on Ukraine's history was often a bloody one; between 1914 and 1921 1.5 million died thanks to World War I, the Russian Revolution and subsequent civil war (during which there were two Ukrainian independence movements, both failing); the deliberate and cruel Stalin-ordered famines of 1932-1933 killed a fifth of the entire rural population or a total of 5 million people; many thousands of Ukrainians - out of a total number in the Soviet Union of 1 million executed and 2 million dying in labor camps - perished in the 1937-1938 purges; and 5.3 million died in the Second World War, or one in six of the entire population. The Chernobyl incident, which is also explored, may yet still claim lives. Understandably lacking a national tradition (as for centuries there was no "Ukraine" nor were there "Ukrainians," with at various times Poles and Russians refusing to respect Ukrainian culture, history, or language or even at times acknowledging its existence), they have struggled to find historical figures to identify with. One figure Reid discusses at length is the Hetman Bohdan Khmelnytsky (hetman being a title), a controversial figure who has been different things to different people (to the Ukrainians he was the leader of the first Ukrainian war of independence; to the Poles he was the rebel peasant who split Poland and started the nation on its long slow decline; to the Russians he has been the man who led the Ukrainians out of Polish domination and into the arms of Muscovy). Another she explores is Taras Shevchenko, a 19th century writer that many believe single-handedly turned Ukrainian into a literary language and went a very long way - perhaps more than any other figure - into cr

Very Enjoyable, and most informative.

Published by Thriftbooks.com User , 21 years ago
I purchased this book for research purposes (I needed some familiarity with Ukraine), and this book more than sufficed. Reid makes her book more of a narrative, providing glimpses at modern Ukraine as an introduction and conclusion to the sections of her history. For my purposes especially, this was invaluable. The book is not only informative, but also enjoyable (something a non-historian like me found refreshing). Reid gives a face to the Ukrainian people, and does well at showing an outsider the past of the nation. It has certainly piqued my curiosity about Ukraine, and what started as a small bit of research has grown into a genuine interest in the region.I think this book would be interesting to anyone, and is a great resource for those particularly interested in Ukraine.

Published by Thriftbooks.com User , 21 years ago
This is a brilliant travelogue that in the best tradition combines both history and culture with tourism and contemporary issues. It is highly recommendable to anyone interested in Ukraine, but who is not necessarily a historian or of that ilk. Once you begin you will be transported to another world and another time. Enjoy!

A wonderful and much-needed introduction to Ukraine.

Published by Thriftbooks.com User , 22 years ago
Having spent 6 years living in Ukraine, spanning the same period as the author, I can attest to the accuracy of this well-written introductory history book and description of the country during those turbulent and exciting years following Ukraine's declaration of independence. Borderland is a comprehensive overview of Ukraine's complex, misunderstood and often-altered history. Main events and periods have been artfully distilled and interestingly embellished with stories of the author's own experiences living in the country, providing a great deal more than just the facts, but also a taste for the rich culture of the Ukrainian people. Though the book was written several years ago and Ukraine has changed somewhat since that time, the stories are still pertinent if not 100% accurate. In all, Borderlnad is an excellent travel companion and introduction to a fascinating country well-worth exploring.
Trustpilot
Copyright © 2022 Thriftbooks.com Terms of Use | Privacy Policy | Do Not Sell or Share My Personal Information | Accessibility Statement
ThriftBooks® and the ThriftBooks® logo are registered trademarks of Thrift Books Global, LLC