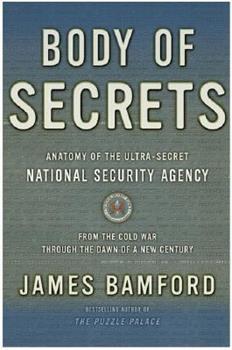 Body of Secrets: Anatomy of the Ultra-Secret National Security Agency

A no-holds-barred examination of the National Security Agency packed with startling secrets about its past, newsbreaking revelations about its present-day activities, and chilling predictions about its future powers and reach. The NSA is the largest, most secretive, and most powerful intelligence agency in the world. With a staff of thirty-eight thousand people, it dwarfs the CIA in budget, manpower, and influence. Recent headlines have linked it...

Deliberate and lethal Israeli attack on a US Navy ship

Published by Thriftbooks.com User , 20 years ago
Fascinating: worth the money if only for the chapter about the little known but brutal and ruthless attack on the USS Liberty by air and naval units of the Israeli Defence Force in which 54 US sailors were killed. The Israeli govt later claimed the attack was a mistake. They said they thought the Liberty, which was flying a huge US flag, was an Egyptian ship. What the Israelis did not know was that there was a US Navy EC121 flying far above the scene listening to all the damning radio calls of the attackers and to the pleas for help from the Liberty. The Israelis strafed and bombed the ship. Then torpedo boats torpedoed the ship, and machine gunned US sailors attempting to launch life boats. But why did they do all this? Read the book. It is a shocking eye opener. Highly relevent to current Israeli operations. The book and especially this chapter is must reading for any student of military and signal intellegence history .( See also "Attack on the USS Liberty" by William Gerhardt and "Conspiracy of Silence:Attack on the USS Liberty" by Anthony Pearson.

Published by Thriftbooks.com User , 21 years ago
I like this book because it is a deeply researched investigation of the National Security Agency, a part of the U.S. government that is always "in harms way", and because it offers up over 15 genuine journalistic investigative "scoops", shows how much can be learned about secret matters through persistent and professional exploitation of open sources, and paints a compelling dramatic picture of the honorable and courageous NSA employees, the less capable senior officers in the Joint Chiefs of Staff who risk their lives and do not provide them with emergency plans and air cover, and the man in the middle, LtGen Mike Hayden, whom the book portrays as a truly competent person who "gets it." This is the stuff of history and a very well-told tale.Among the "scoops" that I as a professional intelligence officer will list for the sake of showing how wide and deep the book goes, are:#1. Extremely big scoop. Israel attacked U.S. military personnel aboard the USS Liberty with the intent of simulating an Egyptian attack on US forces that would permit a joint US and Israeli retaliation. Even after the ship was destroyed, with very clear evidence from NSA tapes that the Israeli's deliberately attacked a US ship while the ship was flying US colors, President Johnson is reported to have betrayed his military and his Nation by covering this up, intimidating all survivors, and saying he would "not embarrass our allies." In consultation with my naval colleagues, I am satisfied that the author has it right. #2. US SIGINT failed as North Korea invaded South Korea. Our lack of preparedness, in both systems and linguists, was dereliction of duty at the highest levels. Fast forward to Sudan, East Timor, Burundi, Yugoslavia, Somalia, and Haiti. #3. US "Operations Security" (OPSEC) is terrible! Bad in World War II, bad in Korea, bad in Viet-Nam, bad in Somalia and bad today. This book is a stark and compelling indictment of the incompetence of U.S. military and political leaders who refuse to recognize that the rest of the world is smart enough to collect our signals and predict our intentions with sufficient effectiveness to neutralize our otherwise substantial power. #4. Eisenhower, as President, controlled the U-2 operations over Russia and lied to the world and the people about his individual responsibility for those missions. #5. US SIGINT failed in Arabia and against Israel. "The agency had few Arabic or Hebrew linguists and it was not equipped to eavesdrop on British, French, or Israeli military communications." We are often unable to sort out the truth in conflicts between Arabs and Israel, and this allows Israel to deceive and manipulate American policy makers. #6. In the early years of the Cold War, the US was the aggressor, and ran incredibly prevocational full bombing runs into northern Russia, simply to test for defenses and to see if it could be done. Young American military personnel were sent as expendable cannon fodder, with the ult

Published by Thriftbooks.com User , 21 years ago
Finally, Truth is told to the public, as to what really happened that horriable day. It's a shame so many things like this are kept secret because, politicians in plan words, are "Job Scared" I am a Surivor of the Delibert ATTACK of the USS LIBERTY, by Isarelie Air and Sea forces, I was not expected to live, due to the wounds I recevied. I appreciate the accuracy of the book and the way it was not a censored, watered down version. We need our Gov. to look out for the AMERICANS who preserve our Freedom, and not worry about an Ally being embarrassed!! Congress wants that wonderful pension, they have provided for theirselves so much, they will waste American lives to receive it. How SAD!R. Larry Weaver DAV

Published by Thriftbooks.com User , 21 years ago
This book is an astonishing volume, and I'm very glad I read it. Particularly amazing is the account of the attack on the USS Liberty by Israeli forces during the Six-Day War, an appalling slaughter of innocent American servicement of which I was previously unaware.Perhaps even more appalling is the account of Lyndon Johnson's subsequent handling of the situation and his willingness to bend over backwards to accommodate Israel.I'm astonished at the reviewers who refer to this book as "revisionist history" and attempt to cast the author as somehow being anti-Semitic. This is WAY out of line -- the comparisons to Mein Kampf in particular are ridiculous.The author is clearly unbiased and backs up his with fact after fact after fact. Bamford's account of the USS Liberty attack in particular seems extremely balanced and well-documented.At the very least, in light of the revelations in this book, the Israeli attack on the USS Liberty very clearly demonstrates the need for a fair, non-partisan Congressional inquiry that Bamford advocates. Every American should read this book, and I join Bamford in calling for a thorough, fair, unbiased Congressional investigation of this horrific tragedy.

In response to another "Reader Review"

Published by Thriftbooks.com User , 21 years ago
While I haven't completed reading Bamford's new book, the recounting of the USS Liberty story is fully consistent with all the facts previously recorded by the Captain and crew of the Liberty, and other military sources. It could not have been other than a deliberate assault on a virtually defenseless ship, an electronic surveillance ship, by an ally, Israel. Hard to believe, and the motive for the attack has been persistently denied by Israel, who officially call it a case of mistaken identity. There has never been a detailed investigation. Bamford has provided new, corroborative evidence that supports the survivors version which should make such an investigation mandatory. Excellent book, a deep-inside look at an agency most of us would have considered too "James Bondish" to be real.
Trustpilot
Copyright © 2022 Thriftbooks.com Terms of Use | Privacy Policy | Do Not Sell My Personal Information | Cookie Preferences | Accessibility Statement
ThriftBooks® and the ThriftBooks® logo are registered trademarks of Thrift Books Global, LLC