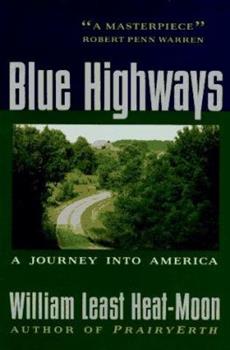 (Book #1 in the The Travel Trilogy Series)

Published in 1983 to phenomenal reviews, Blue Highways: A Journey into America became a cult classic on par with Jack Kerouac's On the Road and John Steinbeck's Travels with Charley. In this highly acclaimed, bestselling memoir, a 38-year-old laid-off college professor of Sioux and white blood drives around the U.S. on the "blue highways, " the rural back made that are colored blue on old maps. The places he discovers during his 13,000-mile journey...

Published by Betty Ritz , 3 years ago
I have not finished reading this book yet. I am enjoying it because he tells the story of his meeting with different people along the way. He gives history of places. Some of the places he has described I've been to as well. With the interstates now across our country, very few people take the time to travel the blue highways and see what life was before long concrete highways came into being. I like hearing about the different Native Americans that used to be in the various places he visits. I am telling others what a great book this is to read.

Published by Thriftbooks.com User , 16 years ago
William Least Heat-Moon's Blue Highways is referred to by many as a "cult classic". If so, it's a shame this book is not better known. It is 1978 and William Least Heat-Moon is 38 years old. Upon the near-simultaneous loss of his college teaching job and his marriage, he needs to get out of town, to leave places of sadness, futility and routine, to clear his mind and renew his soul. William leaves Missouri driving a '75 Econoline that he also intends to live in for the next several months; the truck has been named "Ghost Dancing". He has determined that he will drive only the blue highways, the old map color for single-lane rural highways and county roads, the roads that lead to all the small places in America, lost and forgotten by time, faded in economic or historic significance. He will travel and look around and listen, meet new people and learn new things and new ways of thinking. Most of all he will think, taking an inward journey as well. Born of English-Irish and Osage ancestry, William Least Heat-Moon also has an Anglo name. He writes, "I have other names: Buck, once a slur...also Bill Trogdon." He explains his Osage identity humbly: "My father calls himself Heat Moon, my elder brother Little Heat-Moon. I, coming last, am therefore Least. It has been a long lesson of a name to learn." With that we begin. Experts categorize this book as "travel literature". It is a travel book, for William does travel 13,000 miles across the United States and briefly through Ontario. He describes places, converses with people, learns or reviews history. As may be expected, the places are common and strange, mundane and magical. Some are pleasing and peaceful; others evoke indignance in William, unpleasantness and judgment. Most of the people are kind, some of them are wise. Some are alive with vitality and hope, others ghosts or near ghosts. But they are all human still, and in some way each is a gift. And that's what makes Blue Highways worthwhile: it is also a philosophy book, filled with the humanity of the author and the people to whom he gives voice. He is old enough to understand and appreciate the people and places he encounters, young enough to feel wonder and room to grow. Two special voices live within William Least Heat-Moon's head and heart: Walt Whitman and Black Elk. Whitman, the poet traveler who has seen it all before, rides along to chuckle occasionally or illuminate an experience or thought. Black Elk offers gentle guidance and comfort; he is a steady hand. It is inevitable that William Least Heat-Moon makes his way home. And it is not surprising that along the way he discovers that he can - that he has - "remade" himself. Blue Highways is beautiful book.

Published by Thriftbooks.com User , 20 years ago
This past spring I took a circular, nationwide roadtrip of my own very similar to the one William Least Heat-Moon takes in this great book. Though my trip was a little shorter in length and a lot shorter in duration, I can definitely identify with Heat-Moon's efforts at self-discovery on the back roads of America. The most interesting aspect of this book is Heat-Moon's use of his Indian heritage and frame of mind while interpreting the various persons and regional cultures he comes across. Christians may object to his criticisms of certain religious tenets, especially when he freeloads off some devout Christians for food and lodging a few times during the trip. Also beware of Heat-Moon's habit of quoting Walt Whitman practically every five pages, while he spends far too much space on certain people and places. But otherwise we have a highly compelling travelogue of the backwaters and isolated small town denizens of unknown America, as well as many insights into the soul of the writer, and possibly the reader if he/she is so inclined. Also, the journey described took place back in 1978, and while certain descriptions and narratives are outdated, Heat-Moon was already lamenting the disintegration of America's small town charm by the fast-food/convenience subculture, which was just getting started at that time. Little did he know how much worse it would get! This book, along with the works of Kerouac and Steinbeck, belongs with the great American roadtrip classics.

Published by Thriftbooks.com User , 22 years ago
William Least Heat Moon may be one of the greatest writers of our time. First encountered his work in the New Yorker, which excerpted chapters from Blue Highways. I then (of course) had to read the book, which is an account of his journey in an old van, outfitted for sleeping/living, to see the real United States using only the small roads (which are marked on the map in blue -- hence the title). The events that caused him to put his usual life on hold, and take up this oddyssey, will strike a responsive chord for many readers who have ever wanted to stop the world and step back in time. His experiences, the people he meets, the conversations they enjoy, make for an extraordinary insight into America.His writing sings in the way that the old story tellers did...weaving a web that captures and captivates you until you finish the book. And then you don't stop until you've read all of his books! (Wish he'd write some more). I recommend this book highly for personal reading and for gifts.

Favorite Book I own.

Published by Thriftbooks.com User , 23 years ago
I purchased this book at a point in my life where I was desiring escape, and the travelogue genre was obviously appealing. I have read it twice, and am reading it again, and cannot even hope to convey the warmth this book will give you. No matter what point you are at in your life, buy this book, you will not regret it. The author experiences a slice of life that we all wish we could, and his knowledge of the history of his route is astounding, and never presented in an intimidating fashion. He presents the people he meets as they are, and both he and us come away the better for it. Appreciating the simple pleasures in life is underrated, and this book cannot be overrated.

Blue Highways is the last roadmap you'll ever need

Published by Thriftbooks.com User , 23 years ago
I ended up buying 17 copies of Blue Highways before I finally got all the way to the end of it, because I kept giving the one I was reading to friends that I knew would enjoy it as much as I did. Each year since, re-reading Blue Highways melts away the hibernation chill of winter by rekindled the fire of wanderlust and the need to eat some "ho-made pie" at a four-calendar cafe. My own "blue highway" pinacle was a memorable lunch with my college roommate during a two-lane cross-country trip where we found ourselves in a booth in a diner named Grandma's where the menu was what Grandma told us she had cooked for the day and we knew we had hit blue highway heaven when she scolded my friend, smacked his hand with a big wooden spoon and told him he couldn't have both potatoes and macaroni and cheese, that he had to eat a vegetable or she wouldn't let him have any pie for dessert. I caught her winking at the trucker at the counter, and he said that even though he hated vegetables himself, he had eaten them there every day for 20 years because Grandma's pies were worth it. He was right. Here's how Blue Highways reveals the secret to eating well on the road: "There is one almost infallible way to find honest food at just prices in blue-highway America: count the wall calendars in a cafe. No calendar: Same as an interstate pit stop. One Calendar: Preprocessed food assembled in New Jersey. Two calendars: Only if fish trophies present. Three calendars: Can't miss on the farm-boy breakfasts. Four calendars: Try the ho-made pie too. Five calendars: Keep it under your hat, or they'll franchise.One time I found a six-calendar cafe in the Ozarks, which served fried chicken, peach pie, and chocolate malts, that left me searching for another ever since. I've never seen a seven-calendar place. But old-time travelers - road men in a day when cars had running boards and lunchroom windows said AIR COOLED in blue letters with icicles dripping from the tops - those travelers have told me the golden legends of seven-calendar cafes."No maps are needed to travel Blue Highways. Just make sure you eat your veggies and don't make Grandma smack you with that big wooden spoon of hers and enjoy your pie.
Trustpilot
Copyright © 2022 Thriftbooks.com Terms of Use | Privacy Policy | Do Not Sell or Share My Personal Information | Accessibility Statement
ThriftBooks® and the ThriftBooks® logo are registered trademarks of Thrift Books Global, LLC