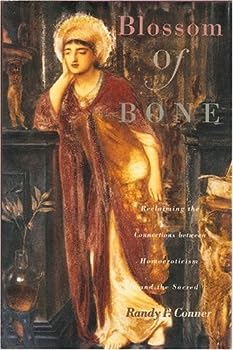 Blossom of Bone - Reclaiming the Connections Between Homoeroticism and the Sacred

The first multi-cultural exploration of the sacred experience, roles, and rituals of gay and gender-bending men, from the ancient priests of the goddess to Oscar Wilde and pop music icon Sylvester--a rich tradition of men who have embodied the interrelationship between androgyny, homoeroticism, and the quest for the sacred. Illustrations and photos.

Published by Thriftbooks.com User , 13 years ago
Although I have a degree I can slap behind my name, I prefer to view this work through the lens of a modern-day, homosexual Priest of the Goddess. There is much more to this work than footnotes, feminism, and fear. What Connor has done is gathered together many fragments of shattered religions and, like pieces of ancient pottery, presented a picture of religious practice that simply hasn't existed in any official form in centuries. He has provided a much-needed glimpse into the past, which is simply overlooked by most of modern society, to provide for those of us today the knowledge that, yes, we at one time played an important role within religion and spirituality (despite what fundamentalist religious zealots would have us believe) and, yes, we have every right to re-claim our place in today's changing world of religion and spirituality. For me, personally, this book is one among many that shows that the Goddess (or the Divine Feminine, take your pick) was never completely subdued, and She is taking her rightful place once again within the kaleidoscope of human religious experience and spirituality. In addition, this work shows by its very existence that ALL of Her former clergy, not just Priestesses, is being resurrected. Those of us who actively serve a Goddess or "The Goddess" who are also homoerotically inclined should all have a copy of this book. I won't say that it has dramatically changed my life, but has certainly fanned the flames of my devotion and service.

A Classic History of Queer Spirituality

Published by Thriftbooks.com User , 18 years ago
I made the mistake of not picking up Randy Conner's "Blossom of Bone" when it first came out in 1993, and several years went by before I finally got around to reading this remarkable book that has become a classic historical study of queer spirituality. The premise of the book is that people who demonstrate certain characteristics (homoerotic behavior, gender variance, and spiritual aptitude) have been relied upon as spiritual functionaries in societies throughout history and in every inhabited part of the globe. This role of the "transformed shaman" is central to the development of religious practices up to the present day, and is worthy of reclamation as LGBT individuals seek to re-establish themselves as persons integral to the health and well-being of their societies. Conner lavishly illustrates his case with examples spanning the dawn of human awareness, tribal survivals in Africa and the New World, classical European societies, China and Japan, Meso-American civilizations, and modern spiritual paths such as Ceremonial Magick, Neo-Paganism, and Witchcraft. Following in the wake of earlier authors (e.g., Arthur Evans' "Witchcraft and the Gay Counterculture" and David Greenburg's "The Construction of Homosexuality" come to mind), Conner's richly-referenced work lays out a compelling case for his premise. Sadly, this book has been out of print for several years now, but I would encourage the serious student of GLBT history and spirituality (in particular, my Pagan brethren) to add this book to their libraries. Highly recommended.

Published by Thriftbooks.com User , 18 years ago
What an incredible book! A must for anyone interested in integrating their spirituality with their sexuality. A vast amount of information that surveys LBGT spirituality throughout world history and cultures. An excellent book!

Published by Thriftbooks.com User , 19 years ago
This book tells the best kept spiritual secret in the world. In fact, it is the one secret that will make priests and scholars literally foam at the mouth at its very mention. Yet, it is undeniably true. What is this great secret? Just this, mankind's first, truest, and best spiritual guides were transgendered. Some hold that this statement is an obscenity and blastphemy, but the true obscenity is what patriarchically usurped religion has done to the memory, and the living representatives, of this natural priestesshood. I've read this extremely well documented volume three times now. The case is air tight. Not only that, it has the ring of truth. The historical evidence is overwhelming: Angakok, Assinnu, Basir, Enaree, Fanatici, Gallus, Kelabim, Mahu, Manang bali, Megabyzos, Mexoga, Mwammi, Osasenge kimbanda, Qeeshshim, Winkte, 'Yan Daudu. Almost universally, traditional cultures had their gender-varient practitioners. Why is this, you ask? The answer lies in shamanism- the "first" spiritual path. The shaman naturally transcends all boundaries, heaven/earth, life/death, sane/insane, male/female. To become one and unified in the Spirit is to transcend all dualities- even male/female. Male/female (Yin/Yang)- this is also the origin of Taoism. Why is it that you have never even heard of this? Well, for one thing the Vatican sits on ground stolen from the sanctuary of Cybele- and her gender-varient priestess's the Gallae.... I have no idea why this book has not recieved the recognition it deserves. It is one of the greatest works of spiritual scholarship of our age. Only profound levels of bigotry and closed-mindedness can explain the silence....
Copyright © 2022 Thriftbooks.com Terms of Use | Privacy Policy | Do Not Sell My Personal Information | Accessibility Statement
ThriftBooks® and the ThriftBooks® logo are registered trademarks of Thrift Books Global, LLC