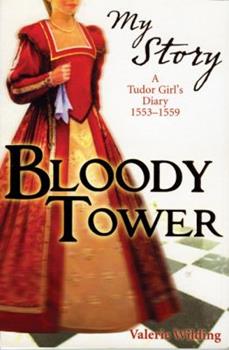 (Part of the My Royal Story Series and My Story: Girls Series)

Tilly lives in turbulent times. It's the 1550s; when Queen Mary ousts Lady Jane Grey to win the throne, her executioners are kept busy. Even Princess Elizabeth is imprisoned in the Tower. As Tilly... This description may be from another edition of this product.

A good book from the My Story series.

Published by Thriftbooks.com User , 17 years ago
This book is one in the My Story series. The books in this series are fictional diaries of young girls living during different periods of British, Scottish, and Irish history. Tilly Middleton is thirteen years old in the spring of 1553, when she begins her diary. She and her family live at the Tower of London, where her father is the physician. She describes her life at home, doing chores and helping care for her younger siblings, as well as the events of the day in England. It is a time of great turmoil, as the young king, Edward, dies, and his Catholic half-sister, Mary, becomes Queen of England. During Mary's reign, many people are kept at the tower as prisoners, including Mary's Protestant half-sister, Elizabeth. I enjoyed this book from the My Story series a lot, as I particularly like this time period, but the book covered a long time period, and as a result, the later half contained a lot less detail than I would have liked, so I wish it were longer. However, I still recommend it to readers who enjoy historical fiction in diary format or who have an interest in this time period.
Copyright © 2022 Thriftbooks.com Terms of Use | Privacy Policy | Do Not Sell My Personal Information | Accessibility Statement
ThriftBooks® and the ThriftBooks® logo are registered trademarks of Thrift Books Global, LLC