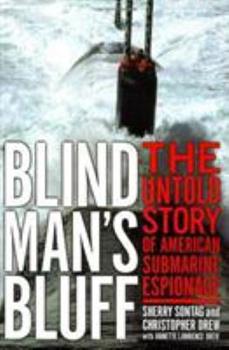 by Christopher Drew and Sherry Sontag

Over the course of five years, investigative reporters Sherry Sontag and Chris Drew interviewed hundreds of men who had never spoken about their underwater lives--not even to their wives and children. They uncovered a wealth of classified information: the tapping of undersea Soviet telephone cables, the stealing of Soviet weapons, the tragic collisions of enemy submarines. They tell of medals awarded in secret and deaths disguised with disinformation...

Published by Betsy B. , 3 years ago
This is a riveting story ( true) of submarines and the dangers involved in the risks underwater. A thriller and several people have borrowed it & read it.

A Bookshelf 'staple' for any Navy man.

Published by Thriftbooks.com User , 3 years ago
This book describes the details of many of the submarine encounters and mishaps that could only be mentioned, but not discussed in detail while I was a student in Nuclear Power School in 1971. This one describes in detail what happened, where, and when. Can't tell you how many times I've lent this book to fellow sailors in my workplace, both submariners and surface sailors as myself. Interviews with crew members, officers on both sides of the world made it very interesting, and sometimes surprising. All this info is now de-classified, and some commanders still would not discuss with the authors regardless of declassification. I'm on my second copy now, since the first one got lent out and never returned. What a read for a Navy man regardless of what type of vessel you served on!

Published by Thriftbooks.com User , 21 years ago
This book was an intense page-turner, every chapter detailed the dangerous and often surprising measures the US Navy took to spy on the Soviet Union. The early attempts with diesel subs soon exposed their limitations but with Admiral Rickover's wonder sub Nautilus would emerge the perfect espionage platform. Follow the true-life adventures of the USS Halibut as it searches for Soviet sub wreckage, the deadly cat and mouse game that occurred between US and Soviet subs that often led to dangerous collisions and the deadly secret that may have killed the crew of the USS Scorpion. Packed with numerous interviews and testimonies from both US and former Soviet naval crewman, the novel truly opens up the world of submarine warfare and the measures taken win the undersea Cold War. A great novel for anyone who is a fan of Tom Clancy style adventures; this is the real life Hunt For Red October. Be sure you watch the excellent History Channel program based on the book.

Published by Thriftbooks.com User , 21 years ago
Confronted with fading memories, secrecy oaths, security clearances and old loyalties, the authors have done an outstanding job writing a fascinating account that rivals the best cold war fiction. This is a true story of American submarine espionage during the cold war and as the authors note "In silence and stealth, but most importantly in secrecy, attack subs carried out as many as two thousand spy missions as they kept track of Soviet submarines". In chronological order, the book covers US submarine surveillance during the cold war beginning with the loss of the diesel submarine USS Cochino and ends with the post cold war secrecy problems still facing the families of lost submarine sailors on both sides. Narratives are given for several incidents such as the submarine USS Gudgeon being caught in Soviet waters and forced to the surface by the Soviets. A most intriguing chapter covers the 1968 loss of the US nuclear submarine Scorpion as it returned from a mission to the Mediterranean Sea. Using acoustic data, a submarine simulator and advanced mathematics, it took nearly five months for scientists to locate the Scorpion. Although the evidence points to an on board torpedo explosion, to this day the cause of the sub's lost is still in dispute.Blind man's bluff involved tracking Soviet subs, surveillance of missile launches and communications monitoring. Soviet subs were trailed by US submarines to determine the submarine's characteristics, patrol areas plus Soviet Naval operational philosophy and tactics. The book contains a fascinating account of the USS Lapon tracking a Soviet missile sub for 47 days. However, tracking was dangerous. There were several underwater collisions, with the text describing the one where the USS Tautog collided with the Soviet submarine Black Lila. The book states "Tautog flipped on her right side, rolling nearly 30 degrees as she was forced backward and down. Men went grabbing for a handhold on rails and tables. Coffee mugs, pencils, rulers, charts and erasers went flying through the control room." While both submarines were heavily damaged, neither sub sank, although each submarine's commander thought the other had sunk. In a post cold war interview, the Black Lila's commander stated "I thought for a second, `I have sunk a brother submariner'....It was hard to have realized it."The book narrates the US attempt to raise a sunken Soviet submarine. After locating the sub, Naval Intelligence proposed to remove missiles and code materials using robots. The CIA disagreed, intervened, and took over. Ignoring international law, the CIA contracted with Howard Hughes to build a special ship to recover the entire submarine under the pretex of searching for manganese. The project failed with only a 38-foot piece recovered. The Naval Intelligence's approach was validated years later when Navy robots were successfully used to explore the Titanic. The book's high point is the narrative of wire taps on Soviet cables in t

A great read for anyone into submarines or espionage

Published by Thriftbooks.com User , 22 years ago
Imagine if you will that you are onboard a US Navy submarine that has just snuck into Soviet territorial waters to spy on what the other side's navy is doing. From the sonar members of the crew can listen to the screw noise and learn turn counts that identify different Soviet Naval ships and submarines that are plying the seas around you. Your submarine-in this case the USS-Tautog (SSN-639) is here to gather intelligence on Soviet cruise missile submarines that could pose a threat to US carriers. Your captain, in this case Commander Buele G. Balderston drove his sub deeper into Petropavlovsk whereupon they collided with a Soviet Echo-II class attack boat. This was 1970, the half way point in the Cold War, one of three accidents that year, and all of them chronicled in Sherry Sontag, Christopher Drew and Annette Lawrence-Drew's `Blind Man's Bluff-The Untold Story of American Submarine Espionage'. While the title may sound like some cheesy hack banged the book out and filled it with questionable information, `Blind Man's Bluff' takes the moderate approach, the authors admitting that sometimes the information is sketchy at times, and speculate on what probably happened, corroborating information from those directly involved aids in fleshing out the true stories told within the book. It details the disastrous first attempt to spy on the Soviets in 1949 when disaster struck the ill-fated USS-Cochino when one of it's batteries exploded, leaving the submarine to flounder in sixteen foot swells before eventually sinking off the coast of Norway. It's crew was rescued by her sister ship, the USS-Tusk, but not before six crewmen were killed-drowned in the stormy seas. The book also talks at some length about Admiral Hyman G. Rickover, the man who singlehandedly created a nuclear navy for the United States. It details Rickover as being a power hungry, arrogant and petty man who made or broke careers as he saw fit, and someone who demanded to know about any projects `his' boats were involved with. Evidence, whether it be technical or personal, is often presented in anecdotal form, often amusing and always enlightening. It praises the Navy as often as it chastises it and allows the reader to develop their own opinions on whether an action was right or wrong. However, with regards to the 1968 sinking of the USS-Scorpion, it attacks the establishment-the Navy and her departments for a cover-up that has gone on for thirty-two years. When the Scorpion went down, she was in such a sorry state of repair, that one crewmen had been removed over fears expressed in letters written to his superiors. However, it wasn't the fact that Scorpion seemed to be falling apart that caused her to sink, rather a defective torpedo battery leaking within a torpedo and cooked off the 350 lb HBX warhead contained within the weapon that caused her to go down. Memos written from the Naval Undersea Warfare Engineering Center told of the defective batt

An Exciting Movie In My Head

Published by Thriftbooks.com User , 23 years ago
Normally I don't read books with "military" subjects or "tales of the sea". I said to myself, "Whats the heck". From page one, I couldn't stop reading it. I lived with the book for many days. You get the feeling you will miss out on something, if you stop reading, even if it is just a book. The writing was breath taking, you want to know what's going to happen next. Will they figure out how to get the sub out of this situation? Was truly amazed with the story of spying, getting so close and almost getting caught. The authors painted a vivid picture of what was going on. Men overboard freezing in the high waves or the President talking in the oval office to Henry Kissinger. The book was a movie in my head.

Published by Thriftbooks.com User , 23 years ago
I was on one of these nuclear subs, Spadefish SSN-668, from 73 to 77. I thought some of the things WE did were unbelievable, but after I read this book, even I was overwelmed by some the the events that took place while I was kept in the dark (90 days) , twenty years ago today.
Trustpilot
Copyright © 2022 Thriftbooks.com Terms of Use | Privacy Policy | Do Not Sell or Share My Personal Information | Accessibility Statement
ThriftBooks® and the ThriftBooks® logo are registered trademarks of Thrift Books Global, LLC