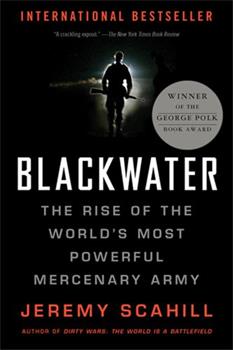 Blackwater: The Rise of the World's Most Powerful Mercenary Army

The groundbreaking bestselling expose of the shadowy mercenary army that perpetrated horrific war crimes in America's name. On September 16, 2007, machine gun fire erupted in Baghdad's Nisour Square, leaving seventeen Iraqi civilians dead, among them women and children. The shooting spree, labeled Baghdad's Bloody Sunday, was neither the work of Iraqi insurgents nor U.S. soldiers. The shooters were private forces, subcontractors working for the secretive...

Published by Thriftbooks.com User , 15 years ago
"Blackwater" by Jeremy Scahill is a chilling story about America's fractured democracy. Mr. Scahill has written skillfully about an underreported issue that should be a cause of alarm and concern for everyone. Supporting his narrative with painstaking research and analysis, the author shows how modern mercenary forces are empowered by a potent mix of neoliberal, national and religious ideologies. That Blackwater and other unaccountable private armies have the firepower to disrupt most governments and have been deployed on U.S. soil makes it clear that America is currently subverting its democratic ideals in its pursuit of imperial power at home and abroad. Mr. Scahill profiles the founder of Blackwater and his privileged family's long history of activism in extreme right-wing political and religious causes. We learn that Blackwater first found a niche for its services in the 1990s when it gained advantage from the relatively modest outsourcing tendencies afforded to it by the Clinton administration. Of course, the latter Bush administration's agenda of channeling as much government largess as possible to its corporate patrons in the energy, defense and other strategic industries opened the floodgates for Blackwater and other security firms, especially in the wake of public anxiety and fear stemming from the 9/11 attacks. However, the author draws our attention to the fact the fog of war has allowed billions of dollars to be irresponsibly spent on security projects with little to no oversight and with questionable benefit to taxpayers. The tragic act of mob violence that claimed the lives of four Blackwater employees is detailed by Mr. Scahill. The soldier's families share their anger about Blackwater's negligence in the incident. In discussing the families' pursuit of justice, the author reveals how Blackwater has managed to successfully evade legal accountability for its actions. We understand that the Bush administration's legal maneuvers in support of Blackwater suggests how much the government values the strategic role that mercenary forces might be playing with respect to prisoner renditions, torture and other shadowy activities that are supposedly justified by the war on terror. Mr. Scahill goes on to discuss many other related issues, including the role of mercenary forces in protecting government officials and supply routes in the Iraq War; the overthrow of governments and pipeline protection in the Caspian Sea region; the deployment of Blackwater forces to New Orleans; and the incorporation of a Blackwater subsidiary in Barbados that positions its services outside U.S. jurisdiction and control. The evidence collected by Mr. Scahill demonstrates that violence can and will be purchased by governments who wish to impose policies without the constraining influence of popular consent; worse, these forces are becoming readily available to corporations and individuals who might be seeking to consolidate or gain power. Obviously, these devel

So many one-star reviews for a very good book.....

Published by Thriftbooks.com User , 15 years ago
I almost didn't buy this book because of the poor reviews (many written almost before the book came out, I must add), but decided to purchase it anyway, and I'm glad I did. It is well-written, thoroughly researched, and it is an expose of a company that every American should be aware of. I highly recommend it. Blackwater scares me. One of the blurbs on the back of the jacket says they are just like Saddam's Republican Guard, and while I disagree with that, if they continue on the road they're on, it could happen. They are fighting our wars, lobbying for fighting other wars, and for "peacekeeping" (something they're not very good at) missions in places we have not yet interceded. They were first-responders in Katrina, bringing guns and ammo, not supplies, for desperate people. The scariest part is that they can kill with impunity, and I'm quite sure they do. It is also difficult to tell where the government ends and Blackwater begins, as people travel back and forth from high-level government positions to high-level Blackwater positions. There is no accurate record of how much money Blackwater is actually making in our military conflicts, but through the maze of contractors, sub-contractors, sub-sub, etc., it is very difficult to imagine they are saving the government money as they claim. The lack of oversight is the most frightening. No one seems to know what they are REALLY doing in Iraq or Afghanistan. If we are going to be outsourcing our wars, there needs to be oversight and accountability.

An unflinching serious work of journalism

Published by Thriftbooks.com User , 15 years ago
I read this book in one night after hearing Mr. Scahill speak in Washington DC. The book is a remarkable and bracing wake up call about the privatization of war and how that subverts even basic notions of democracy. I find it remarkable that people criticize Mr. Scahill for using terms like "radical Christian right" - as if these terms are caricatures and ad hominem attacks. Hardly. In fact Schaill then spends hundreds of pages breaking down exactly what is so "radical Christian right" about Blackwater. He is a serious journalist who has uncovered a story that is both illuminating and frightening. It's hard to have any respect for people who say "I didn't even get to the first page" and then feel like they can write a review on its content. Last point: As good a writer as Scahill is, he's a better public speaker. People should go hear what he has to say. These aren't easy truths to consume, but they are truths that define and explain the current calamaties unleashed on the world

Published by Thriftbooks.com User , 15 years ago
I'd like to start by saying that I was a Republican once, when that meant smaller government, staying out of your neighbor's business and taking care of yourself. The level of outright corruption by the Bush Administration has been exposed before, but this is an excellent exposition on the very successful attempts by Christian Fundamentalists to privatize war. While our Constitution says that it's the job of government to "provide for the common defense," the neoconservatives and the military-industrial complex have clearly conspired to bleed our treasury at the expense of our liberty. The author has carefully documented his case and many of the accounts of the individual Blackwater mercenaries themselves are sympathetic. If you are a student of history, you will be intrigued by the similarities between our efforts to utilize mercenaries and that of the Roman Empire in its decline. What struck me most was the fact that I had missed the complicity of the media in reporting about the deaths of "civilian contractors," whenever mercenaries died in the war zones. The chapter about Blackwater's involvment in New Orleans after Katrina should make all of us fear for our personal liberty.

Published by Thriftbooks.com User , 15 years ago
Don't believe the reviews on this page smearing this book. Jeremy Scahill has written a meticulously documented book about an all-too-real threat to democracy. And not just in war zones, where Blackwater operates in concert with U.S. forces, but without the accountability, however flawed, of the official military. They appeared, as Scahill documents, on the streets of New Orleans and around the Gulf Coast as a security force. This was in a situation where what was desperately needed was more humanitarian operations--food, rescue, emergency housing. But the Bush administration decided to devote funds to their colleagues from the war zone. Scahill exposes all of this, based on his own eyewitness reporting and on a meticulous analysis of Blackwater's history and operations. By the way, I'm a reporter and editor who has found Scahill's articles extremely valuable, and in any of my following and checking of his stories, I've never found a single point that didn't hold up. The reviewers here may not like the facts he presents, but they are facts.
Trustpilot
Copyright © 2022 Thriftbooks.com Terms of Use | Privacy Policy | Do Not Sell or Share My Personal Information | Accessibility Statement
ThriftBooks® and the ThriftBooks® logo are registered trademarks of Thrift Books Global, LLC