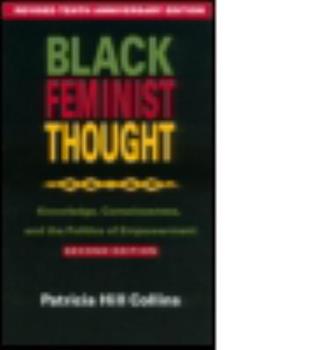 In spite of the double burden of racial and gender discrimination, African-American women have developed a rich intellectual tradition that is not widely known. In Black Feminist Thought, Patricia Hill Collins explores the words and ideas of Black feminist intellectuals as well as those African-American women outside academe. She provides an interpretive framework for the work of such prominent Black feminist thinkers as Angela Davis, bell hooks,...

A dense but accessible read

Published by Thriftbooks.com User , 13 years ago
This book is dense with thoughts and ideas, written in a looping structure that weaves the vast diversity of black women's voices into a colorful tapestry of intricate detail and contradiction. This is its strength, and its weakness. Collins specifically avoids exclusivity, and this means she includes a few... well, "out there" thoughts from others. Most notably, she cites Tuan on p 139 who asserts that people go to zoos to see monkeys copulate. But this is an extreme, and very rare. More commonly, she grounds these diverse thoughts in real-world experiences. Most impressively, she makes the case that intellectual thought is not limited to the academy, but must include all those who think seriously about their lives. This means that groups - such as Black women - who have been historically excluded from the academy can rediscover their own intellectual traditions outside of academia, and tie them all together. I am glad that I read this book. It has many perspectives I simply was not aware of before I opened it. While I may not agree with all of Collins' assertions, I definitely respect them. It is a dense book, but the very structure of it makes it accessible through its layering technique. Further, Collins writes in a unadorned style that makes absorbing unfamiliar viewpoints all the easier.

Great Book for All People

Published by Thriftbooks.com User , 17 years ago
I'm a gay white male and I loved this book! Collins does an amazing job presenting her compelling thesis, and I continue to thank Sociology in general for being the most daring, critical-thinking academic discipline ever. It's no surprise sociologists like Collins dare to speak out on gay rights issues (see her section on homophobia/heterosexism) - sociology is the only area of thought that consistently questions the status quo. In a day in age where so many (though by no means all!) African-American (heterosexuals) are horribly anti-gay and increasingly pro-greed/pro-capitalism, Collins stands out as a heroine for all peoples. I am still waiting for an openly gay hip-hop artist!! How cool would that be? I recommend this book to absolutely anyone. Five stars!

Published by Thriftbooks.com User , 20 years ago
Patricia Hill Collins exemplifies a practitioner's and theorist's point of view on black feminism as it relates to Africa American and our African sisters. She references critical and inspiring data and quotes from a varied repetoire of authors, historians, and philosophers. The author explains the context and format of her subject upon initial reading. This book also draws commonalities among the issues and concerns among African American women and our international sisterhood (i.e., African, Carribean, etc.,) It illustrates the social and cultural values among all groups, the commonalities among the values while focusing on the African American feminist aspect. This is a must read for any person, be it woman or not, African American or other. It brings about a social and cultural understanding that is pertinent to the "holonomy" of understanding and appreciating varied cultural, social and historical values and experiences while commencing to the building of community. Please add this title to your collection of literature. You won't be disappointed; if for nothing more than to open your world to receive another perspective.

Published by Thriftbooks.com User , 21 years ago
Collins'analysis of black feminism is an enlightening piece of literature that forces its readers to chanllenge main stream assumptions and discover the underlying mechanisms of racism and sexism in America. To create this effect, she uses a range of feminist perspectives form the calm subtleties of Angela Davis to the slightly boisterous philosopy of Bell Hooks. Nevertheless, by displaying these perspectives equally Collins shows that the struggle for equally is not an individual struggle but one that requires collectively. This book is intensely thought provoking and it is guaranteed to give its readers profound insight into black feminism.
Copyright © 2020 Thriftbooks.com Terms of Use | Privacy Policy | Do Not Sell My Personal Information | Accessibility Statement
ThriftBooks® and the ThriftBooks® logo are registered trademarks of Thrift Books Global, LLC