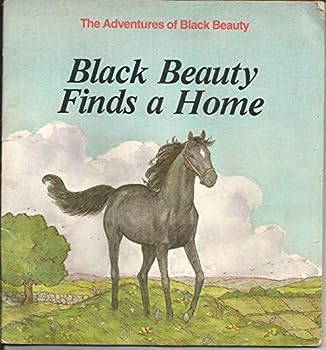 (Book #4 in the The Adventures of Black Beauty Series)

This description may be from another edition of this product. Black Beauty relates his experiences with a cruel owner followed by his sale to three ladies and his subsequent reunion with his stable boy of ten years earlier.

I have now lived in this happy place a whole year

Published by Thriftbooks.com User , 16 years ago
I love this book of "The Adventures of Black Beauty: Black Beauty finds a home" and it's about when Black Beauty relates his experiences with a cruel owner followed by his sale to three ladies and his subsequent reunion with his stable boy Joe Green of ten years earlier from Squire Gordon's stables. This is a great book and all of my favorites. On page 29, Joe Green's hands are touching the horse's face because he realizes that he once had cared for a horse who had a white star on the forehead and one white foot. Then he knows it's Black Beauty. I have a little something to say a little something to match that book. My Last Home Two sisters who owned the nearby manor house came to see me. They were the Miss Bloomfields, and they wanted a horse. They were not sure about me, especially when they saw the scars on my knees, but they decided to give me a trial. The next morning, the second sister spoke and told Mr. Thoroughgood to let their coachman to have a look at him first. Then Mr. Thoroughgood said, "Of course, Willie, you must now run to the stables and fetch the coachman because there's a good lad." Willie ran off, and returned a few minutes later with a handsome young man. So when the coachman saw that horse he carefully looked me over. "Why I one knew a horse with those white markings. Can it be! I know this horse! He is really Black Beauty!" The other looked surprised. "Black Beauty?" Mr. Thoroughgood asked. Then he threw his right arm around my neck because he was so happy to see me again and my new groom was Joe Green, John Manly's young assistant! Then Joe told the Miss Bloomfield's all about me. As they knew Mrs. Gordon, they were delighted and promised that I would never, ever be sold again. So my troubles are all over, and I am at home. Often, before I am quite awake, I fancy and dream I am still in Squire Gordon's orchard at Birtwick, standing with my old friends under the apple trees. "You're Black Beauty! I almost killed you when you were at Squire Gordon's" said Joe Green, my new groom and... I have a little something to go with this as well and it would go: They were delighted to find me a home with three country ladies. Their coachman was even more delighted when he spotted that little sprig of white hairs on my back and recognised me as Black Beauty. The coachman was Joe Green. I wouldn't have recognised little Joe. He was a grown man and had become the best and kindest of coachmen. The work here is pleasant and young Willie and my old friend Joe had mad the ladies promise I'll never be sold. My troubles seem over and I feel really at home -- as much at home as in those far gone days when I stood talking to my friends beneath the apple trees at Birtwick Park. This is one of the greatest and bestest books ever and that book puts me in mind of the 1986 National Finals Rodeo in Las Vegas, Nevada when Chris Lybbert was the 1986 world champion calf roper. Well, I loved and enjoyed this book. I really liked Joe Green bec
Copyright © 2020 Thriftbooks.com Terms of Use | Privacy Policy | Do Not Sell My Personal Information | Accessibility Statement
ThriftBooks® and the ThriftBooks® logo are registered trademarks of Thrift Books Global, LLC