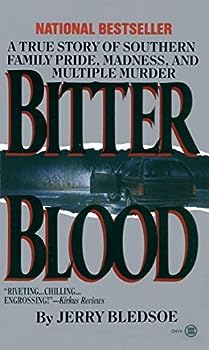 Published by Thriftbooks.com User , 3 years ago
Never Got To Read The Book. Vendor Sent Me A Severely Damaged Book. Left Side Of Inside Cover Was Partially Torn Away From The Rest Of The Book. Sending It To Me In That Damaged Condition Was A Total Waste Of Time. I Ended Up Throwing The Book Away In The Trash. Vendor Would Have Been Better Off To Tell Me The Book Was No Longer Available And Send Me A Refund.
Published by Thriftbooks.com User , 6 years ago
This "story" was riveting from start to finish. I lived right outside of Greensboro, NC, and that made it even more relevant for me. I'm glad I read the book before I saw the movie, because I did not like the movie at all; it just didn't ring true to the characters. Fascinating read!!

Published by Thriftbooks.com User , 16 years ago
Jerry Bledsoe has created an incredible examination of the murders of Delores and Janie Lynch in Kentucky, and Nanna, Bob and Florence Newsom in North Carolina. All of the victims, murderers, and their family members' lives, hopes and personalities are delved into, and we get a good picture of what happened. Why, unfortunately, is a matter of speculation, but with all the information provided we can come up with an understanding. Many of Susie Lynch's family wouldn't believe she would knowingly be involved in those murders, and ultimately in the deaths of her boys, even after evidence suggested otherwise. And for years Fritz Klenner was able to deceive everyone about his education, his career, and his dark side. I believe Susie was just as fanatical and paranoid as Fritz and they fed off each other. The two of them ultimately lost touch with reality completely and sacrificed two young innocent boys, in what for them seemed to be the only solution. As I read the final "chase" scene, I wondered if it could have been prevented. Sadly, it may well have if the SBI had not withheld information, and their politics had not gotten in the way. What I found remarkable was the Kentucky State Police homicide detective's determination to get the whole truth and continue his investigation on Susie Lynch even after her death and when the easy way would be to just close the case. In sum, this is an engrossing book and I would highly recommend it.

Published by Thriftbooks.com User , 18 years ago
Bitter Blood is a compelling story of such monstrous proportions that we immediately recognize that only family could be guilty of such crimes. (Not our families, of course--those other families. The crazy ones.) Bledsoe has a unique gift for selecting the right details. His eye is true and his judgement sound in giving the reader just enough information to feel we have a three-dimensional understanding, but the narrative never stumbles under the weight of too much irrelevant material. This makes for a grotesquely intriguing story. We are horrified, shocked, disgusted, but under Bledsoe's careful guidance, we come to understand the real people and events that led to this nightmare. True crime fans will love it. Those of us who live in North Carolina shake our heads in recognition. A compelling read.

Published by Thriftbooks.com User , 22 years ago
I first read this book when it was released many years ago - checked it out at the library, read it, read it again, turned it in and went back for it. Starting with IN COLD BLOOD - I've read almost every book of this genre. With all modesty - this is the finest book of it's kind. The story of this family is just unbelievably tragic - that two members of a family could destroy so many fine people. Jerry Bledsoe sets up the history of the family, of the tobacco industry, and then dives into the sick minds of Susie and Fritz. You will never forget this.

Bledsoe at his best

Published by Thriftbooks.com User , 23 years ago
I was in N.C. when the climax of this book occurred (TV stations broke into programming to warn motorists/viewers to avoid certain streets because of the slow moving police chase.) Later, I worked in the newsroom of the Greensboro News & Record when Jerry's account of the murders was published. It captivated the entire piedmont triangle area for a week; no one could stop talking about it. In the newsroom, we knew for certain it would be published in book form long before the contracts were signed - it was that compelling. We kidded each other as to who would be cast in the movie - again, long before the ink had dried on Jerry's book contract. When the book was finally published, it was nothing short of a true crime masterpiece. This is the true crime book with which to judge all others. Jerry is a masterful writer, a spinner of tales, a good old boy in the finest southern sense. Buy the book. You won't regret it.

Published by Thriftbooks.com User , 25 years ago
This work is worth every minute of your time, if you like true crime. It is a fascinating study of the internal makings of a woman obsessed with herself. Shocking through the last page. The most captivating book of true crime I have ever read. Bledsoe is a fine writer.
Trustpilot
Copyright © 2022 Thriftbooks.com Terms of Use | Privacy Policy | Do Not Sell My Personal Information | Cookie Preferences | Accessibility Statement
ThriftBooks® and the ThriftBooks® logo are registered trademarks of Thrift Books Global, LLC