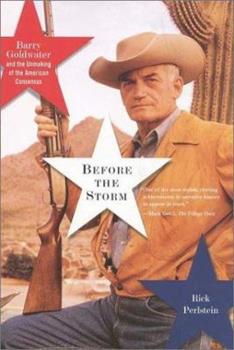 Before the Storm: Barry Goldwater and the Unmaking of the American Consensus

A bold and astute narrative history of conservatism's climb and one of the best-reviewed books of 2001. Rick Perlstein's Before the Storm tells the story of the rise of the conservative movement in the liberal 1960s -- a story that, until this book, had never been told. The figure at the heart of the story is, of course, Barry Goldwater, the handsome renegade Republican from Arizona who loathed the federal government, despised liberals on sight, and...

Political history at its BEST

Published by Thriftbooks.com User , 16 years ago
Quite simply, this is an amazing work. It starts as the book the cover would suggest it is: tightly focused, part Goldwater biography and part tale of the conservative movement's early days. By the end, however, the story is less Goldwater and the election and far more a sweeping survey of American life in the early 60s. The campaign fades away, Perlstein masterfully weaves in tales of the civil rights movement, demonstrations, and other events, and Johnson becomes as central to the close of the story as does his opponent. And this only adds to the impact of the book, since both aspects are written amazingly well. Following the Goldwater campaign with all its missteps is as agonizing as the wider diversions are educational. In the end, there is a complete and engaging portrait both of the election and the massive changes in American society that it portended (not to mention how different things are today: the chaos of Goldwater's campaign is utterly surreal in comparison to the machines of current elecitons). Perhaps most importantly, the book is amazingly even-handed. Perlstein's politics are obvious, but his observations come across as more therapeutic than enraged, almost seeming to sympathize with Goldwater as he tries to fight off the truly lunatic elements. It means that Before the Storm is a book that both conservatives and liberals can and should enjoy. Anyone seeking to understand why politics and society are what they are today should start here.

Published by Thriftbooks.com User , 17 years ago
This book is political history at its best-- absorbing, non-partisan, and blissfully free from shallow and anachronistic pontificating from the author. Despite what the other reviewers have said, it is not at all overlong-- it tries to capture the national mood of the times by straying from Goldwater himself, but this only strengthens the presentation of the '64 campaign. And, yes, the book does rely on an "assumed store of political knowledge," but what one reader calls "absence of any real or substantive analysis" is really just Perlman's decision to let the facts and the story speak for itself, like good history should, instead of resting on argument. Indeed, one of its great strengths is that it allows the reader to draw on his "assumed store of political knowledge." Finally, this book is completely non-partisan, and is an agreeable read for those of any ideology-- apparently not an easy task to pull off, as evidenced by the stacks of partisan histories that are perpetually being turned out. There is an extraordinary amount of bad popular history on the market, but this is a book of exceptional quality.

MUST Read Regardless of Your Political Persuasion

Published by Thriftbooks.com User , 20 years ago
Aficionados of U.S. political history, regardless of their political persuasion, will immensely enjoy Rick Perlstein account of the pivotal Presidential election of 1964. Given Johnson's lopsided majority -- the largest landslide to that point in U.S. history -- the 1964 contest would appear, on the surface, to be uninteresting. However, 1964 was pivotal not for who won, but who lost and why. Perlstein, an avowed Leftist himself, adroitly recounts the rise of the new Conservative movement, which flexed its political muscles for the first time with the nomination of Barry Goldwater. Ironically, as Perstein shows, pundit after pundit proclaimed the Conservative movement stillborn following Goldwater's pitiful 27-million vote total (compared with Johnson's 43 million). It would be, Perlstein points out, one of the greatest political misjudgments in U.S. history, as the next 30 years would attest."Before the Storm" has much to commend it. A few of the more interesting anecdotes include:* Clifton White's brilliant, secretive Draft Goldwater campaign and his tactical genius in out-flanking the Rockefeller/Scranton/Lodge partisans at the convention;* the internecine struggle for the soul of the young Conservative Movement between Welch's John Birch Society and Buckley's National Review;* the rise of the Young Americans for Freedom, which would dwarf its better known liberal counterpart, Students for a Democratic Society;* the role of Bill Moyers, the holier-than-thou PBS personality, in pioneering a new advertising genre: the political attack ad.* the dramatic political debut of Ronald Reagan, with his acclaimed "A Time for Choosing" speech -- broadcast nationally on election eve. I could go on and on. "Before the Storm" is neither a paean to, nor an attack on, the Conservative Movement. Rather, Perstein's account is thorough, well researched and even handed. A MUST read for political fans of all stripes.

The origins of the modern Right, as seen from the Left

Published by Thriftbooks.com User , 20 years ago
Why should you read this book? Lots of reasons. First, read BEFORE THE STORM for it's look at the origins of the modern political era. When the polls closed on Election Night '64, the Democrats had just won the Presidency for the seventh time in nine elections, and they held huge majorities in both houses of Congress. The experts debated whether the Republican party could survive, but all agreed that the Conservative movement was dead as vaudeville. Within two years, the Republicans came roaring back in Congress and the state capitols, and the Conservatives held veto power in the Party. The GOP won five of the next six Presidential elections, captured the Senate in the eighties and both houses of Congress in the nineties, and the only Republican presidential candidates to lose were two incumbents who had shown themselves as not conservative enough for the fire-eaters. Who ordered this? Perlstein shows how the charges that blew apart the consensus were laid. He follows the people who were determined to create a Conservative movement, and shows how they eventually succeeded in forcing their champion, Barry Goldwater, into running for the office he didn't want. BEFORE THE STORM also shows us how crazy politics can make people. It's jaw dropping to read of Clarence Manion's efforts to make Orville Faubus into the standard bearer of Constitutional govt. Faubus arguably should have been hanged for treason! And how many of knew that Barry Goldwater was either a totally incompetent politician, or he deliberately sabotaged his presidential effort? The story of Goldwater's '64 'campaign' is a near-perfect record of doing the wrong thing. Yet it didn't matter. Goldwater did the three things necessary to birth the modern Conservative movement: he ran, he allowed Clifton White to organize the volunteers who would take over the Republican party, and he introduced the politician who knew how to reach the people: Ronald Reagan. (My wife, hearing Reagan give "The Speech" for Goldwater, wished she could vote for Ronnie for President instead. Took a while, but ...) It's also illuminating to watch LBJ and his sanctimonious minions attempt to frighten the public into believing Goldwater was a madman who'd get us involved in a war, while secretly planning to do it themselves. How could so many, including me, be taken in by that fraud? Well, reading Perlstein, we're shown how easy it is to miss what's important. The public didn't know what Johnson would do, and the pundits had no idea a Conservative tidal wave would sweep away New Deal politics. Remember that the next time some television gas bag confidently predicts the future, or candidates assure you they'll never do 'X'. BEFORE THE STORM also reminds us of things we prefer to forget or deny, such as the way Goldwater and others abandoned principle to appeal to racists. As a Known Fascist, I hang my head in shame for what we compromised with.

Published by Thriftbooks.com User , 20 years ago
If you are a reader of culture and politics, I can guarantee that you have never read the story contained in this book. The history of the sixties has been packaged by the so called "victors" for 30 years. Rick Perlstein just broke up that monopoly. Somehow he tells the story of the birth of modern conservatism without attacking the ideology, or schilling for it either. We hear alot about "balance" these days, but here we actually have it. This is the way history should be written. Perlstein is a thirty year old guy, who obviously went beyond his textbooks while in school. He is one of the rare modern writers of politics and culture who treats the subject of American conservatism seriously by painstakingly recreating its march forward, led by Barry Goldwater. Goldwater's defeat in '64 was spectacular, but as Perlstein puts it, conservatives "sucked it up" and moved on. If you are a conservative you will love the detail of the book. If you are Liberal you may begin to understand how the conservative ideology was battle tested in '64 and how it later used that huge defeat as a source of strength in the eighties and nineties. Most of all if you want to know more about the truth of the sixties, read this book. Perlstein shows that alot more than just flower power happened during that complex decade.
Copyright © 2020 Thriftbooks.com Terms of Use | Privacy Policy | Do Not Sell My Personal Information | Accessibility Statement
ThriftBooks® and the ThriftBooks® logo are registered trademarks of Thrift Books Global, LLC