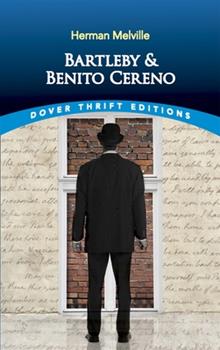 by Herman Melville and Herman Merville

Herman Melville towers among American writers not only for his powerful novels, but also for the stirring novellas and short stories that flowed from his pen. Two of the most admired of these -- "Bartleby" and "Benito Cereno" -- first appeared as magazine pieces and were then published in 1856 as part of a collection of short stories entitled The Piazza Tales. "Bartleby" (also known as "Bartleby the Scrivener") is an intriguing moral allegory set...

Published by Thriftbooks.com User , 4 years ago
I was at a event featuring Crispin Glover when I heard about this book. It is actually is a very underappreciated piece of literature. It starts off slow bit you really get a chance to know and appreciate the characters. There is a bit of Bartleby in all of us I think. Day to day we do things because we are obligated to do it even though we would prefer not too. How freeing would it be to do what Bartleby does in this book yet his freedom has a price.

The immortal ' I prefer not to '

Published by Thriftbooks.com User , 17 years ago
Bartleby is the story of one of the great ' naysayers' of Literature. But unlike Dostoevsky's ' Underground Man' he does not scream out his 'nay' in curses. His 'nay 'is quiet. " I prefer not to" . A much more romantic American adolescent naysayer Holden Caulfield will captivate readers also by saying to society, the world, the system of conventions that all are subject to, nay and nay again. The outcast, the loner, the naysayer is of course one great archetypal figure of world and most especially American Literature. Bartleby belongs among them. And the fact that neither he nor the narrator nor the author fully articulate the ' root of his nay' adds in a way to the mystery and mystique of the character. There is it seems to many of us something admirable in those who can turn away from the demands of ordinary society, and listen to the sound of their own drummer. But what is maddening and absurd in Bartleby is that he does not seem to do this for anything special. He gives no hint that this ' nay ' gives him personal satisfaction. His withdrawal seems impersonal .And it seems a reflection of his own feeling about himself which is ' nay' Or on another interpretation it might be said that his saying ' I prefer not to' is the only way in which he preserves a vestige in his own identity. Clearly there are many ways of reading this. But this is an exemplary tale, of course enriched by Melville's descriptions of the office world of the time, by his masterful language and humor. One of the great long - short stories, or if you will, short novels. A masterwork without question.

A profound and wise examination

Published by Thriftbooks.com User , 17 years ago
Bartleby is a man who simply prefers not to do anything. He is employed as a scrivener, but prefers not to do his job - indeed, he would rather stand in his office and look out the window than emerge from his quarters. Why he prefers to do nothing is as much a question to his employer as it is to the reader. But however much laziness aggravates the average person, one will quite instantly fall in love with Bartleby's character - or perhaps love him and hate him simultaneously. I found myself imagining reasons for his passiveness and creating events in his life in order to figure out why Bartleby prefers to do nothing. His character would be considered a flat character by the way Melville presents him, and yet I view him as a round character because I feel as though there was a conflict in his past which shaped him considerably. I am left to ponder over the one reason given by the narrator about Bartleby's demeanor, and I find that mystery most intriguing.I enjoyed this story immensely. I fell in love with the character of Bartleby, and though the tale has a depressed, sad sort of aura about it, I walked away from it with a tranquil, serene sort of feeling. I can't really explain it, but I can say this: I would recommend that you take an hour out of your day and read this story in its entirety, reading it mean so that you get the most out of it. Even if you prefer not to.

Seemingly simple story about the choices we make daily

Published by Thriftbooks.com User , 19 years ago
Herman Melville wrote this story in 1853, two years after Moby Dick had been published and his writing career was beginning to lose its luster. Subtitled, "A Story of Wall Street", it is a seemingly simple story about a lawyer who hires a gentleman named Bartleby as a scrivener in his office. This was way back in the days before photocopy machines and scriveners performed the necessary tasks of tediously hand copying documents over and over. Bartleby was good at the copying part of his job, but when asked to proofread aloud one day he simply replied, "I prefer not to." From that moment forward, he used the phrase "I prefer not to" for every task requested of him, eventually "preferring not to" do any work whatsoever. The lawyer, who is astounded by Bartleby's attitude, tells the story in the first person.The story is rich in language and yet spare in actual action. The reader is forced to think, and think seriously about the choices we make daily. Bartleby chose to rebel and become an anti-hero. But the real protagonist of the story is the lawyer, who is drawn into Bartleby's power and grows to admire him. The conclusion is sad, but inevitable. Recommended.

Published by Thriftbooks.com User , 19 years ago
I'm not very big into fiction; in fact, I dislike most of it. But, Bartleby the Scrivener is one of those rare works I actually enjoy to read and reread. There are many theories on what this short narrative is "about" ... from Bartleby being a representation of the pokings of the socially-numbed narrator's "Higher Self" to a portrait of the four humor personality types (Bartleby being the melancholic). Whatever it is, I know I can relate to it. Anyone who has ever felt unhappy, trapped, confined in a drudge of a job yet deeply in touch with themselves, their spirit and passions, or unwittingly conscious of "the game" (i.e., most of your idealists) will probably swoon at this well-written tale of an imprisoned free-spirit.

We are the hollow men, we are the stuffed men.