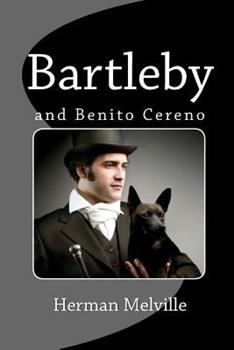 Two memorable and stirring works-first written as magazine pieces and later published in The Piazza Tales. "Bartleby," (also called "Bartleby the Scrivener") is a haunting moral allegory set in the business world of 19th-century New York. "Benito Cereno," a harrowing tale of slavery and revolt aboard a Spanish ship, is regarded by many as Melville's finest short story. While the tales of Bartleby and Benito Cereno are very different, they share something...

On the Hinge of Human Existence

Published by Thriftbooks.com User , 18 years ago
The story of Bartleby is an interesting one. It is a very thought provoking tale. As I read many reviews of this story I have seen a lot of discussion of the main character Bartleby, with good reason. But it is also interesting to look at our story's narrator... Bartleby's employer.From the outset he is a man intrigued by his employees. The story begins with his description of 3 employees: Turkey, Ginger Nut and Nippers. He has these 3 gentlemen as workers and seems genuinely interested in their apparent strengths and weaknesses... especially the weaknesses. Then enters Bartleby-- the stoic worker who respectfully uses his ringing statement of defiance, "I would prefer not to."It is fascinating to see the narrator deal with Bartleby and his passive resistance. I suppose he could have swiftly dismissed his insubordinate worker. And have ended his relationship with him quickly. But, this was not the course of action taken. He seemed to see a specific responsibility to Bartleby. He felt like he must provide some type of framework for Bartleby to exist in. Even when he discovers Bartleby living in the office, he continues to carefully support Bartleby. Why was this his approach? Our narrator seemed to sense an important role in helping his apparently marginalized worker.I especially enjoyed the narrator's thoughts on his supposedly predestined situation. Was it his divinely ordained responsibility to deal with Bartleby? Was he serving some great role in this man's survival and possible redemption? I believe that's why he stuck it out with Bartleby for so long.This short story is intriguing in that it should push us all to be more socially responsible. Even when the responsibility pushes us to be outside our comfort zone. In most of the instances in which the narrator felt like dealing with Bartleby harshly... he was prodded by peer pressure or driven by a fear of looking bad. Does it really matter how we look in the eyes of the world? Or does it matter more what we do, out of love for fellow man? It shouldn't matter if we look foolish or weak... especially if we are putting others first.Bartleby teaches me, that I have a strong responsibility to my fellow human beings. If I see someone outside the bounds of what we would call "normal society", what can I do to help them? How can I show them love and respect? It's too bad when someone decides to drop out like Bartleby... Life means too much for anyone to do that.Bartleby stood on the hinge of human existence and chose to swing out into the abyss. You may stand there one day, too. Which way will you swing?

Published by Thriftbooks.com User , 20 years ago
These two tales are very different, but both of them are deep and acute penetrations into the human psyche. The first one, "Benito Cereno" is about a mutiny on board of a ship. This ship is navigating astray, off the coast of Chile (which is NOT in Central America, as other reviewers have embarrasingly said), when Captain Delano, an American sailor, observes it. He gets near the suspicious ship, gets on board of it, and finds an extremely tense and enigmatic situation. Wonderfully, Melville chose to describe the situation only through the senses of Captain Delano. As the narrator is not omniscient, we only know what Delano knows, so we understand his confusion and amazement at the strange facts he observes. We share his vacilations, speculations and changes of opinion before the disconcerting behavior of Captain Benito Cereno. This makes the reader stay interested all through the story, like he was there being part of it. The unexpected ending will solve the mystery, but only partially. What's best about this story, even more than the smart plot, is the author's technique. He puts the reader right in the middle of the action. Just like in life, where we have no narrator telling us what the rest of the characters are doing "meanwhile". We only know what we learn from our senses, hopefully processed through reason.The second tale, "Bartleby the scrivener" follows a technique similar to that of "Benito Cereno", but within a very different context and plot. It's narrated in first person by a good-hearted and charitable Wall Street lawyer (I guess times have changed)who hires a young and silent man as a copyist (that is, before Xerox, the guy who made manual copies of legal documents). Bartleby sets to do his work, copying page after page, but he refuses to do anything else, with the words: "I would rather not" as an answer to every order, instruction or request to do something. Tenaciously, Bartleby resists to any action. It's a pathological portrait of indifference and apathy, taken to the extreme. As in "Benito Cereno", we receive no additional explanations or background to his behavior. We are exactly where Bartleby's boss is: confounded. We are invited to witness a unique form of behavior and attitude towards life. The naration jumps continuously from drama to humor, with great fluidity and fine irony. Haunting and intriguing, this is a masterpiece of storytelling.

Published by Thriftbooks.com User , 21 years ago
I must respectfully disagree with the Boston reader who asserts that Bartleby is "a case study in clinical depression." That's definitely one way to interpret the story, but it defuses a great deal of the tale's power. If we believe that Bartleby is simply a victim of mental illness, we might begin to believe that if only doctors had Prozac in the 19th Century, poor old Bartleby would have chippered up and gone home dancing.Bartleby's refusal, his famous "I prefer not to," seems more like a deliberate and sane NO. People did know what depression was back then (though it was generally called melancholia, instead). Bartleby's condition (our condition?) is something much deeper, much more terrifying-- the possibility that one can observe the world from a completely rational mind and decide that participation is not worth it.If we decide that Bartleby's problem was depression, must we call Kurtz a paranoid schizophrenic? All of Beckett's characters could use a Xanax prescription, because they seem pretty bleak, too. Bartleby is fascinating because of what we don't know; Melville is the great American exploiter of Negative Capability, Keats's term, defined as "when a man is capable of being in uncertainties, mysteries, doubts, without any irritable reaching after fact and reason."It is because Melville is willing to refrain from that "irritable reaching after fact and reason" that Bartleby (and Benito Cereno and Moby-Dick) is a story that lingers in the imagination. If we knew why the man simply quit the business of life, if we knew it was a deficiency of chemicals in his brain or whatever, we would not be so haunted by his fate.

Published by Thriftbooks.com User , 22 years ago
Bartleby is the story of a classic (though in those days undiagnosed, of course) case of what we now call "clinical depression." His symptoms--especially his utter passivity and his complete indifference to his own fate to the point of paralysis and eventual death from starvation--fit the textbook definition of the disorder down to the last detail. And of course, when the reader discovers at the very end of the story that Bartleby had lost his previous job, we have the final piece to the puzzle--the likely catalyst for his mental illness. Unfortunately, cases like this happen all the time in real life.This is a superbly well-written but very disturbing--even haunting--story that will send a shudder of recognition through anyone who has ever known a victim of this crippling psychological disorder.

A lawyer aids a scrivener who ends up in an asylum!

Published by Thriftbooks.com User , 23 years ago
Herman Melville spins a great tale that's easy to read. It's a story about five men, and the main character is just as much the narrator as it is Bartleby. The narrator is an attorney who hires three people to work for him, and each one is a real character. All the men are described in great detail, and they are terrific thumbnail character sketches that will stay in your memory bank for years to come! The last man employed is Bartleby, and he is really a strange duck! Bartleby is an excellent copier of legal documents, and initially he does a fine job. However, as the story progresses Barleby acts very strange. He responds with the words, "I'd prefer not to," when asked to proof-read manuscripts, and this response continues whenever the narrator, his boss, asks him perform the ususal office tasks such as going the the post office or doing small errands. The climax of the story comes when the narrator finds Bartleby in the law office getting dressed one Sunday morning. It appears that Bartleby is using the office for his lodging, and the narrator later comes across his personal belongings and shaving kit. As the story progresses, Bartleby does less and less work, and soon he's nothing more than a fixture in the law offices. When the narrator dismisses him and pays him a salary plus a tip, Bartlby refuses to leave. Finally, the narrator is about ready to go crazy -- the man won't leave. So, the narrator moves his law practice to another location and leaves Bartleby at the former work site. The end of the story describes Bartleby in the Tomb, and asylum. Rumor has it that Bartleby was once employed as a clerk in a Dead Letter Office, and this seems to explain his forlon state. Melville explains that a dead letter office is a terrible place to work; no doubt Bartleby was depressed being surrounded with letters that never made their intended destination. These letters could have contained money, promises, stories about weddings, happy tales written to people who failed to receive them. The symbolism in the story is interesting. Bartleby, like the narrator, live in a cold, impersonal world, set off by a series of walls and dark buildings. The symbol of walls without windows are the boundaries for the disconnected solitary work the five men face. Like hermits, each one rarely interacts with the other, and Melville shows the awful effects of a compartmentalized modern society. What would he think of Americans today who sit at computers and interact only by e-mail? What sad, solitary lives have we wrought? This story is rich with details, and I think you'll enjoy it!
Copyright © 2020 Thriftbooks.com Terms of Use | Privacy Policy | Do Not Sell My Personal Information | Accessibility Statement
ThriftBooks® and the ThriftBooks® logo are registered trademarks of Thrift Books Global, LLC