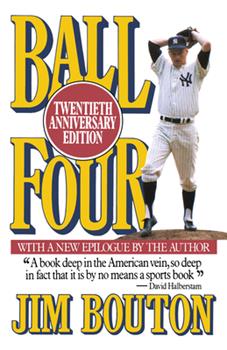 Twentieth-anniversary edition of a baseball classic, with a new epilogue by Jim Bouton. When first published in 1970, Ball Four stunned the sports world. The commissioner, executives, and players were shocked. Sportswriters called author Jim Bouton a traitor and ""social leper."" Baseball commissioner Bowie Kuhn tried to force him to declare the book untrue. Fans, however, loved the book. And serious critics called it an important social document...

the first to expose how players used the groupies

Published by Thriftbooks.com User , 14 years ago
Jim Bouton is a very bright man who probably could have been a scientist if he didn't go into baseball. In the 1960s when he played nobody wrote colorful exposes of the behind the scenes and road trip life of major league ball players. Bouton was the first with this book. It ended many friendships with teammates and probably broke up his marriage. The book might seem tame by todays standard. Alcohol was the players drug in those days and no one was shooting up steroids back then. But the book was racy, groundbreaking and controversial in its time much like Canseco's books are today. You will also see that it led to several other books by Jim Bouton and even one by his ex wife (another analogy to Canseco whose ex wife also wrote a book). Bouton was a great pitcher but alas for only the period from 1961-1964. 1963 was his best season but even though he pitched well in that world series the Yankees got steamrolled by the Dodger staff with Drysdale and Koufax leading the way. After retirementhe came back to pitch for the Seattle Pilots expansion team in their first year. He had developed a knuckle ball and that allowed him some limited success. Bulldog Jim wrote a book about that experience too. He had a trick when he pitched for the Yankees. He wouldd deliberately wear a very loose fitting cap that would usually fall off his head as he delivered the pitch. This was distracting for the hitters. But in his day Bouton had a good fastball and a deceptive changeup and he was part of a great pitching rotation in 1963 that included Ford, Downing and Terry.

A book that changed the sports book genre for the better

Published by Thriftbooks.com User , 15 years ago
Books about sports stars can be dated in two ways. BBF (Before Ball Four) and ABF (After Ball Four). Before this book came out, sports stars were mythologized in print and the books had a cardboard-style sameness to them. According to the BBF books baseball stars such as Mickey Mantle, Babe Ruth and Ted Williams did nothing but pull for their team and engage in some occasional boyish antics. In other words, heroes through and through. The reality was quite different, Babe Ruth was an incorrigible woman chaser, heavy drinker and was verbally cruel to people. There is the classic story of a group of baseball writers playing a game of cards on a train taking the Yankees on a road trip. A naked woman followed by an equally naked Ruth ran past them. One writer remarked, "It is a good thing I didn't see that because otherwise I would have to write about it." Mickey Mantle was a heavy drinker; he often played so heavily hung over that he had trouble keeping his eyes open. Williams was not a team player, he was at times an indifferent fielder and he refused to enlarge the strike zone by even an inch in order to drive in a run that would tie or win a game. There is a classic story that he once hit a home run that got his team back in the game. However, rather than accepting the accolades of his teammates, he sat in the dugout cussing himself for swinging at a pitch that was a ball. Bouton's book changed all that. He described the players as human, with all their faults. In the early sixties Bouton had one of the best fastballs in the game, his pitching helped propel the Yankees to the American league pennant and some argued that in 1964, he was the best pitcher in baseball. However, in 1965 he hurt his arm and could no longer throw the heat. In 1969, he made a semi-comeback throwing the knuckleball for the expansion Seattle Pilots. Even on a marginal team he was at best a marginal player. This book is a combination of his actions with the Pilots as well as a reflection of his time with the Yankees. Therefore, it is easy to detect a strain of bitterness at the loss of the glory days of the 1964 Yankees. Nevertheless, while many people have decried the book, no one has ever come forward to disprove his statements about the escapades of the players. Many drank heavily and took drugs, most were sexually promiscuous, and at times they were contemptuous of the fans. Since "Ball Four" came out, the books about sports stars have been more honest. This, in my opinion, is good for the fans, the games and even the players. The nation has become much more knowledgeable and realistic in how it views heroes. It would have been impossible to continue the artificial presentations of the people who so fascinate us when they play for pay.

A Groundbreaking, Entertaining, and Funny Book

Published by Thriftbooks.com User , 20 years ago
"Ball Four" is a diary that covers the year of a baseball player, in this case Jim Bouton, who spent the 1969 season with the expansion Seattle Pilots and then the Houston Astros. Entertaining on many levels, "Ball Four" also serves as a mirror of the times -- in the late 1960s, many established concepts and ideas, in politics, music, mass media, and sports, were being shattered. Baseball, always about five years behind the curve, was always thought of as a game that was played by wholesome, All-American men. They were our heroes. Ball Four, however, sheds new light and revealed, for the first time, that baseball players, even some of the game's superstars, are human. Bouton tells all, in, by today's standards, a tame fashion. We read about everything -- ballplayers cheating on their wives, playing with hangovers, racial problems between teammates, players taking uppers before a game, etc. Bouton is a very insightful writer and presents the material in a humorous manner, the humor, or barbs, is directed at his teammates, managers, coaches, and, in many instances, at himself. Baseball was outraged when the book first came out in 1970. Many players and baseball executives considered Bouton a turncoat. But the years have shown that Ball Four was a groundbreaking book, one that set the standard for tell-all books to come. These other books, however, have never reached the level of excellence of Bouton's "Ball Four."

best baseball book i ever read!

Published by Thriftbooks.com User , 21 years ago
this book is an account of jim bouton's 1969 season with the seattle pilots/houston astros. when i began reading it, i couldn't put it down! an insightful behind the scenes look often told with great humor.

Published by Thriftbooks.com User , 26 years ago
When my house cleaner threw my coverless, dogeared copy of Ball Four in the trash, I promptly fished it out. It's anyone's guess why a 41-year-old God-fearing female and lifelong Yankee fan would rank that book as a must-save, but I do. The book that "tore the cover off the biggest names in baseball" didn't make me think any less of my heroesÐit simply made all of them-Mantle, Maris, Tresh, et. al.-a little more human. Beyond that, it's a very funny book. The quality of "earthiness ... and non-sequitor" that Jim Bouton claims he's trying to capture is all there. The older I get, the more I read Ball Four not only as a book about baseball, but as a book about our times similar to (would'd have thought it) Samuel Pepys diary. Bouton freely discusses race, religion, and sex, but not to the point that the reader gets bored with any of them. Beyond everything else, it is a picture of Jim Bouton. It's all there, his insecurities, his faults, his self-serving attitude as well as his honesty, intelligence, and humor. I've heard very little about Bouton since 1970 when my brother and I read Ball Four and thought it necessary to keep it from our parents. But I feel as though I know Jim. And I feel nothing but kindness toward him.
Trustpilot
Copyright © 2022 Thriftbooks.com Terms of Use | Privacy Policy | Do Not Sell or Share My Personal Information | Accessibility Statement
ThriftBooks® and the ThriftBooks® logo are registered trademarks of Thrift Books Global, LLC