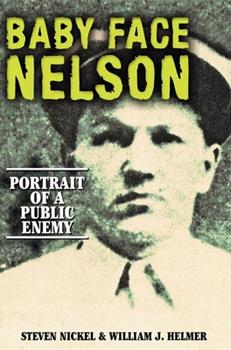 Lester Joseph Gillis -- better known to the public and press of the 1930s as Baby Face Nelson -- was one of a succession of public enemies beginning with John Dillinger and progressing to Bonnie and Clyde, Ma Barker, Machine Gun Kelly, and Pretty Boy Floyd. For decades their stories were largely myths, containing a combination of popular folklore and carefuly crafted FBI fables.In recent years historians have generated a more factual look at the life...

Published by Thriftbooks.com User , 19 years ago
This book is the best book about Baby Face Nelson, I enjoyed reading this book greatly. Everything you wanted to know about Lester Gillis is in this book. Every part of his life was explained in great detail; the authors did not leave anything out. I highly recommend this book to people who are into the depression era gangsters.

What A Way to Live

Published by Thriftbooks.com User , 20 years ago
The era of the depression desperado was a very short lived one, but the authors do a great job researching the life of Lester Gillis, aka Baby Face Nelson. Partners in crime such as John Dillinger, Homer Van Meter, Pretty Boy Floyd, and others are included in this book close to 400 pages long. Don't let the length keep you from reading it, because I believe you will find it hard to put down. I especially enjoyed the lengthy section devoted to the fiasco at the Little Bohemia lodge near Rhinelander, Wisconsin, in which federal agents staged a shootout with gangsters. Gillis (Nelson) was responsible for killing one of the agents while another agent killed an innocent person staying at the lodge he thought was a gangster. In any event, the bad guys escaped and lived to fight another day. The price these men paid for their violent lifestyle showed in the tension they constantly lived under as they covered their tracks to avoid detection from the law. At times they wistfully envied the simpler lifestyles of the common man who had an everyday job. I'm not that familiar with the suburbs north of Chicago, but I was confused when the author mentioned that Niles Center is now Wilmette in the picture section of the book, and then on page 361 Niles Center is referred to now as Skokie. Was Niles Center part of both suburbs? This is a well researched book and easy to read. Make sure you have a good amount of time when you sit down to read it, because you are not going to want to put it down. I highly recommend this book to you.

Published by Thriftbooks.com User , 20 years ago
The image of Baby Face Nelson has been only of a cold-blooded killer without any redeeming qualities. Nickel and Helmer gives us a picture of Nelson as a good family man who did not smoke or gamble, as well as a killer and bank robber. I highly recommend this well-written and easy to read book. I know it is extremely accurate because of my research on my Pretty Boy Floyd book and another book I am working on about the Dillinger gang. It is a long book that goes into great detail, but does not have any unnecessary padding. Much new inormation is given on criminals associated with Nelson such as Thomas Carroll and Homer Van Meter.

Published by Thriftbooks.com User , 20 years ago
This is well done, and does include much info not published before. Surprising that someone hadn't done this before 2002. I found a few small errors-typos-dates-addresses, but for a person interested in Baby Face and '30s crime this is a "must have".

The Real Baby Face: It's About Damn Time!

Published by Thriftbooks.com User , 20 years ago
The last few years of the 20th Century saw a wave of revisionist biographies of the so-called "Depression desperados," including Dillinger, Pretty Boy Floyd, Alvin Karpis, Machine Gun Kelly, and, especially, Bonnie and Clyde, resulting in a plethora of new information. But one major figure of the public enemy era has been overlooked until now, or at least relegated to a minor role as Dillinger's most notorious henchman. This is Baby Face Nelson, and Nickel and Helmer, using interviews with surviving witnesses and contemporary sources, including thousands of pages of FBI files, have at long last more than compensated for this. The old "mad dog" stereotype created by J. Edgar Hoover is at last shattered and Lester Gillis, from his birth in Chicago through his years as a teenage car thief and on to bootlegging, bank robbery and partnership with John Dillinger, whom he succeeded as Public Enemy Number One, emerges at last as a real, flesh and blood, three-dimensional person, rather than the cardboard stereotype of the past. He was a complex man, a devoted family man who cared for, and often carried with him on the fugitive trail, his wife, children, and mother, yet capable of unleashing incredible violence. He was a ruthless killer but, contrary to popular belief, never killed without reason and the list of his casualties is incredibly small compared to those of some contemporary criminals (Clyde Barrow and Pretty Boy Floyd, for example). Nelson committed only one of the seven murders attributed to the Dillinger gang but the victim was an FBI agent, thus singling out Baby Face as a special target of not only FBI bullets but J. Edgar Hoover's special wrath as well, and Hoover turned him into a gun wielding maniac. Newspapers noted Nelson's resemblance to Jimmy Cagney and transformed him into the caricature of a movie gangster. In contrast to this image, Lester Gillis, aka Baby Face Nelson, neither drank nor smoked, or even cheated on his wife, but preferred to spend his after hours time with his family, in itself an incredible story of domestic life on the run. Check it out. This is one fascinating bio, with lots of surprises.
Trustpilot
Copyright © 2022 Thriftbooks.com Terms of Use | Privacy Policy | Do Not Sell or Share My Personal Information | Accessibility Statement
ThriftBooks® and the ThriftBooks® logo are registered trademarks of Thrift Books Global, LLC