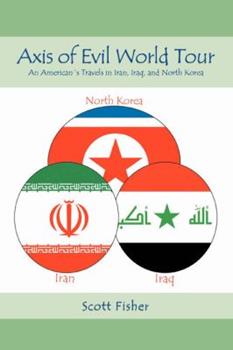 This description may be from another edition of this product. Axis of Evil World Tour goes beyond the superficial coverage found in much of the media to bring a boots-on-the-ground look at three of the most enigmatic, difficult-to-enter countries on the...

Published by Thriftbooks.com User , 14 years ago
Part PJ O'Rourke and part Paul Theroux, self-described writer, business owner, and professor Scott Fisher embarks upon what may be considered by many a fool's errand; travel to each of the so-called "Axis-of-Evil" countries: North Korea, Iraq, and Iran. -North Korea- The book begins with the author traveling deep into the heart of the Never Never Land of Kim Jong Il's North Korea. There he encounters fully brainwashed and sycophantic followers of the "Dear Leader." The government-run tour is the only way that foreigners may travel there and he describes the surreal experience with amusing insight and an alarming penchant for annoying the aforementioned sycophantic followers. His often heated and always honest exchanges with his guides and a few everyday Koreans demonstrate the truly insidious nature of the last true bastion of communism left in the world. -Iraq- From the government-run mishap of North Korea, the book moves to another one in Iraq. Mr. Fisher was sent to Iraq by the State Department, where he was employed as a China analyst (even though he has a graduate degree in Korean Studies). This seemingly ridiculous fact highlights the mismanagement he will come to describe in his book. Due to the increasing violence at the time, he was unable to see much of the daily life of Iraqis, but he details his battles with "by-the-book" Marine colonels and even on-base traffic police with scathing humor. Wherever he goes, he certainly has a way of irritating the powers that be, he but describes these encounters with such wit and charm that one comes away with the impression he'd be a great guy to sit down and have a beer with. -Iran- Although Iran neighbors Iraq, it took him thousands of miles, piles of red tape from the pentagon, and a long nervous wait for an Iranian travel visa to get to the final country to complete his axis trifecta. It is during this third section where Mr. Fisher's talents as a writer and observer really shine. This section of the book easily matches that of a travel-writing master such as Paul Theroux. Surprisingly, it was in Iran that he was most free to travel and meet with the people of the country he was visiting. Despite what today's news headlines say, Mr. Fisher describes a country of uber-friendly and welcoming people caught between the forces of conservatism and the forces of reform. He visits, of all things, a Jewish shrine, the tomb of Daniel (of the lion's den), the burial place of the late Ayatollah Khomeini, and travels within spitting distance of the suspected home of the country's nuclear program. Throughout his journey he is accompanied by the "Professor" his local guide who does his best to educate, enlighten, and protect the intrepid traveler. -Conclusion- He ends his book with this observation: "I was specifically looking for the kind of ties that could help bring together the three distinct parts of this narrative. After months of research and reflection it finally dawned o

Published by Thriftbooks.com User , 14 years ago
5 stars for Axis of Evil World Tour! This book is a great read with something for everyone. Whether you are a student, diplomat, traveler, in the military, business person, or cultural anthropologist, there is something for you in this book. This book may make you want to travel to these, off the beaten path, countries, or may make you think that those places are not for you. Either way, it will make you think. This book will make you consider as to whether you should pity the people who have to live under their governments rule, or hold them accountable for not doing enough to try and change their governments. We often hear in the news about the dire conditions that exist in these countries, but is what is said really the truth? This book will shed some light on that issue as it brings to light that perhaps the west is not right for trying to influence these countries, and governments, and that the people may really be happy living there. Or perhaps they are just too brainwashed to know the difference. Contrary to what the title suggests, this book is not a jab at George Bush, but does bring up an interesting point of view about the term "Axis of Evil". This book is so much more than a travel book or a travelers diary. Scott Fisher writes in a way tries to take you along on his trip. It is well done for a first book of this genre by a new writer. Not nearly as extreme as something by, say Michael Moore, Scott is not afraid to let his thoughts and political views be known, and this book contains enough sarcasm and cynicism to be a really fun read.

Published by Thriftbooks.com User , 14 years ago
I purchased this book on a whim, mostly because I was fasinated with what sort of bizarre place North Korea is like. I must say, Scott seems to give a fairly honest account of the people (what few he could talk to) live and what a total personality cult state North Korea is. I did wish for a little more detail about the little things in the country in general, but keep in mind he probably wasn't thinking of a book when he made that trip, so I'll cut him some slack. It certainly had enough detail to make for a good read. That being said, the section on Iran was also great, and the most detaile of all the three 'axis' countries. His experience mirrors what I hear from most westerners in Iran, that the people are pretty friendly and tend to seperate the US govt. from the average US citizen. Scott also manages to tell the story at face value (heck, I wasn't there so I don't know that for sure, but he gives that impression). Even the section on Iraq was decent, although the weakest of the three mainly because he didn't venture out into much of the war zone and into the real country. Can't say I blame him, but in a book that explores the countries of places the average US citizen can't get a handle on, it does contrast. That being said, it was ceratinly an amusing look into the cluster-youknowwhat that is the US buerrocracy in all its forms, be it military and civilian. Overall, I was impressed with the book and would recommend it. The North Korea and Iran sections are worth it alone to me, while the Iraq section is an amusing little extra, that does round out the 'axis.' The other refreshing thing about the book was that you didn't get any sort of over the top politicizing. Sure, there were instances where you could feel his political slant a little, but it was farily subtle and not preachy at all, which I find refreshing.

Published by Thriftbooks.com User , 14 years ago
Very well done. Scott's first hand experiences and engaging writing style make this book a pleasure to read. It's a MUST read for anyone concerned with the face of our "enemies."

Published by Thriftbooks.com User , 14 years ago
This is a great book. It tells the story of an individual who would not accept "No" for an answer. When government officials said "no", the author found ways go after what he wanted. It is a must read for those who dare.
Copyright © 2020 Thriftbooks.com Terms of Use | Privacy Policy | Do Not Sell My Personal Information | Accessibility Statement
ThriftBooks® and the ThriftBooks® logo are registered trademarks of Thrift Books Global, LLC