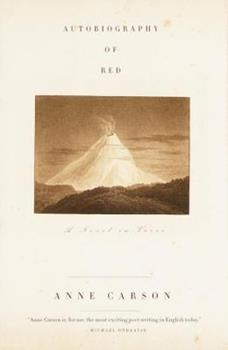 Autobiography of Red : A Novel in Verse

A New York Times Notable Book of the Year Finalist for the National Book Critics Circle Award Winner of the QSpell A.M. Klein Poetry Prize Award-winning poet Anne Carson joins the Vintage Canada list with this stunning work, both novel and poem, both unconventional re-creation of an ancient Greek myth and wholly original coming-of-age story set in the present. Geryon, a young boy who is also a winged red monster, reveals the volcanic terrain of his...

Published by Thriftbooks.com User , 19 years ago
This is one of the most interesting books I have read in a while. It moves beautifully between a mysterious, mythic presence to a heavy, all-to-human narrative. And this is to say nothing of its form! The economy of the writing is precise and exacting. The Verse was strangely magical, projecting me into the nebulous space beyond what Carson had written. I will certainly have to read this a few more times, because I think there is still much to be revealed even after one pass.

Published by Thriftbooks.com User , 19 years ago
"Autobiography of Red" is the story of Geryon, a young boy with red skin and large wings, who grows into a young man. He is in love with Herakles, a young man who seems to return Geryon's affection, but is actually quite cruel in his fickleness. The two encounter each other on and off over the years, Geryon seeking love, Herakles seeking adventure. Their paths eventually cross in Buenos Aires, of all places, where Herakles is with another young man, Ancash, recording the sounds of various volcanos. The three venture through South America together, the tension between the three of them almost palpable, at least to the more sensitive two of the group, Ancash and Geryon. It is here that the three must decide on the nature of their friendship, and Geryon on the nature of his life.This book is written in poetic free verse, and Ann Carson's style is nothing less than magical. It might seem difficult for readers accustomed to straightforward prose, but if one lets the words wash over them, their meaning will all be clear soon enough, and their beauty alone will convince the reader of their merit. The story is based on Greek myth, but rather than Herakles killing Geryon the monster literally, he "kills" by breaking his heart. Ultimately, the book's message seems to be that Geryon must learn to love himself first. The book is beautifully written, and cannot be recommended highly enough, to any reader who wants to read a delicate story in a challenging format.

Only If One Has Wings

Published by Thriftbooks.com User , 20 years ago
Classicist and poet, Anne Carson, has created a playful-but-tragic, present-tense, postmodern fable of obsessive love in her retelling of Stesichoros' "Geryoneis."For those unfamiliar with the classics, Stesichoros was a Sicilian Greek of the early classical era. Although little of his poetry has survived, we do know it was famous for both its extreme sweetness and its grandeur. In Carson's modern version of the Geryon myth, Herakles doesn't murder Geryon and steal his magic red cattle; he steals his heart instead. And in Carson's version, the theft of the heart may be quite a bit worse than outright murder, for, rather than dying outright, Geryon dies a little each day and his suffering is thus prolonged and made all the more difficult to endure.Since this is a present-tense, postmodern tale, Geryon doesn't, however, suffer in silence. He attempts, instead, as a young school boy (though still red and still winged--he presents his teacher with the myth of Geryon as his own autobiography), to create a new world and a new life for himself through his camera lens and through the redemptive qualities of his art. In this way, Geryon's demons are transformed through eroticism and become, if not something of beauty, then something that is, at least, worthwhile.Although this prose/poetry work is witty and playful, Carson's Geryon is still quite sad. Herakles is so definitely male and he loves Geryon in a stereotypically male manner, i.e., without really knowing the object of his love. Herakles seems out to have a good time and that is that. Although Geryon is red to his core, Herakles knows him so little that he even dreams of him in yellow. This upsets Geryon to the point of torment, who thinks, "Even in dreams he doesn't know me at all."One of the most interesting sections of this work occurs when Geryon, after some years, runs into Herakles (and his Peruvian lover, Ancash) in Buenos Aires. Herakles, Geryon and Ancash form a triangle that becomes a source of violence before it becomes a source of healing. Most interestingly, the village visited by this trio is a village of volcano-survivors who look upon Geryon and his red wings as godlike. But what I liked most about this section was Carson's amazing point and counterpoint. Her language is often profound, the language only the most poetic can write, yet in this section, especially, she juxtaposes that poeticism against the bizarre: a tango singer who just happens to be a psychoanalyst; a guerilla battle fought in the eye of a roast pig; and a surrealistic night flight over the peaks of the Andes with the passengers clutching toothbrushes and Herakles making love to Geryon under a blanket. Wow. Talk about creative.Carson pushes the medium of poetry beyond its conventional bounds and creates a profound meditation of loss, of rage, of sadness, of melancholy, of redemption...all seen through the camera lens of Geryon...and Eros. She filters love through photography, through sexual awakeni

A Most Original Read

Published by Thriftbooks.com User , 22 years ago
This book completely fascinated me. I can understand the frustration of some readers, for the book doesn't fit easily into any defined category of genre or style. But I was captivated by its commitment to the imagination, by its fresh play with the traditions of poetry and narrative. The poems which make up the "story" of Geryon are witty and wry; they are also stunning (literally) and deeply poignant. I've read many books in my life, but this one is truly brilliant...and unforgetable.

this book has gotten under my fingernails

Published by Thriftbooks.com User , 23 years ago
Anne Carson has created a mindscape. Her choice of style, dialogue (both Internal and Between), and language situate her characters on a mental landscape rather than a physical one. Even the frame of the story grounds the book in time as opposed to space. The book's construction and layout are beautiful. Carson's character Geryon holds such integrity that I now see little red wings on men and women everywhere. Read this book in one or two sittings for a completely overwhelming experience.
Trustpilot
Copyright © 2022 Thriftbooks.com Terms of Use | Privacy Policy | Do Not Sell or Share My Personal Information | Accessibility Statement
ThriftBooks® and the ThriftBooks® logo are registered trademarks of Thrift Books Global, LLC