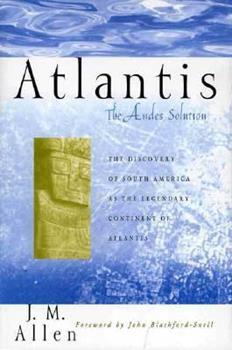 Atlantis: The Andes Solution : The Discovery of South America As the Legendary Continent of Atlantis

The ancient city and lost continent of Atlantis was devastated by floods and earthquakes in about 9600 BC according to the Greek philosopher Plato. He wrote of its magnificence and described its geographical location in great detail. Over the centuries countless theories have grown up regarding its precise location. This book describes fully the background to these theories and other lines of conjecture that this tremendous finding has opened up...

A great investigation and a solid conclusion based on available data

Published by Thriftbooks.com User , 14 years ago
This book was exceptional. I have been an Atlantis investigator for 45 years and this is the closest theory to where Atlantis actually was that I have ever read. Read this book and then do some follow up research on Timeas and Criteas and study more about South America, and it becomes obvious that Allen has the best theory on record about Atlantis. I have read many books on the subject since my original reading and this book still stands as the best theory available today. Many alternative theories are primarily propaganda campaigns to encourage tourism. This book is definitly not propaganda and is well supported with plent of data the suggests that the Jim's theory is correct.(5/20/2008)

The story is coming together

Published by Thriftbooks.com User , 14 years ago
Even if there is lack of scientific proof but only evidence supporting the theory, Allen's views are consistent with other scientific, historic and fictional theories on what happened about 12,000 years ago. If Allen's speculation is right, if also the Giza pyramids align with Orion's belt (built at about the same time), if Noah's ark is more than a myth (found in other mythologies - Greek and Persian too-), if Britain became separated from mainland Europe after a catastrophic flood at the same time, then maybe this evidence needs more investigation. Some strange theories sometimes become pure fact.

Published by Thriftbooks.com User , 18 years ago
Extremely interesting theory and evidence supporting it. This book is an excellent read giving a new, believable concept to the story of Atlantis. This book not only supports the facts and/or myths, it makes the whole concept of Atlantis more feasible in our search for historical truths. I definitely recommend this book to all with an interest in Atlantis and an interest in ancient civilizations.

Arm Chair Detractors are Full of It

Published by Thriftbooks.com User , 18 years ago
Considering the fact that I actually DO live in Bolivia, and I have been to some of the areas discussed in the book, I would like to say that Mr. Allen has done an excellent job surveying the area and analysing the region. I have been to Lake Titicaca many times, and I continue to explore not only Tiahanaco, but also the Salar de Uyuni, which isn't too far off from Mr. Allen's site. Here's what I have to say to the Arm Chair Wimps. A.) Get off your butts, and come down here, and see for yourself. B.) The Salar de Uyuni, which was once part of the great inland sea, has an island on it, known as Isla de Pescado. I did a survey of the island, and found not only the remnants of a coral reef, but also a lack of wind erosion. Anyone who's ever been out here knows that the high velocity winds carry sand and salt like scouring powder regularly. Yet there's this coral reef (which looks like a lot like Brain Coral) that is largely unscoured right in the middle of the Salar. I am currently documenting this on video to send for analysis. That would indicate that something shoved a tropical coral reef up 3-4000 meters above sea level, and did not permit enough time for the elements to wear it down. Coral rock is calcium based. It's not a hard rock. Yet I saw no wind erosion striations whatsoever. C.)Tihuanaco is so damn high, that no tree can grow on the plains for hundreds of miles around. Not to mention the quarry for the stones is several hundred kilometers away. And yet the TOP of the pyramid of Puma Punku has the largest stone, which according to some estimates, weighs 120 tons, but I want a real estimate with densities and dimensions. It looks more like 2-400 tons. We still don't have anything that can lift or move that kind of weight, regardless of the tonnage. And like I said, trees don't grow up here. D.) The Altiplano is NOT a desolate and forbidding place. The Campesinos regularly produce large quantities of food in the altiplano, from potatoes, to quinoa (which I eat tons of), to amarantho, etc. Most of Bolivia's population, by the way, lives on the altiplano, and due to limited transport, they get most of their food up here as well. So, Until you get your fat asses down here, it's all just a bunch of talk. Author of JACKFRUIT: A Bicycle Quest Through Latin America

The Andes Solution May Solve Half of the Mystery of Atlantis

Published by Thriftbooks.com User , 22 years ago
J. M. Allen correctly rejects Ignatius Donnelly's reading of Plato which placed Atlantis as "opposed to the Pillars of Heracles" rather than "across from the Straits" as related in Sir Desmond Lee's definitive translation. Thus Allen overcomes the common mistake that led scores of Donnelly's followers to posit Atlantis as a sunken island in the Atlantic (geologically unsustainable), rather than as an island-continent across the Atlantic (the Americas) whose civilization was destroyed but whose "bare-bones" still appear (Caribbean Islands). In choosing Bolivia as the site of Atlantis Allen has also chosen an ancient megalithic civilization of great antiquity built on the squared plain and canal system described by Plato. Tihuanacu very probably was a recipient or contemporary of Atlantean culture. The crucial problem with the "Andes Solution" is that the Altiplano of present-day Bolivia stands 12,000 feet above sea-level. Plato's Atlantis had a navigational base at its center that traded with sea-farers on a world-wide basis. Perhaps Allen is "half-right" in identifying So. America as the "island-continent," one as large as Asia and Libya combined. The Americas are in fact one continent -- a continent in antiquity because its reaches north and south could not fully be described, an island because it could be crossed easily from the Caribbean to the greater sea of the Pacific. And at the center of the Americas, a land that creatively connects the great ocean currents, there lie the most enigmatic relics of a great civilization, the almost perfect stone spheres of Costa Rica. For another argument on the nature and location of Atlantis read ATLANTIS IN AMERICA: NAVIGATORS OF THE ANCIENT WORLD by Ivar Zapp and George Erikson.
Trustpilot
Copyright © 2022 Thriftbooks.com Terms of Use | Privacy Policy | Do Not Sell My Personal Information | Accessibility Statement
ThriftBooks® and the ThriftBooks® logo are registered trademarks of Thrift Books Global, LLC