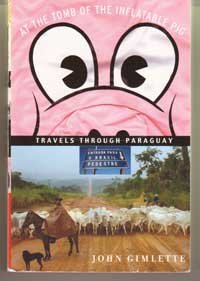 At the Tomb of the Inflatable Pig: Travels Through Paraguay

A wildly humorous account of the author's travels across ParaguaySouth America's darkly fabled, little-known "island surrounded by land." Rarely visited by tourists and barely touched by global... This description may be from another edition of this product.

Published by Thriftbooks.com User , 15 years ago
John Gimlette is a travel writer in the same league as Eric Newby and Grahame Greene. I went for five days to Asuncion a couple of years ago and I wish I had read the book before I went instead of after; the city would have made a lot more sense (if that were possible).

Published by Thriftbooks.com User , 18 years ago
An English barrister who happens to speak Spanish and harbors a fondness for Asunción is, it turns out, a wonderful thing. John Gimlette's Tomb of the Inflatable Pig is part travelogue, part history; he begins by reminiscing over his early sojourn in Asunción in 1982, during which he almost had an audience with the despised dictator General Alfredo Stroessner (a man who had degenerate lust for teenage girls, whose best known, 18-year old mistress was ironically nicknamed "Legal"), and then chronicles his recent return to this weird hinterland nation. After touring Asunción, a city native indian Guirani is the most-spoken language, but Anglophilia reigns as a national fetish (Princess Diana is mourned and revered), he ventures into Eastern Paraguay, home of many German settlers, including, reputedly, Martin Bormann. He treats us to the early history of Jesuit settlement and visits one of the old "reductions." He also describes the illicit smuggling that went on under Stroessner and made Paraguay the largest importer of Scotch in the world. At this point Gimlette interjects a fascinating slice of Paraguayan history - the tale of the disastrous General Lopez and his Irish mistress Eliza Lynch, who together plunged Paraguay into the disastrous war of 1865-70 with Brazil, Argentina and Uruguay. In particular, he journeys into the forests and finds Humaita, the fortress that, under the direction of a a brilliant Scots engineer, George Thompson, survived an Argentinian siege for many, many months, and even unearths Thompson's contemporary military of the campaign. He then visits the remnants of New Australia, an Australian colony formed as a socialist Utopia in the early twentieth century, and ventures into the dreaded Chaco, a desert where a brutal war against Bolivia was fought to a slatemate in the 1930s (Paraguayans call this a victory). Finally, he charts the recent history of Paraguayan politics, which seems to consist of assassinations, rigged elections, sexual degeneracy, periodic exiles of the local luminaries to Brazil and threats of renewed repression. A Simply a marvellous exposition of a nation that is truly weird, but marvellously so.

John Gimlette : At the tomb of the inflatable pig

Published by Thriftbooks.com User , 18 years ago
One of the most fascinating books on one of the most fascinatingcountries in South America.John Gimlette has tremendous knowledgeof his subject. He conveys his impressions as a traveller,he gives historical background and he is sarcastic and funny.This book is a pleasure to read, it is captivating. It might not be " politically correct" at times, but describinga brutal dictator who devastated his country in " politically correct" terms, I'd like to know what they are... Having been to Paraguay, it re-awakend an interest in that country again.I have adopted Paraguay as my special subject andpursue it with a passion. I stop short only on Guarani as a language, but even that language fascinates me. John Gimlette must be congratulated on this book, as an avid traveller and reader of travel books, this book is outstanding.It is almost a measure as to how travel books should be written,but then, we all have our special tastes and likes.

Published by Thriftbooks.com User , 18 years ago
I read this book in less then a weekend. As a first generation Paraguayan American, I learned more about Paraguay that weekend then in the last 27 years. My family is hooked; they have each ordered their own copy. I love the fact that he even included some Guarani words in the book, I did find plenty of misspellings though. Gimlette does great in sucking you in but his choice of words are a little biting. My only complaint is language, and since Gimlette has a problem biting his tongue, some may get the wrong impression about Paraguay. He should have tried harder to be a little more politically correct. You have to read this book with an open mind. We can recall history, but the storyteller can leave a lasting impression. I would like that impression to be positive. So on historical content, he gets an A+. But as far as I'm concerned, Gimlette needs to watch his words, they cut like a knife. His version of Paraguay is a little too over exaggerated. Oh, and PS, if anyone ever gets a chance to visit, GO!!!! Paraguay is beautiful!

The (almost) complete guide to Paraguay

Published by Thriftbooks.com User , 18 years ago
All in all, this is a very interesting book. I have learned more about my country's history from this book than I did in all my years in Paraguayan schools. It is a must read for all Paraguayans and everyone in general, why for everyone in general? Well, it has many historical facts about Americans, Germans, Australians, Italians, English, Indians, Jesuits, South Americans, the Nazis, etc. and their relationship to Paraguay. It has been wonderfully researched and is full of awesome facts and numbers. I can only recommend this book; it also has lots of old pictures and funny passages. The book is not perfect, it contains lots of misspelled Spanish and Guarani words and proper names, something that doesn't belong to any book. What I personally dislike the most is the fact that the author gave the book the weirdest title. I have never met anyone that has ever heard of those inflatable pigs, it was probably some kind of Pokemon/Tamaguchi wave that lasted for a few days, and he dedicated the book's title to it... What I also didn't like are some of his generalizations and comments about him being home sick or missing the UK when he couldn't find a real English Bar in Paraguay.
Trustpilot
Copyright © 2022 Thriftbooks.com Terms of Use | Privacy Policy | Do Not Sell or Share My Personal Information | Accessibility Statement
ThriftBooks® and the ThriftBooks® logo are registered trademarks of Thrift Books Global, LLC