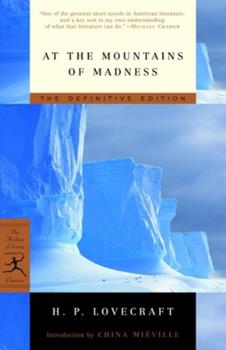 At the Mountains of Madness

by H.P. Lovecraft and Howard Phillips Lovecraft (in Danish)

Introduction by China Mi ville Long acknowledged as a master of nightmarish visions, H. P. Lovecraft established the genuineness and dignity of his own pioneering fiction in 1931 with his quintessential work of supernatural horror, At the Mountains of Madness. The deliberately told and increasingly chilling recollection of an Antarctic expedition's uncanny discoveries-and their encounter with untold menace in the ruins of a lost civilization-is a...

Published by Thriftbooks.com User , 11 years ago
"The Mountains of Madness" is a fine work of Lovecraft's Cthulhu Mythos. It is also his longest, being a novella rather than a short story. It does differ from his other Mythos work in that the alien Elder Things are humanized by revealing the logical reasons for what they do during the story, rather than portrayed in the totally unknown and unexplicable manner in which other such races are often depicted. In this way, it often reads more like a cautionary H.G. Wells story rather than a Cthulhu Mythos one. Because of this, however, as well as numerous, minor side references to other elements of the Mythos, "The Mountains of Madness" can be a good entry for those starting to read Lovecraft. The more understandable and accessible nature of the Elder Things makes the ideas in the story more easier to digest than the truly alien designs and workings of other entities in the Mythos. This particular book is well done in that it contains numerous related essays to fill it out, since "Mountains" is barely 100 pages long, making the cost of the book worth it.

Further into the Canon

Published by Thriftbooks.com User , 14 years ago
As some of the other reviews indicate, there's not much new here, beyond Melville's introduction, but the key words are "Modern Library" - along with the Penguin editions of Mr. Joshi's corrected texts and the startling admission of Lovecraft into the Library of America in 2005, this book puts HPL that much further into the canon of American literature and further from the generally cult status that's restricted interest in his work among other readers and critics. It seems a little odd that ML chose "Mountains" rather than "The Case of Charles Dexter Ward," which is arguably closer to a novel as most readers understand the term - more unified and complex in its narrative layout, with none of the tangential Mythos references one finds here. Let's hope they add "Ward" to their list, maybe in tandem with "The Dream Quest of Unknown Kadath," which certainly deserves more attention from readers of fantasy

Published by Thriftbooks.com User , 15 years ago
This was a very freaky and disturbing book. I think it is kind of cool how a lot of his stories tie in with the ancient book 'Necronomicon'. Many of the 'fictional' monsters in Lovecraft's works, such as the Cthulu, are monsters that the Necronomicon tells you how to 'supposedly!!' conjure up. It's also kinda cool how you can connect the covers of all his books to form a mural of disturbing sights. Greaaat book!

And 5 stars for Mieville's introduction

Published by Thriftbooks.com User , 15 years ago
One of the most amazing things I have ever read, made even more intriguing because I could not get it out of my mind that this book was written in 1936. It begins as a paleontological study set in Antarctica. Lovecraft writes almost as if this is a scientific documentary. It is convincing enough that within the first 20 pages I was researching what little was known about Antarctica in the 1930s and I was questioning what was known about paleontology at the time. The next 20 pages I was researching fictional citations of the Cthulhu Mythos and the Necronomicon. This book is ground breaking on so many levels. `At the Mountains of Madness' is nonstop fascinating discovery. Every single page is a thrill and every single page builds, like a documentary, knowledge of this alien world on a mostly unknown continent - at the time of the writing - on our very planet. This Modern Library Classics edition contains an introduction by China Mieville. I hope nobody tries to read the introduction before reading 'At the Mountains of Madness', but what a pairing is this story and Mielville's introduction. Mielville marvels at Lovecraft's art then takes Lovecraft, the man, apart. I love that these two pieces were put together. I closed the book at 1:30AM after reading the introduction and was sleepless for 2 hours despicably inspired. It is sickening and amazing to be human in all its variety. Beautiful.

Published by Thriftbooks.com User , 16 years ago
"The oldest and strongest emotion of mankind is fear, and the oldest and strongest kind of fear is fear of the unknown." - H. P. Lovecraft. _At the Mountains of Madness: The Definitive Edition_ republished by The Modern Library Classics contains three principle parts: a short introduction to H. P. Lovecraft and the story by China Mieville, the story "At the Mountains of Madness" by H. P. Lovecraft, and Lovecraft's essay "Supernatural Horror in Fiction". H. P. Lovecraft was an eccentric writer of weird fiction whose bizarre horror stories continue to both fascinate and repel. Lovecraft himself was a man of contradictions, an avowed materialist and atheist who wrote on superstition, the occult, and the supernatural, an aristocratic ultra-conservative who eventually embraced socialism, a racialist and elitist who found other races, miscegenation, and immigrants abhorrent, yet who married a Jew, and an ardent follower of the theories of Friedrich Nietzsche and Oswald Spengler regarding "the decline of the West". As China Mieville notes in his introduction, his tale "At the Mountains of Madness" reveals many of these elements. "At the Mountains of Madness" first published in 1931 is the tale of several scientific explorers who are visiting Antarctica. Lovecraft long harbored a fascination with this southernmost continent, and this tale reveals his scientific knowledge regarding geology, climatology, and paleontology. While exploring Antarctica, the scientists discover the remains of vaguely amphibious creatures which cause them to conjure up memories of various occult texts including the dread _Necronomicon_ and weird tales penned by authors such as Clark Ashton Smith, Lovecraft's good friend. The _Necronomicon_ by the mad Arab Abdul Alhazared is entirely an invention of Lovecraft's which first appeared in his tale "The Hound". The explorers also encounter the ruins of a lost civilization, where they find the remains of "the Old Ones". As China Mieville explains in his preface, Lovecraft reveals the influence of Spengler here, whose _Decline of the West_ showed how civilizations entered a stage of decline. While there, they also encounter certain monstrous penguin creatures and a slave race of shoggoths. Lovecraft who feared the rise of the masses regarded the shoggoths, a race of slave-like creatures of "the Old Ones" as the ultimate abomination. Lovecraft's paranoia of other races was particularly intense and led to his creation of stories of nihilistic cosmic horror. While many find this paranoia repulsive, few will disagree that it provides his stories with an edge that makes them unique in all of literature. This tale was obviously influenced by Edgar Allen Poe, who Lovecraft very much admired, whose _The Narrative of Arthur Gordon Pym_ also featured a mythicized southern pole and provided the maddening sound heard by the explorers "Tekeli-li". "Supernatural Horror in Literature" is Lovecraft's essay outlining the history of s
Copyright © 2020 Thriftbooks.com Terms of Use | Privacy Policy | Do Not Sell My Personal Information | Accessibility Statement
ThriftBooks® and the ThriftBooks® logo are registered trademarks of Thrift Books Global, LLC