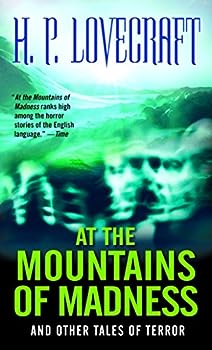 At the Mountains of Madness: And Other Tales of Terror

This description may be from another edition of this product. En la monta as de la locura is a classic story of an expedition of the Antarctic and the discovering of a cave that harbors secrets and horrors unknown to humanity.

Published by Thriftbooks.com User , 11 years ago
I have read some of these works(but not all) by Lovecraftc ollected in this edition before, but have always liked the look of these collections from Arkham. So i bought this one and was pleasantly surprised to find instead of the horrid dusk jacket i was expecteing, that i got a copy with the great artwok from Rayomd Bayless. Hope when time comes to order the others in the set that it will be the same. Awesome stories in an awesome package. 't go wrong with this.

Published by Thriftbooks.com User , 15 years ago
I will not try to write a complete review, since I see that there are already 17 reviews available here, several of fine quality. This edition is of great interest because it issues from Arkham House. Arkham House publishing was founded by August Derleth, a protege of H.P. Lovecraft who himself wrote a rather large volume of pastiche material using the Cthulhu mythos of Lovecraft. One motive of Derleth's in founding Arkham House publishing was to find a medium to reissue all the writings of Lovecraft, since many were confined to the pulps like Weird Tales that had first printed them. I recently purchased this book. The quality of the book is excellent. The print is clear and easy to read. The bookbinding quality is just excellent. This may explain why the book is not particularly cheap. As for the contents, readers may be glad to know that this book contains much of the very finest writing Lovecraft produced. The short novels were written following Lovecraft's return from his years living in New York, and follow the breakup of his marriage. This "period" of about a decade marked the finest of Lovecraft's writings. In my opinion -- arguably -- "At the Mountains of Madness" and "The Case of Charles Dexter Ward" are the best works in the Lovecraft canon. A few other words might come up to them, but nothing's better. Those who find Lovecraft interesting should also check out the writings of August Derleth that incorporate Lovecraft's "Cthulhu mythos." There is also a board game entitled "Arkham Horror" which attempts to recreate the scary Lovecraft universe on your card table. Whacky as this sounds, the game is fun to play. So have at it! Scare yourselves silly! I love this sort of material myself.

The best introduction to Lovecraft and the Mythos

Published by Thriftbooks.com User , 18 years ago
I recommend this as the best one-volume introduction to the works of H.P. Lovecraft. If you finish this single volume you will be familiar with the atmosphere and the terminology of a large part of the Cthulhu Mythos. That's probably why this particular edition has remained in print so long. After _The Dunwich Horror_, it was my introduction to Lovecraft. In the first story, "At the Mountains of Madness", you find yourself immediately immersed in the world of the Necronomicon, Miskantonic University, and the cosmic pantheon of the Cthulhu Cult and the Elder Things.The second tale, "The Shunned House", shows what the master could do with a more conventional horror story. It is one of the best stories of a cursed house and family ever written.The third story, "Dreams in the Witch House", serves as an excellent introduction to the cursed city of Arkham, though there are also strong elements of Miskantonic, the Necronomicon, and the speculations of fourth dimensional connections between our own world and "the farthest stars of the transgalactic gulfs."Finally, there is "The Statement of Randolph Carter", which may be the most perfect short horror story ever written.Of course if you are really hooked and want all the details about Lovecraft's world, then get the _Encyclopedia Cthulhiana_, that is if you are lucky enough to find a copy....

Published by Thriftbooks.com User , 19 years ago
"...ever hear tell of a shoggoth?..."When I first read these words in "The Shadow Over Innsmouth," my reaction was: Huh? I've been trying to find out what a shoggoth is ever since, and why they inspire such terror. "At the Mountains of Madness" reveals everything about these creatures, as well as unveiling a rather unusual chapter of the Earth's history.Sure, Lovecraft was good at gut-wrenching terror, but I like him best when he writes about fantastical, otherwordly encounters. That's why "Mountains" is one of my favorites, along with "The Shadow out of Time." Written back when Antarctica was still largely unexplored, the story chronicles the adventures of a research team from Miskatonic University in Arkham, and their discovery of a deserted alien city millions of years old. Seems Humans aren't the only ones to populate Earth....but what if the former inhabitants aren't entirely gone?Great story, truly. The shoggoths are certainly worthy of insanity -- don't read this while eating Jell-O.As for the other three stories in this book..."The Shunned House" was pretty good, but not great. It's a stand-alone story -- no "Iä"s here. "The Dreams in the Witch-House" was quite good; nice and creepy. It even had a reference to "Mountains." Slick. "The Statement of Randolph Carter" is really short and doesn't explain itself at all. Maybe "The Dream-Quest of Unknown Kadath," which features Randolph Carter, has more info...I should read that next.I think this book is worth the price, even though it's cheaply printed. As a hopeless Lovecraft fan, I'm glad to have learned more about the Cthulhu Mythos -- which, by the way, are at least as twisted and intricate as the X-Files conspiracy. Ah, insane genius! Heh, heh, heh....

One of Lovecraft's best volumes - hard to find!

Published by Thriftbooks.com User , 24 years ago
It's not fair to call Lovecraft a horror writer, as from his pen have come some of the most beautiful pieces of literature ever. Tales of the macabre, the ancient, the unspeakable. His narrative style draws you in immediately, engulfing you with the rich atmosphere of the Cthulhu Mythos. Some of Lovecraft's best works are collected in this volume - The Case of Charles Dexter Ward, The Dream-Quest of Unknown Kaddath, The Shunned House, as well as numerous short stories. Whether you're a nouveau fan or an old aquaintance, pick this book up
Copyright © 2020 Thriftbooks.com Terms of Use | Privacy Policy | Do Not Sell My Personal Information | Accessibility Statement
ThriftBooks® and the ThriftBooks® logo are registered trademarks of Thrift Books Global, LLC