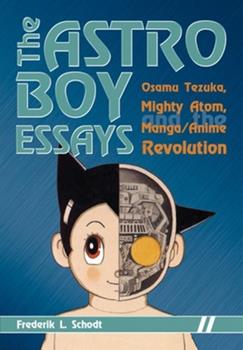 The pioneering genius of Japan's "God of Comics," Osamu Tezuka (1928-89), is examined through his life's masterwork: Tetsuwan Atomu, also known as Mighty Atom or Astro Boy , a comic series featuring a cute little android who yearns to be more human. The history of Tetsuwan Atomu and Tezuka's role in it is a road map to understanding the development of new media in Japan and the United States. Topics include Tezuka's life, the art of animation, the...

Say Hello to the God of Manga! (Manga no Kami-sama ni Yoroshiku!)

Published by Thriftbooks.com User , 14 years ago
You will not believe me when I try to tell you about Osamu Tezuka. He drew over 150,000 pages of manga in his lifetime, more than 700 separate series, and more than 70 anime, films and movies. He was a pioneer every genre, from hard sci-fi to mahou shoujo to adult films. He developed the drawing and animation techniques that still dominate the industry today. Today's greats, from Rintaro to Yoshiyuki Tomino, worked and studied with him. He was a political activist, writing against war, racism, environmental exploitation, medical corruption. He was a national hero of Japan, and under consideration for the Nobel Prize in literature when he passed away in 1989. Astro Boy, Black Jack, Kimba the White Lion, Metropolis, Phoenix, Buddha and Princess Knight are only the best known of literally hundreds of creations which have impacted every corner of the manga world. If you think this sounds like too much for one man to plausibly accomplish in a lifetime, you're far from the only one who finds Osamu Tezuka a little superhuman. Fred Schodt, author of Dreamland Japan Manga! Manga!: the World of Japanese Comics and translator of Phoenix, Astro Boy and more, was a personal friend of the "God of Comics" and his translator when Tezuka visited America. In his long-awaited Astro Boy Essays, Schodt gives a concise and detailed introduction to the life, influence and significance of Tezuka in the history of Japan and the international comics world. Focusing on Tezuka's best known work, the anti-racist children's classic Astro Boy, it gives efficient, approachable portraits of Osamu Tezuka's life and personality, the atmosphere in Japan during and after WWII and their effect on the manga industry, the nightmarish behind-the-scenes production schedule that birthed Japan's first animated TV series, and the spread of Astro Boy as a Japanese, and later an international symbol of peace, technology, hope for the future, and above all of Japan itself. The rocky history of Astro Boy's American distribution gives a fascinating look at the beginnings of American anime fandom, and how many barriers had to be broken to achieve the comparatively-smooth licensing and distribution system in place today. All the material is presented in a format beginners can understand, but with enough details that even experts will find themselves learning more with every page. The Astro Boy Essays is an invaluable contribution to manga scholarship, and provides a window for American otaku to finally learn about the "God" who made anime what it is today. For more information about the book, see: www.stonebridge.com/AstroBoy/AstroBoy.html For more information about Osamu Tezuka, his life and works, see: TezukaInEnglish.com

A book every anime/manga fan needs to read

Published by Thriftbooks.com User , 14 years ago
I just happened upon this book when I was shopping for manga and thought it looked like a good read. Well, it's a great read! Finally a book in English about Tezuka! Schodt does an amazing job breaking down Mighty Atom/Astro Boy along with Tezuka. He actually knew Tezuka so he brings a great insight to this work. The images in the book are great as well, especially the color inserts at the beginning of the book. Included are a great index of all the manga and anime episodes, and a character guide with both Japanese and English character names. If you are a fan of anime, manga, or both, you will want to read this book to know why the two art forms are so popular today, not only in Japan, but all across the world!

Published by Thriftbooks.com User , 14 years ago
I don't think the onslaught of Japanese pop culture would not take fruition if not for the talented work of Osamu Tezuka. He influenced his country men for many generations and his manga books are still published today and are fresh as they were printed over 60 years. The man has left a mark on more artists/animators than Walt Disney ever did. Frederik L. Schodt delves into the framework of this genius who set the blueprint to all manga and anime that we are used to. If not for Osamu Tezuka, I think Japanese manga and anime would be dormant, as with the Beatles a slew of bands followed them, but there was only one Beatles and they will always be standing tall in their heap in the part pop culture as will Osamu Tezuka will be for the Japanese culture, his name is under every breath of new creation that comes from that part of the world and has crossed oceans with his universal ideas and will leave a giant imprint for many more years yet to come. Astro Boy Collection Box Set
Trustpilot
Copyright © 2022 Thriftbooks.com Terms of Use | Privacy Policy | Do Not Sell My Personal Information | Accessibility Statement
ThriftBooks® and the ThriftBooks® logo are registered trademarks of Thrift Books Global, LLC