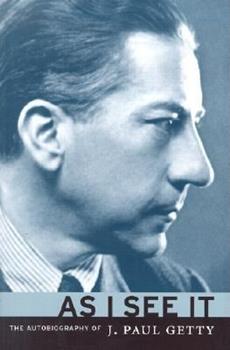 As I See It: The Autobiography of J. Paul Getty

While writing his autobiography, Jean Paul Getty - then perhaps the world's richest man - hoped it would be the final verdict on himself, on his many friends and associates, and on his times. Regrettably, it proved to be so: Getty died in 1976 as As I See It was going to press.

Published by Thriftbooks.com User , 13 years ago
"You cannot bring about prosperity by discouraging thrift. You cannot help the wage earner by pulling down the wage-payer. You cannot further the Brotherhood of Man by encouraging class hatred. You cannot help the poor by destroying the rich. You cannot keep out of trouble by spending more than you earn. You cannot build character and courage by taking away a man's initiative. You cannot help men permanently by doing for them what they could and should do for themselves." Abraham Lincoln Mr. Getty begins and ends his book with this quote. He discusses his political ideas, his personal life starting from his childhood, as well as, focusing on the current events of the day. I enjoyed learning about Jackie Kennedy, Aristotle Onassis, the Rockefellers, and other famous people in his day. His parents were very involved and attentive. They helped him develop into a mature and successful adult. Their stable relationship created a nice environment for their only child, Paul. Unfortunately, Mr. Getty was unable to create an environment like this for his five sons. His short term marriages, created turmoil for his children. Mr. Getty felt like a failure in all five of his marriages. He inherited the oil business from his father. But because of his hard work and his intelligence, he built an empire. I enjoyed reading his ideas on women and men. He explains the differences between the sexes in the work place as well in relationships. He obviously learned a lot about women from his marriages. Mr. Getty explains why he looks friendless and very grim in his media photos. He explains why he installed a pay phone in his mansion. He actually was not a loner, or a miser, as the press incorrectly states. It would stand to reason that he wasn't friendless. As generally speaking: "The poor are shunned even by their neighbors, but the rich have many friends." It is ironic that he is considered cheap as he built two world class museums in Los Angeles. His admitted addiction to buying art created a need for the two museums, which he built with his own funds.He purchased the art for his museums as well. One museum was built before his death, the other was funded from a trust fund. Today his museums receive endowments from the Getty Trust to maintain them, as well as, to purchase more art. I would have liked to know Mr. Getty. He would have been wonderful to converse with as he had a wide variety of interests, and he wasn't hesitant to state his opinions. Paul J. Getty's wealth is not what makes this book interesting. His clever insights and his intellect are what make this book well worth reading. Throughout the book I noticed his keen mind and his sense of humor. I appreciated the index, which made his book more of a pleasure to read, as I was able to easily reread subjects that were of particular interest to me. Although I am a fast reader the details in this book lends itself to be read slowly. You will enjoy this book.

As he saw it

Published by Thriftbooks.com User , 15 years ago
I felt kind of lame after reading this book, Getty really lived a full life. Reading the book, you feel like you're having a conversation with him about his life and what's on his mind. He seems very down to earth. This isn't necessarily a quick read business how-to book though you learn a lot by reading it. You get his life story that includes details on his family, friends, business associates, charity work and art. You also get interesting stories about the famous people he knew, eg his friend the Duke of Windsor that met with Hitler trying to avert WWII. Also there are chapters lovingly discussing his parents, children, and even his 5 ex-wives. He also defends his reputation for being cheap, eg payphone in his mansion. You really get inside his head by reading this book. My favorite chapter is his random thoughts chapter he wrote on Thanksgiving day, less than a year before he died 1976.

Published by Thriftbooks.com User , 16 years ago
This is Getty's autobiography, written in the 1970's not long before he died. One of the founders of Apple Computer advised me to read this book years ago, and so I did. I've studied many books on finance and business, but this was the first time I had read an account of a billionaire's life (and as I would later discover, the world's richest man). Getty wrote this book to give the public a glimpse into his very private life; seemingly knowing he was about to die, that he did not desire to die such a secretive/reclussive man. Inside this book, you'll read about how he developed a strong work ethic at a young age -- working hard-labor in the oil fields that he would later own; sneaking out his parents car in the middle of the night to take girls out on dates (hah!); accumulating wealth and looking out for employees; laying everything on the line for great opportunities; the tragedy of his grandson's kidnapping; and a very nice retort for all those people who called him a stingy old man -- that all of his wealth/money was invested in his business. Oh yeah, and you read about how he hung out with Hugh Heffner back in the day. His original books were published by Playboy Press, including my copy of his autobiography (an original 70's hardcopy). :-) Yeah, Getty lived the life I would like to be living now -- 'cept for all the divorces; poor guy just couldn't keep a lady around and it's depressing to read sometimes. And in a way, reading this book gives me inspiration for staying on track, aiming your sights on what's important in life and not letting go. Getty had a fun life and he was handsomely rewarded for it. Since reading Getty, I've seen the same drive in all the other Billionaires whose autobiographies I've read -- Branson, Dell, Schultz. And also Ray Kroc (although technically I don't think his stock was yet worth $1B when he died). You will love reading this account of Getty's life if your aim is to: have fun in life, be wealthy, learn from others, have a personal mentor from the grave, accomplish great things, and read autobiographies. Getty, thanks for sharing =)
Copyright © 2022 Thriftbooks.com Terms of Use | Privacy Policy | Do Not Sell My Personal Information | Accessibility Statement
ThriftBooks® and the ThriftBooks® logo are registered trademarks of Thrift Books Global, LLC