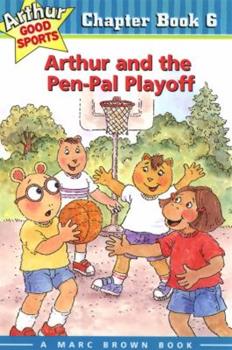 Marc Brown's new chapter book series features Arthur and his friends for sports fans ready to read on their own.Each book features a longer, sports-related Arthur Adventure, which has been vetted by a reading specialist and has loads of kid appeal. Arthur is in top form as he tries to help Buster goaltend like his hockey hero and plays basketball with a new pen pal.Arthur fans will want to read and collectall of these new chapter books!

Published by Thriftbooks.com User , 16 years ago
My child loved this book. Unlike the other Arthur chapter books, the books from the "Good Sports" series have not been shown on "Arthur" on tv.

Arthur And The Pen-Pal Playoff

Published by Thriftbooks.com User , 19 years ago
I read Arthur And The Pen-Pal Playoff. I think this book is great. I think little boys and girls will want to read this wonderful book. This book is great for nine year olds to read.Little kids will want to read this book over and over again, it's an adventure. This is a way to keep young ones away from the TV. I do recommend this book.

Arthur Could Be Any Kid

Published by Thriftbooks.com User , 20 years ago
When Arthur talks up his basketball skills in a letter to a pen-pal that he was assigned to write for class, he feels that he's in over his head. His pen-pal writes back that he's a great basketball player as well and then he learns that his pen-pal is the lunch-lady's grandson. Next thing he knows, Mrs. McGrady (the lunch-lady) arranges them to play a one-on-one basketball game. The thing that's great about this story is that it's a situation that many readers can identify with. Eventually, Arthur's forced to face his situation head-on, but he's not the only one...This is the last book of the "Arthur Good Sports" series. Whether any more books will be published in this series is not yet known, but the six-year 2001 set make a great addition to the "Arthur" series.
Trustpilot
Copyright © 2022 Thriftbooks.com Terms of Use | Privacy Policy | Do Not Sell My Personal Information | Accessibility Statement
ThriftBooks® and the ThriftBooks® logo are registered trademarks of Thrift Books Global, LLC