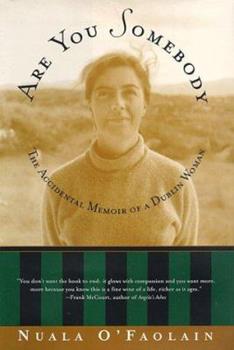 Are You Somebody?: The Accidental Memoir of a Dublin Woman

Are You Somebody is a moving and fascinating portrait of both Ireland and one of its most popular and respected commentators. This gem of honesty and insight had its first life as the introduction to a collection of Nuala O'Faolain's Irish Times columns that became a number-one bestseller in Ireland. It now stands alone. Ireland has fallen in love with this memoir of an Irish woman of letters, and now this country will too.

sad and so very true

Published by Thriftbooks.com User , 18 years ago
I have once again made the mistake of reading the other customer reviews before writing my own review. Generally when I happen onto a one or two star review that really comes down on a book that I like, I will go to the "See All Reviews" page and order the reviews from "Lowest First". I will then read through review after review by readers who simply wanted this to be another book rather than the one it is.I suppose that my repeated exercise of this masochistic procedure is part of my own Catholic background, which was far less complete, administered twenty years after O'Faolain's and in the New World rather than isolated, entrenched Ireland. Perhaps it helps to be Catholic when it comes to understanding Nuala O'Faolain's nearly continual struggle to lead a full and worldly life and not feel badly about it. A lot of readers still seem to expect a 'Whig history' from a memoir with triumph leading to triumph, interspersed with set-pieces of 'struggle' to make it interesting. Are You Somebody? is something much braver, truer and scarier: an honest recollection. O'Faolain very clearly describes the historically maintained cultural institutions that caused her to have certain beliefs and take certain actions that led her repeatedly into disaster. Forty years before her, Virginia Woolf had described the need for women to make lives that were expressions of their own desires rather than fulfillments of the needs of men. O'Faolain is acutely conscious, looking back in middle age, that she had not internalized Woolf's wisdom and that her dysfunctional relationships with men were a direct result.She is also at pains to describe the slow awakening of her consciousness of her Irishness and she is quite frank about how her failure to think of herself as Irish, even though the BBC thought of her as an Irish woman, caused to make mediocre documentaries about contemporary events in Ireland.In chapter after chapter O'Faolain shows us how hidebound patriarchy made it difficult for a woman to enjoy or trust worldly success, how the medieval nature of Irish Catholicism made for complete confusion about sex and female independence, and how a deep-seated disinterest in Irish culture among the educated classes of Dublin made one's identity peculiarly rootless. As if that weren't enough, there is much more in this book.If you find this book pretentious and depressing, then I suggest that you stop going to Starbucks and paying $3 for a cup of coffee. Life has not always been the way it is now. A lot of things were harder for women, particularly Irish women, not so long ago. If you don't want to hear it, then you're part of the problem.

Published by Thriftbooks.com User , 21 years ago
Nuala O'Faolain's father was a genial gossip columnist and man-about-town, and her brilliant mother was a voracious reader--but Nuala's youngest sister often went to school without food or underwear. O'Faolain's autobiography, first conceived of as a brief (!) introduction to her essays, manages to take on the changing face of Ireland AND women's roles in this century...while telling wonderful tales at the same time. Nuala's lifelong search for a home, a husband, a vocation, found her, in her fifties, childless, living in a tiny cottage with a woman, writing feisty opinions for the Irish Times. O'Faolain's rambling, episodic style is slowly revealed as a way of understanding the tragic contradictions of her past, and the hopeful possibilities of her future. Heartbreaking, funny, self-revealing...and a living example of what Adrienne Rich once wrote: "What does not change is the will to change."

Published by Thriftbooks.com User , 22 years ago
You either love this book or find it a tedious whine. Why would a conventional, middle-aged English teacher like myself find it worthwhile, even riveting? It helps that I have visited Ireland several times in recent years, and have gradually seen beyond the Irish Tourist Board conception of the emerald isle. And I have enjoyed Dublin, despite its scruffy character. I also have spent most of my professional life working with single women, and though none of them have faced life situations as tough as Nuala's, I still found connections with her life and their's. I also teach English, and I love her affection for poetry and books. But most of all, I love her truth-seeking, and despite some of the personal complaints on this list of reviews, this is a crafted book that never left me confused. We all have parents, and conflict between us seems to be just a part of living we can't altogether avoid. I thank Nuala for bravely writing her memoir. I read it straight through in two chunks of time over two days.

An uncomfortable but rewarding read.

Published by Thriftbooks.com User , 22 years ago
Reading this book at twenty-five made me feel as if an older woman finally told me the truth about life. Why then, I wonder, does nobody seem to like this book, when I consider it among the best I have ever read? Because both these books share that extreme amount of sadness that seems to belong only to the Irish, some might lump them together, but while in McCourt's work his eventual emmigration proves a happy ending to his trials, the sadness in O'Faolain's work doesn't seem to end. This is precisely what makes it a beautiful book. Readers who love the maddeningly innocent perspective of the young McCourt in his biographic Angela's Ashes may find O'Faolain's adult account of her young life cold in comparison. Hers, though, is not simply the story of a difficult upbringing, but of a life made up of difficult decisions made or avoided, and their consequences.

A particularly Irish life, but not just for the Irish

Published by Thriftbooks.com User , 23 years ago
I found this book intensely moving -- but not for the reasons I thought I would. It's everything the reviews say: a brutally honest picture of the author's chaotic and emotionally starved childhood, a memoir of literary Dublin in the 60's, a melancholy tale of her search for a lasting love, and a chronicle of her journalism career, and on that level it's a fascinating (and beautifully written) story for anyone.But I'm only about 5 years younger than Ms. O'Faolain. I was raised in a (partly Irish) Catholic family, went to Catholic schools all the way from kindergarten through college, then went to graduate school at Berkeley in the late '60's. Time after time, her observations chimed with my own: the cruelty masquerading as love (or maybe it's the other way round) in Catholic schools; how living in an intensely Catholic environment blinds you to any other viewpoint; how matter-of-factly women were consigned to invisibility in our era, even (and especially) the well-educated; and how the assumption of male superiority lingered on throughout the supposedly "liberal" sixties and seventies. As the author points out in "Afterwords," her book became a best-seller in Ireland because she articulated what many of her fellow-countrymen felt but couldn't say about their lives. But I think her experiences have a far wider relevance for any woman who grew up in the same time period -- and who's now struggling to make sense of her life.
Trustpilot
Copyright © 2022 Thriftbooks.com Terms of Use | Privacy Policy | Do Not Sell My Personal Information | Accessibility Statement
ThriftBooks® and the ThriftBooks® logo are registered trademarks of Thrift Books Global, LLC