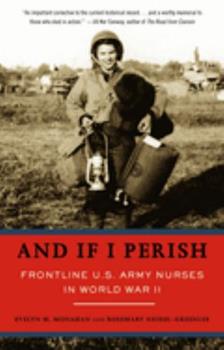 And If I Perish: Frontline U.S. Army Nurses in World War II

In World War II, 59,000 women voluntarily risked their lives for their country as U.S. Army nurses. When the war began, some of them had so little idea of what to expect that they packed party dresses; but the reality of service quickly caught up with them, whether they waded through the water in the historic landings on North African and Normandy beaches, or worked around the clock in hospital tents on the Italian front as bombs fell all around them...

My Mom Was a WWII Nurse

Published by Thriftbooks.com User , 14 years ago
My Mom was in the Army Nurse Corps in the EAME Theatre and received 4 Bronze Service Stars and 5 O/S Service bars during her military service. I was always interested to know what experiences she had, however she was reluctant to speak of those memories. After reading this book, I can understand why. "And If I Perish" is a great read to help one understand the dedication of the women of World War II and what they had to endure.

Published by Thriftbooks.com User , 17 years ago
I have wanted to write this review since I finished "And If I Perish", but, quite frankly, I did not know how to start. As a lifelong reader, a woman of a "certain age" and an English teacher, I must have read thousands of books over the years. This one is, quite simply, the best book I have ever read. One of the jacket cover comments uses the word, masterpiece, that barely describes it.The authors have done a magnificent job of weaving a seamless saga from the early days of WW II in North Africa, up through Italy and France and into Berlin. While I have read many books that chronicle the experiences of several people it was always difficult to keep them straight without a great deal of re-reading. Not so with these nurses, they are all recalled with no effort at all. While this is in no doubt due to Monahan & Neidel-Greenlee's formidable talents as authors, it is also because of these incredible nurses themselves. They were all of the things their daughters demonstrated about. They were brave, dedicated, self-reliant, tough, funny, compassionate, smart and inspiring. I am in awe of every one of them. They stand among the greats of the Greatest generation. Monahan and Niedel-Greenlee have done us all a great service by telling this story. Thank you both.

Published by Thriftbooks.com User , 17 years ago
This is an extremely well written and interesting book, covering a part of America's World War II history which has been sadly neglected. Almost half of the 59,000 female nurses who volunteered for the US Armed Forces during WWII served overseas. During the course of the conflict approximately 1600 of these nurses were decorated for their actions, receiving Distinguished Service Medals, Silver and Bronze Stars and Purple Hearts, among other awards. More than 70 of these nurses were captured and 217 died of injuries and illness, 16 as the result of enemy action. The authors spent over a decade tracking down surviving nurses and their friends and families in order to compile this well documented, personal and most entertaining book. Several of the key figures are followed from their recruitment before and during the early stages of the war throughout the entire North African and European campaigns. The rich detail and often tragic first-person accounts of landing with the Allies, particularly in North Africa, and the hard learned lessons of American unpreparedness for war are told with stark straight forwardness by those who participated. The authors have professionally woven in the larger strategic backdrop, along with significant tactical explanations, in a manner that tells the reader how the nurses and their various hospitals fit into the bigger scheme of the war. The nurses come alive through their narration, putting a very human face on horrific living and working conditions as their units keep close to the combatants. The portion of the book dealing with the nurses' struggles on the Anzio beachhead brings into sharp focus their absolute dedication to their profession under the most extreme of circumstances. This book is exceptionally well researched, with numbers and types of casualties treated in the various theaters of war routinely given, clearly putting emphasis to the great magnitude of what was being accomplished. A number of excellent photographs throughout the text show quite graphically the dangers of front line nursing and hospitals, the faces of the primary narrators and the environments in which they labored. This book will be a wonderful companion to the other great histories of WWII and is highly recommended.

And If I Perish

Published by Thriftbooks.com User , 18 years ago
If history had been taught like this when I was in school, I might have become an historian instead of a nurse. AND IF I PERISH makes it very clear that history is alive with wonderful stories and heroes yet unsung. I thank Monahan and Neidel-Greenlee for writing a book that is meticulous in the facts it presents, and thoroughly enjoyable as a good read----a combination not often found in books dealing with historical subjects. I hope these two authors will grace us with many more books in the future. As for AND IF I PERISH, it should be designated a national treasure and read by every American. It belongs in every library and on the bookshelves of every home. Once I began reading, I could not put it down. Wonderful, Wonderful!

Published by Thriftbooks.com User , 18 years ago
A thoroughly compelling work about the unsung and often forgotten heroines of WW II. This is truly a great book and will be remembered for its accurate and moving accounts of those who courageously and unselfishly served!
Copyright © 2020 Thriftbooks.com Terms of Use | Privacy Policy | Do Not Sell My Personal Information | Accessibility Statement
ThriftBooks® and the ThriftBooks® logo are registered trademarks of Thrift Books Global, LLC