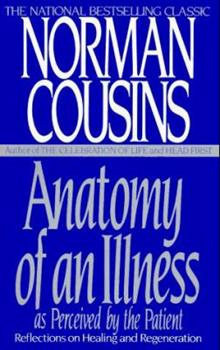 Anatomy of an Illness as Perceived by the Patient

Norman Cousins's enormously influential best-selling book illustrates the concept at the heart of the holistic health principle: that the human mind is capable of promoting the body's potential for... This description may be from another edition of this product.

Anatomy of an Illness

Published by Thriftbooks.com User , 12 years ago
This book is way ahead of its time. The author, Norman Cousins, a leading intellectual figure of his day, healed himself of a very serious illness with laughter and intravenous megadose vitamin C. It was assumed by the medical profession -- he was a UCLA patient -- be placebo effect on both laughter and intravenous megadose vitamin C. As usual, the medical profession was wrong about both. William S Eidelman, M.D. [...]

Should be required reading in medical school

Published by Thriftbooks.com User , 14 years ago
I don't recall when this book was first published, or who first told me about it. But, it definitely improved my outlook on things several decades ago when I was quite ill --- not incurably, or terminally, but a grave cost to quality of life, all the same. Reading this, in the early 1980s, I think, was the first time I'd realized that my own attitude could actually make a difference in the outcome of my health, and the rate at which my injury healed. It was a revelation --- one that several doctors were not to pleased to hear --- and one which helped me enormously. Of course personal attitude is far from everything. Having lost a friend to Hodgkin's --- which was totally curable when he was diagnosed in early stage one --- I'm painfully familiar with the risks individuals sometimes take by believing in phony spiritual cures and natural methods. Still, there's a lot more to be said for state of mind and good humor than many physicians are willing to admit, or discuss with patients, even now. If this book is not assigned reading in the first year of medical school --- and every year after --- it should be.

Published by Thriftbooks.com User , 18 years ago
This book revolutionized the way Americans think about health and health care. Diagnosed with a life-threatening and incurable condition, Cousins checked himself out of the hospital and basically healed himself with laughter, rest and Vitamin C. A few years later, he recovered from a major heart attack on his own and wrote about that, too. These books jump-started the whole field of mind-body medicine. Hundreds of books have followed in its tradition, including mine, The Art of Getting Well: Maximizing Health When You Have a Chronic Illness. Anatomy of an Illness holds up well. I just re-read it and it's still relevant. Not everything here will apply to most readers, because Cousins was a major cultural figure with many physicians among his friends. Not everyone would have his self-confidence or his sources of support. But his ideas and his approach are more needed than ever today.David Spero RN www.art-of-getting-well.com

Raises Medical Memoir to the Level of Literature

Published by Thriftbooks.com User , 21 years ago
As an essay, Anatomy of an Illness is engrossing. At as a work of inspiration, it is indispensible. Anyone you know who is ill, or who simply cares about his or her state of health, will gain wisdom and hope from this carefully constructed, sober, yet passionate memoir of healing.

Published by Thriftbooks.com User , 23 years ago
Norman Cousins examines such topics as creativity and humor as being essential to treatment. Important to anyone touched by chronic illness. This was one of the first books my husband Tom and I read when we found out he had Alzheimer's disease. It was one I found particularly helpful in meeting the demands and changes Tom's illness imposed on me. It is a book that talks about outlook and attitudes and taking charge of one's life.
Trustpilot
Copyright © 2022 Thriftbooks.com Terms of Use | Privacy Policy | Do Not Sell My Personal Information | Accessibility Statement
ThriftBooks® and the ThriftBooks® logo are registered trademarks of Thrift Books Global, LLC