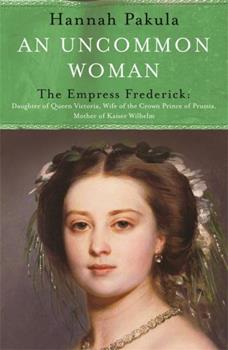 An Uncommon Woman : The Empress Frederick

An epic story of wars and revolutions, of the rise and fall of royal families, and of the birth of modern Germany is brilliantly told through the lives of the couple in the eye of the storm--Queen... This description may be from another edition of this product.

An insight into German history

Published by Connie F. , 2 years ago
I loved this book! Because Vicky was married to The Crown Prince Of Prussia, we get to see the makings of modern day Germany. We also see personal family insights into interactions between Queen Victoria and her adult children. This book filled in the blanks for me about how Germany arrived at the Third Reich and welcomed The machinations of Adolph Hitler. “An Uncommon Woman” tells the real story of Empress Fredrick, her husband Fritz, their son Wilhelm II, and Otto von Bismarck. Really fascinating for a history buff.

Excellent Portrait of Empress Frederick and Her Times

Published by Thriftbooks.com User , 16 years ago
An Uncommon Woman is an excellent, first rate biography of Vicky, eldest daughter of Queen Victoria who, through marriage, became the Crown Princess of Prussia, and then Princess and later Empress Frederick of the German Empire. She played an influential (and one wishes a much more influential) role in German, and more broadly European, history during the latter 19th to early 20th centuries. Vicky strove to move German politics towards a more liberal, democratic, parliamentary form of government, but was successfully opposed by the autocracy of Chancellor Bismarck and even her son, who eventually became the Kaiser. The author persuasively implies that had this "uncommon woman" been able to prevail, European history may have benefited. The book succeeds as both an intimate, full-fledged account of this remarkable woman, her family members, and the many important historical persons of the times, as well as a comprehensive history of the creation of the German Empire, the rise of autocracy and militarism, and the lead-up to World War I. The writing style is excellent; the author is exceptionally skilled at presenting a thoroughly well-researched life of Vicky and detailed history of the times in a highly readable, well paced narrative. One of the most engaging and informative biographies I have read. Highly recommended.

Published by Thriftbooks.com User , 16 years ago
You will feel great sympathy towards Vicky, the Empress Frederick, who was an unfortunate hostage to the intrigues of the German court. Sympathy will soon give way to awe at her courage and determination to do her best while having to perform the impossible: being all things to all people. Vicky was seen as the catalyst for change in Germany. Her parents, Queen Victoria and Prince Albert did not like the autocratic, militaristic way in which Emperor Wilhelm I was running Prussia. Instead, they visualized a united German nation with a government much like that of England. Their plan was to sow seeds of liberalism and constitutional monarchy through their daughter and her marriage to Wilhelm's son, Prince Frederick (Fritz). In preparation for the eventual match, Vicky was schooled in politics and German life by Prince Albert. Eventually, she and Fritz would be Emperor and Empress of Prussia, and could bring about German unity. Little did Vicky know that upon arriving in Berlin, she was at a disadvantage from the start. As the daughter of Queen Victoria, she was encouraged to retain her Englishness yet was expected to be a Prussian wife and princess. Her efforts to raise her eldest son Willy as Prince Albert had raised her backfired. Her tendency to over-criticize (a trait passed on from Victoria) turned the young Wilhelm away, and he grew up under his thoroughly Prussian grandfather Wilhelm. Otto von Bismarck had seen his own chance to manipulate the future emperor, and along with the groveling royal court, Willy was turned into a bombastic power fanatic. Her relationship with Fritz was not seen as loving, but as an English princess scheming to Anglicize the House of Hohenzollern. Vicky was painted as "die Englanderin", unfaithful to Germany and a demon on the shoulder of her husband, whom she 'manipulated'. Hopes that Fritz's mother, Empress Augusta, would watch over Vicky were dashed. Augusta was known to be very liberal and free-thinking, unusual for royal women of the time. In her they thought they had an ally, but both the Queen and Vicky would be sorely disappointed. The once-progressive Augusta had seen her marriage to Emperor Wilhelm unravel over the years, and as a result she became a bitter, self-absorbed woman. She gave Vicky little support in her new role. When they finally became Emperor and Empress, Vicky and Fritz had precious little time to implement any real changes. Fritz died from cancer of the larynx three months into his reign. Upon his passing, Vicky was left alone and devoid of support or influence. Your heart cries at the unfairness of brilliant minds wasted, while Willy becomes Kaiser Wilhelm II - egotistical, manipulative, and dangerous. Thankfully, Vicky did not live to see the destruction of the Hohenzollern dynasty when Wilhelm II pulled Germany and England into a devastating world war. After fighting his own relations across Europe, he headed into exile, never to see the throne again. Albert's catalyst di

Amazing! A "must read" book if German History is your bag.

Published by Thriftbooks.com User , 19 years ago
This book is an amazing mixture of biography, political history and peeks inside the royal houses of 19th century Europe. The story of Vickie is the premise of this detailed book but the author has made it so much more than that. "An Uncommon Woman" not only taught me about the tragic life of The Empress Frederick but also presented the story of the German people and creation of The German Empire in such a clear, concise and detailed manner that for the first time ever, German history actually makes sense to me.

A study in contrasts

Published by Thriftbooks.com User , 19 years ago
Like many royal personages,Kaiserin Friedrich was multi-faceted and a mass of contradictions.Ms. Pakula guides us masterfully through this remarkable woman's life.The more one learns of her often difficult role as crown princess and later empress ,the more one admires her .This book provides excellent material for the history scholar and succeeds in being highly enjoyable-historian or not.

Published by Thriftbooks.com User , 21 years ago
Vicky, Princess Royal of Great Britain and Empress Frederick of Germany, was raised by her parents Queen Victoria and Prince Albert with a specific purpose. She was to be the instrument by which the divided Germany of her youth was to be unified and remade in the image of Britain, a constitutional monarchy with leanings towards liberal democracy. Vicky did her best to accomplish this, and to a point she succeeded. She was a great and positive influence on her husband Frederick (Fritz) and helped wean him away from the Prussian militarism in which he had been raised. Unfortunately, Vicky was unable to overcome the influence of Otto von Bismarck on her father in law Kaiser William I. Bismarck united Germany, but as an absolute monarchy with only a travesty of representative government. More tragic was Vicky's failure to influence her son and Fritz's heir, the future Kaiser William II. When "Willy" came to the throne after Fritz's tragic death in 1888, he inexorably led Germany down the road to World War I. Since Vicky failed, why read her story? Because she was a brilliant, brave, charming, stubborn woman dedicated to her principles. She loved her family and both her countries with all her heart. Today she should be remembered as a woman who could have changed so much history for the better had she only had the chance.
Trustpilot
Copyright © 2022 Thriftbooks.com Terms of Use | Privacy Policy | Do Not Sell or Share My Personal Information | Accessibility Statement
ThriftBooks® and the ThriftBooks® logo are registered trademarks of Thrift Books Global, LLC