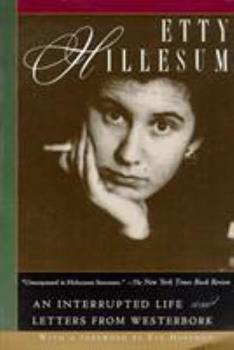 Etty Hillesum: An Interrupted Life and Letters from Westerbork

For the first time, Etty Hillesum's diary and letters appear together to give us the fullest possible portrait of this extraordinary woman. In the darkest years of Nazi occupation and genocide, Etty Hillesum remained a celebrant of life whose lucid intelligence, sympathy, and almost impossible gallantry were themselves a form of inner resistance. The adult counterpart to Anne Frank, Hillesum testifies to the possibility of awareness and compassion...

One of the most inspiring books I ever read

Published by Thriftbooks.com User , 13 years ago
This book is one of the most touching and inspiring books I ever read. This book will touch the heart of anyone - whether Jew, Christian, Muslim, Buddhist, etc. and even an atheist! The battle of a soul in those dark days (the German Occupation in the Second War World) trying to keep sane, asking herself how not to loose hope and remain human, avoiding hate, in spite of all what is going around her. This is a journey of a Soul from focusing in herself changing to focus in the world around her. I bought the book also for 3 friends of mine as a New Year present! P.S.: Since my English is NOT my mother tong (I'm an Israeli), I'm apologizing in advance for spelling (and other mistakes). Thank you for understanding.

Published by Thriftbooks.com User , 20 years ago
In these trying times, this book is a gentle reminder that terrible events have the curious power to make us better (more caring, more open, more alive) people. I was utterly transfixed by Etty's swift transformation from a self-absorbed whiner to a spiritual and philosophical mystic who transcended the horrors of her time.As a memoir of life and death during the Nazi Holocaust, as well as a chronicle of spiritual transformation, this ranks among the very best.Though it has been five years since I read the book, I am still inspired by Etty's courage and love.

This Is Difficult to Get Into, But Well Worth Staying With

Published by Thriftbooks.com User , 20 years ago
I found this book very difficult to get into. Like many spiritual journals this book seemed at first overly self-centered and indulgent; one page read boringly very much like the page that went before. Her sleeping around and her bizarre therapy with Spier put one off. And Etty herself felt very deeply, vehemently, passionately; reading her can be like drinking water from a fire hose. One might feel like giving up the battle, but it will be well worth your while to push on. More and more one begins to see astonishing signs of spiritual growth and maturity and then of extraordinary achievement and grace. Emotionalism passes into selfless and self-sacrificing love. She moves speedily from her first ability to say the word God to constant prayer and even to a mystical union, all the more significant for being so unrelated to any conventional religion. In the midst of ever increasing certitude about coming annihilation, and eventually amid the horrors of the transit camp of Westerbork, this young woman not only manages to preserve her sanity and keep herself from hating her persecutors, but somehow even comes to rejoice in the beauty and meaning of life. It is truly a wonder how anyone could manage to grow to such transcendent greatness of spirit in so short a time. How fortunate for us that it happened to a woman who felt so deeply, knew herself so clearly, and wrote so aptly, and whose writings from the midst of the Holocaust has survived to our time.

One of the Most Inspiring Books I have Ever Read!

Published by Thriftbooks.com User , 21 years ago
I was first drawn to this book by the black and white photo of Etty on the cover -- belying a woman who was thoughtful, mysterious, bohemian. Then when I saw that this was truly a book that was inspirational -- and written by someone who was herself a victim of the Holocaust -- I was indeed intrigued and purchased the book in anxious anticipation.However, nothing prepared me for just how truly enlightening this book was to be! Etty lived in the same time period and only blocks from where Anne Frank was hiding, and had the advantage of living as a Jewish housekeeper in a non-Jewish household. Indeed she had many advantages that could have, has she pursued it, possibly spared her ultimate end at Auschwitz. However, Etty had some strong feelings, which she mentions more than a couple of times. One is that she did not see why she should be spared what so many thousands of others were having to bear. However she also dearly hoped to live past the end of this terrible era -- and she felt always certain that this dark era would end -- especially so that she would be able to tell the world something so important, and have the world listen. She would tell the world that "life is beautiful, in spite of everything." Though her life was cut off in Auschwitz in November of 1943, the book perhaps can fulfill that dear hope. No Pollyanna or ostrich, Etty experienced her ups and downs fully. Yet she had a deep understanding of real fulfillment in and gratitude for life. Most importantly, she looked for her answers within, and while the world with out was often atrocious, clearly what she found within was a source of constant beauty and sustenance.The only explanation I can find as to why I had not heard of her before -- and why her name is not as well known as that of Anne Frank -- was her very liberal attitudes which were no doubt especially unpopular after the war, including a very liberal attitude toward sexuality and an, albeit constructive, criticism of fellow Jews who responded to the Holocaust only with hatred and bitterness.Etty Hillesum's life, and her reflections in this book containing her diaries and letters from a Nazi work camp, are rare and sparkling jewels indeed. I recommend this book -- especially those who are late teens through eldest adult! Bravo, Etty. Note: I recommend that one not skip even one page of the initial forward and preface. It is a wonderful and immensely helpful introduction into the book.

A brave and luminous soul revealed in Holocaust shadow

Published by Thriftbooks.com User , 23 years ago
"I can't take in how beautiful this jasmine is. But there is no need to. It is enough to believe in miracles in the twentieth century. And I do, even though the lice will be eating me up in Poland before long."Intellectually gifted and spiritually impelled, Etty Hillesum began her amazing diary shortly after Hitler's invasion of Holland. She continued for three years, until she volunteered to accompany the first group of Amsterdam Jews to the Westerbork camp, from which all were deported to Auschwitz where she died at age 29.Many rich layers are revealed in the diaries and letters: snippets of Etty's daily life among friends, family, and academics in Amsterdam under the encroaching German threat; Etty's struggle with her fierce moods and strong sensuality; her love affair with a much older and most unusual therapist; and the struggle of a budding artist to find expression in words.Above all, the diary chronicles Etty's spiritual awakening in the face ! of death. Etty's addresses God freely and spontaneously with an unconventional and wholly authentic religiosity. She calls herself "the girl who learned to kneel."While others around her despaired or made frantic preparations to escape, Etty considered herself a witness to history and desired to fully live and record not only "the experiences they have prepared for us all" but her conviction of the ultimate worthiness of life "despite everything we human beings do to one another."At the same time I was reading Etty's diaries, I was also reading some existentialist writers: Kafka, Sartre, Camus. In contrast to their mewlings of meaninglessness, a slip of a girl with bleeding stomach ulcers, who gave up her beloved desk and books, family, friends, and lover to sleep on straw in a work camp wrote, "I often walk with a spring in my step along the barbed wire and it comes back to me, I can't help it, a great fundamental feeling that life is ! beautiful and yes, meaningful."Etty was no cloudy-h! eaded mystic in denial of reality. She knew full well the horrors of her time, the fate of the Jews, the visions of "poisonous green smoke." She looked them fully in the eye and prepared herself to accept "death, even the most horrible death" as part of the experience of being alive.Kafka wrote, "We ought to read only the kind of books that wound and stab us... A book must be the axe for the frozen sea inside us." An Interrupted Life and Letters from Westerbork is that kind of book.
Copyright © 2022 Thriftbooks.com Terms of Use | Privacy Policy | Do Not Sell My Personal Information | Accessibility Statement
ThriftBooks® and the ThriftBooks® logo are registered trademarks of Thrift Books Global, LLC