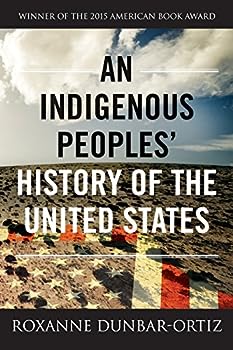 An Indigenous Peoples' History of the United States

2015 Recipient of the American Book Award The first history of the United States told from the perspective of indigenous peoples Today in the United States, there are more than five hundred federally recognized Indigenous nations comprising nearly three million people, descendants of the fifteen million Native people who once inhabited this land. The centuries-long genocidal program of the US settler-colonial regimen has largely been omitted from...

Excellent and important reading for anyone

Published by Julian Cecil , 1 year ago
In accessible language, Dunbar-Ortiz provides a rigorous history- both in its content and approach to understanding history itself. The narratives are well-researched and well-told while providing thorough intellectual and linguistic framework for understanding colonization and resistance. It’s a great starting point for anyone, but still valuable to a more seasoned reader. I highly recommend!

A narrative so revisionist it staggered this attendee-product of public school.

Published by Thriftbooks.com User , 5 years ago
Her story is believable because it mirrors Inca, Mayan, and more accounts of indigenous peoples' advanced civilization in the Western Hemisphere. She delves into that in Chapter 1 I wondered how "Indians" walked silently in the forest. Ever tried it? Well, if forest was as described in this book in the sixteenth-seventeenth century when settlers from Europe arrived then it is plausible. Excerpts from early Chapter 3 “Many have noted that had North America been a wilderness, undeveloped, without roads, and uncultivated, it might still be so, for the European colonists could not have survived. “Neither the technology nor the social organization of Europe in the sixteenth and seventeenth centuries had the capacity to maintain, of its own resources, outpost colonies thousands of miles from home. “Incapable of conquering true wilderness, the Europeans were highly competent in the skill of conquering other people, and that is what they did. They did not settle a virgin land. They invaded and displaced a resident population. “This is so simple a fact that it seems self-evident.”
Trustpilot
Copyright © 2022 Thriftbooks.com Terms of Use | Privacy Policy | Do Not Sell My Personal Information | Accessibility Statement
ThriftBooks® and the ThriftBooks® logo are registered trademarks of Thrift Books Global, LLC