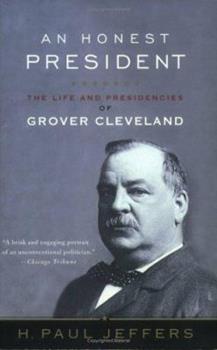 An Honest President: The Life and Presidencies of Grover Cleveland

A biography of the only president to be elected to non-consecutive terms reveals a tough, honest, courageous leader who took responsibility for his actions and wasn't afraid to take on corruption where he saw it.

A Great Overview of His Life

Published by Thriftbooks.com User , 18 years ago
In a quest to read a biography of every American president, I found this one of Cleveland a satisfying and easy read. Jeffers doesn't seek to make the bio an in-depth study of his personal knowledge of English vocabulaly; thus the easier read, a welcome break from the 600-pagers of some other presidents. Although over 300 pages, this biography goes fast and I didn't find myself wishing it would end. It gave the facts truthfully, thoroughly and precisely; and that's what I needed.

Could use some beefing up

Published by Thriftbooks.com User , 21 years ago
H. Paul Jeffers' biography of Grover Cleveland is really a great read. If you're interested in American history, you'll enjoy this book about a fascinating and remarkable figure in U.S. politics who is largely ignored by modern writers. If your knowledge of the American "Gilded Age" is limited to your high school or college classes, you'll do yourself a favor by reading this book. Jeffers does a good job in bringing the era and personalities to life, but his writing of Cleveland's years as president often seems to be merely listing his official schedule of activities. Don't let this criticism dissuade you, however; my test for any book while reading it is "when can I get time to read more?" This book definitely passes the test.

A readable biography of an underrated president

Published by Thriftbooks.com User , 21 years ago
H. Paul Jeffers presents an exceptionally interesting biography of an often overlooked president. Cleveland suffers in part from the anonymity bestowed upon presidents who served in the "Gilded Age". For presidential legacies it is an advantage not a curse to serve in "interesting times". Jeffers correctly points out that the two Cleveland administrations were in actuality quite "interesting". During the two Cleveland administrations we had the Pullman strike, the second worst depression in our nation's history, and problems to deal with in Venezuela and Hawaii. Cleveland who is generally considered by historians, at best, as an "above average" president suffers from not being involved in a war. Of our wartime presidents, only Madison and McKinley are not consistantly ranked higher. Jeffers does an excellent job at describing his meteoric rise from private citizen to the presidency within three short years. He also describes Clinton's audacity in comparing himself to Cleveland. After reading this book, it would be difficult to think of two presidents who were more different. Cleveland was not overly ambitious and entered the presidency as a bachelor. Clinton is ambitous to a fault and married to a woman who is more ambitious. Cleveland gained his popularity through principle. Clinton places more importance on opion polls. Cleveland admitted to both fathering an illegitimate child and paying a surrogate to take his place in the Civil War. Clinton faced similar issues with lies and half truths. My only criticism of the book was the fact Jeffers could have been more critical. Except for his handling of the Pullman strike, there was little disapprobation. At times, I felt that Jeffers would not mind celebrating his birthday as another national holiday or putting a fifth head on Mt. Rushmore. What separates Cleveland from the truly great presidents is leadership ability and his reluctance or inability to better articulate his philosophy of government. He was unable to sell congress on his ideas of lowering tariffs or even lead his own party in regard to the gold standard. In action, he actually did more to limit government than Jefferson, but we are left to discover his philosophy of government inductively in that he primarily laid down his thoughts issue by issue. In summary this was a book that I could not put down and I highly recommend it.

Published by Thriftbooks.com User , 21 years ago
The title of this book might seem an oxymoron to readers whose memories extend no further than the past eight years. It is refreshing to read about a President who put principle before self-advancement, confronted embarrassing revelations about his private conduct with candor, and believed a politician had to "stand for something" in order for an election to be worthwhile.Cleveland's rise can only be described as meteoric: from Mayor of Buffalo to the New York statehouse within two years, and the White House two years after that. Once in office, he blazed a trail uniquely his own: pro-gold standard, anti-tariff, pro-rule-of-law, anti-government activism. More than 100 years after the fact, Cleveland's viewpoints are often startling. For example: "the people support the government; the government should not support the people." On the evils of government supluses: "The public treasury . . . becomes a hoarding place for money needlessly withdrawn from trade and the people's use, thus crippling our national energies, suspending our country's development, preventing investment in productive enterprises, inviting schemes of public plunder. It will not do to neglect this situation because its dangers are not now palpably imminent or apparent." Are you listening, Messrs. Bush and Gore?

At last, a book about an obscure American President.....

Published by Thriftbooks.com User , 21 years ago
Imagine my surprise when I discovered this long-awaited biography of our 22nd and 24th president! As a release from the hundreds of redundant titles about Lincoln or Washington that are produced each year, this book provided me an opportunity to visit with a man too many ignore or misunderstand. The author provides a clean, concise account of his life (usually hitting only the high points rather than indulging in endless detail), and provides a fair, balanced description of his presidency. Still, it was most fascinating to read about Cleveland's rapid ascent from obscurity to the White House. Here was a man, who within three years (1881-1884), went from mayor of Buffalo to become a successful presidential candidate against powerful Republican James G. Blaine. As a politician, whether on the local or national level, Cleveland took controversial stands, challenged established members of his party, vetoed popular bills (risking always an override), and revealed private, potentially harmful information in the name of truth an openness. The author by no means paints a picture of perfection (his decisions as president are up for historical debate), but whatever position he took, Cleveland never betrayed his sense of duty and loyalty to the social good. That sense might have been wrong on several occasions (his handling of the 1894 Pullman strike, for example, which pushed the envelope of federal intervention in state matters), but he never compromised out of fear or a desire to cater to party officials. While there are many accounts of Cleveland's happy marriage to Frances (almost thirty years his junior) and their children (one of whom was, in a first, born in the White House), the book is an important contribution primarily because of its reassessment of his political life. Additionally, the author gives us a vivid representation of the late 19th century itself (as all presidential biographies must); a time rife with labor wars, economic crises (the Panic of 1893 was one of the nation's worst depressions), racial conflict, immigration debates (Cleveland signed the Chinese Exclusion Act yet vetoed a bill forbidding illiterate immigrants), imperialism abroad, and impending war with Spain. While the author resorts to a few cheap shots against President Clinton in the end (I suppose no contemporary book about politics would be complete without it), the book maintains a satisfactory level of detachment throughout. While books such as these will never light up the bestseller lists, I am thankful that they are written. Mr. Jeffers should be applauded for tackling a forgotten man while always keeping it accessible, appealing, and worthy of the subject.
Copyright © 2020 Thriftbooks.com Terms of Use | Privacy Policy | Do Not Sell My Personal Information | Accessibility Statement
ThriftBooks® and the ThriftBooks® logo are registered trademarks of Thrift Books Global, LLC