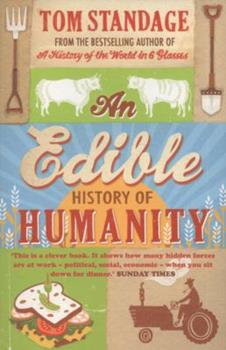 An Edible History of Humanity

The bestselling author of A History of the World in 6 Glasses charts the enlightening history of humanity through the foods we eat. More than simply sustenance, food historically has been a kind of... This description may be from another edition of this product.

Too Many "Aha!" Moments to Count

Published by Thriftbooks.com User , 12 years ago
This book is like Michael Pollan on prozak. Like Pollan, Standage weaves a fascinating story that pulls our most basic daily craving into a rich fabric of history and culture. Unlike Pollan, he tells the story from the perspective of human circumstance and creativity in a way that celebrates history without blame or judgement. Throughout, Standage uses food to explain the big questions of history that I never thought to ask - Was agriculture good? Why did Britain industrialize first? Why did evolutionary theory come so late? - in a way that will continue to shift the questions I ask about history. I recommend this book to anyone who eats.

Fascinating and fun to read

Published by Thriftbooks.com User , 13 years ago
Throughout history food has had a big impact on civilization and even built civilizations around the world. Its influence over history has reached into modern times, as food shortages and abundances fueled development or cutbacks. AN EDIBLE HISTORY OF HUMANITY deserves a place in any lending library as a fine survey of how humanity's progress has often been dictated by the availability or lack of foods, and the kinds of foods available. Fascinating and fun to read.

Published by Thriftbooks.com User , 13 years ago
That food looms large at the crossroads of every major event in human history may seem obvious. Everybody's got to eat, right? Wars have long been fought over arable land or better hunting grounds. Innovations in food production - from fire to farming to frozen food - spur big changes in society. Journalist and author ("A History of the World in Six Glasses") Standage takes these truisms and examines them up close, beginning with farming. Fire increased the abundance of food by making it more digestible, but farming was a mixed blessing. Yes, it allowed for increased population - predictable food supply, more babies since it was no longer necessary to carry the family from place to place - but the bigger population worked harder and was less healthy. "Compared with farming, being a hunter-gatherer was much more fun," Standage points out. Studies of modern-day nomads show they spend less than 20 hours a week on food procurement. "If effect, hunter-gatherers work two days a week and have five-day weekends." The farmers, with their monotonous grain diet, were also less healthy. Archaeological dental evidence shows that farmers suffered from nutritional stress and that height decreased 5 to 6 inches in both sexes in the 4,000 or so years it took for farming to take over the globe. So why did they do it? "The short answer is that they did not realize what was happening until it was too late." It was a gradual process, in terms of the human lifetime. That climate change played a significant role seems to be the one thing most scientists agree on. Standage looks at the evolution of cereal grains, particularly corn, and the role food played in developing centralized social hierarchies and religious rites before jumping on a few years to the craze for spices and the consequent push for exploration, conquest and empire. In addition to the discovery of the Americas, Standage explores the Arab and Chinese roles in the spice trade, the "communications networks" of trade routes among Arabs, and the spread of Islam, which helped spur the European drive for alternate routes. He looks at food's role in war, feeding an army - and its animals - being no small feat. The old proverb, "For want of a nail..." could as easily be "For want of a wagonload of hay..." As the world grew smaller, through exploration, industrialization and invention, wars grew larger and more complicated. Standage homes in on Napoleon, showing how food supplies were an integral part of his ingenious planning and his eventual downfall. The interconnectedness of seemingly distant things is a constant theme. Coal, for instance. As more land is cultivated, coal becomes cheaper than wood. Britain's plentiful supply spurs the invention of the steam engine (to pump out flooded mines) and greater prosperity, from more glass in British windows to a booming energy-gobbling textile industry. And into this cycle of consumption and expansion comes the potato, which helps fuel the cheap labor of th

A multi-disciplinary view of food domestication and human history

Published by Thriftbooks.com User , 13 years ago
What an interesting way to look at human history! This book starts off with making the point that none of the plant foods we eat today are "natural", but were selectively developed in near pre-history by our ancestors out of wild plants that are very different, and talks about what kinds of genetic changes happen to a wild plant to make it suitable for domestication. Then it talks about the transition from hunting-gathering to farming, from small bands with few possessions to large settlements with lots of possessions and social stratification. Next it looks at spices, the spice trade, how it drove the exploration of the world, the exchange of knowledge and ideas, and colonization. In the more recent centuries, the book talks about the spread of a few staple foods such as potato, maize, and wheat around the world, how food supplies (or lack of) affected military campaigns, the development of canning as a food preservation technique, famines in regions dependent on mono-crops, industrialization, the chemical explorations that led to the development of artificial fertilizers, the "green revolution" and modern plant selection. It closes with the Svalbard Seed Bank. Regarding the reviewers who found it dry: at first, flipping through the book, it looked dry, but once I started reading the words, I was fascinated with this novel way of looking at the development of civilization. I guess it all depends on where your interests lie, I am interested in food and botany and new ways of looking at history, so this book hit the spot for me.

History At Its Most Essential Level

Published by Thriftbooks.com User , 13 years ago
Tom Standage is a journalist rather than a formal historian, but this book, along with his previous A History of the World in Six Glasses, are examples of history writing at its best. In this work, Standage examines the basic human need for sustenance and traces how that need has led to the development of civilization. He begins with the hunter gatherers, goes on to the development of agriculture and the evolution of a more sedentary lifestyle in small villages, then on to the ever increasing complexities of the civilized world. Standage includes many intriguing stories, like the development of maize as a genetically modified crop by the ancient Native Americans; or the discovery of trade wind patterns in the Indian Ocean as a by-product of the classical desire for spices. Much of Standage's work will sound familiar to readers of Diamond, McNeill, and Crosby, but his concentration on humanity's search for reliable food supplies is unique and very valuable. He writes entertainingly without sacrificing scholarship, and An Edible History of Humanity will appeal to professionals and amateurs alike.
Trustpilot
Copyright © 2022 Thriftbooks.com Terms of Use | Privacy Policy | Do Not Sell or Share My Personal Information | Accessibility Statement
ThriftBooks® and the ThriftBooks® logo are registered trademarks of Thrift Books Global, LLC