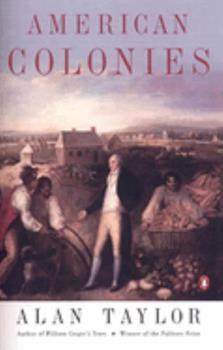 American Colonies: The Settling of North America (the Penguin History of the United States, Volume 1)

AMERICAN COLONIES starts with the earliest years of human colonization of the American continent and environs with the Siberian migrations across the Bering Strait 15,000 years ago. It ends in around 1800 when the rough outline of the contemporary North America could be perceived. Dropping the usual Anglocentric description of North America's fate, Taylor brilliantly conveys the far more vivid and startling story of the competing interests--Spanish,...

Good review of things I forgot (or maybe never knew)

Published by Thriftbooks.com User , 17 years ago
Taylor provides an extensive - 526 pages including bibliography and index - overview of European colonial initiatives in the Atlantic, North America and parts of the Caribbean from the early 1400s - when Portuguese and Spanish proto-colonists got their feet wet, so to speak, by colonizing the Azores, Canaries and Medeiras - through Spanish and Russian efforts on the West Coast in the early 1800s. Substantial space is given to colonial efforts of the French, Dutch, and Spanish as well as English settlement in the eastern Caribbean and the east coast of what eventually became the United States. A tragic theme throughout the book is the encounter between Europeans and Native Americans that decimated the latter, primarily through inadvertent introduction of diseases but also through warfare, slavery, appropriation of their land and destruction of the environment on which the Indians relied. Taylor also describes how the Indians repeatedly collaborated with or benefited from European traders and colonists when they perceived - often erroneously - that the Europeans' actions benefited their own economic and strategic interests. And, yes, the Indians traded in slaves - either other Indians or Africans - as well. The role and some of the impact of enslaved Africans on Colonial development is also described throughout the book. Regarding the English colonies that became the original thirteen United States it's helpful for Taylor to remind that most of the colonies had unique beginnings that influenced their cultures and economies and politics for many years after the American revolution. For example, South Carolina essentially began as a colony of the fabulously wealthy colony of Barbados, and initiated use of enslaved Africans on a scale that dwarfed the Chesapeake tobacco plantations. And Pennsylvania started relatively late but grew quickly and prosperously as the initial English Quakers were quickly outnumbered by industrious German family farmers as opposed to indentures servants or slaves. I recommend this book to anyone with an interest in Euro-American settlement, the formative history of the United States and the interaction of Europeans with Native Americans.

Published by Thriftbooks.com User , 19 years ago
More than any other history book I have read this book confirms Edward Gibbon's dictum that history is "little more than the register of crimes, follies, ad misfortunes of mankind. It is a history of the Americas starting with pre-Columbian times and continuing until about the time of the American Revolution. While I am hardly an expert, the author is very familiar with the literature on his topic. His opinions seem well reasoned to me and are consistent with what I do know independent of this book. The overwhelming impression of this book is just how nasty brutish and short life was in the fifteenth and sixteenth centuries in both Europe and the Americans. How badly the Native Americans were treated is common knowledge. But the desperation behind the greed and cruelty of the Europeans is less well known. Most of the people who came to the "new world" were driven by poverty to risk all with the odds against them. It is hard to believe that anything as wonderful as the United States could have had such terrible beginnings. The worst thing the Europeans did was done accidentally. Europeans brought diseases with them and infected the Native Americans. The author cites new research and studies by anthropologists that suggest that in the century after Columbus the native population of about 50 million shrank by 90%. This is more than anything else what made the cruel conquest possible. And the author says that the English learned how to treat the Indians by their conquest of Ireland. Until the Nazis unleashed the holocaust, history may have known horrors equal to the conquest of Ireland, but nothing worse.The Europeans were little better to each other. In an early settlement on the Chesapeake one man who stole some oats had a rod thrust through his tongue and then he was chained to a tree to die from starvation. This shows how close to the edge of starvation the colony must have been to resort to such drastic actions. Most people who emigrated from England were bound to four years service before they got their freedom. Not many lived long enough to gain it. Fewer still became rich. But there were more impoverished laborers in England to replace them. And there were the horrors of slavery-mostly black African, since Indians died too quickly. The only decent story is that of William Penn and the Quakers. Under his guidance they dealt fairly with the Indians near them and paid a fair price for their land, of which they had plenty to sell due to smallpox. In Barbados one Quaker was killed and the rest expelled for having the temerity to teach black African slaves the Christian gospel-and this at a time when almost everyone believed Christian faith was the only escape from eternal damnation. But the plantation owners did not want to have to deal with Christian slaves-they might feel they had to treat them better. French Jesuits and Spanish Franciscans also tried to convert the Indians, but with little success.If you want

Not a traditional history of colonial North America...

Published by Thriftbooks.com User , 19 years ago
...something much broader, deeper, richer, and ultimately much more satisfying. Histories of colonial North America usually have as their starting points the arrival of the British and end with the American Revolution. Not so here. Taylor's scope is broad enough to include the history of early Native Americans, not just at the time of discovery, but hundreds of years earlier. Even more interestingly this view is not limited to the Native Americans in what would eventually become the US, but looks at those living throughout North America, Central America, and the Caribbean. The richness of this history comes by way of the various cultures that are included. From the perspective of the East coast of the continent, the story of colonialism involves the British and the Native Americans. When the view extends North to Canada then we include the French. What Taylor does is show the perspective from all angles, and this means that Spanish and Dutch influences were also important, the former especially so in the West. Chapters on the history of different regions rather than single countries or islands highlights the fact that there were diverse influences which oftentimes overlapped and interacted. There are chapters on the Carolinas, the West Indies, New England, the Pacific Coast and Chesapeake region. Certainly not left out of this analysis is the huge role Africa and its sons and daughters played in the settlement of our continent. This is the first Volume in the Penguin History of the United States. It seems ironic then that the books main argument is that the colonization, settlement and growth of the AMERICAN COLONIES was a process in which the eventual emergence of the US was only a very dim vision on the far horizon. The book is well written, thoroughly researched and deeply insightful. Although it is colonial history, its tale as told here has as much resonance and meaning for us today as it must have had in living it.

Published by Thriftbooks.com User , 19 years ago
This book represents current historical thought and writing at its best. Taylor has done what few historians today can accomplish. He has taken all of the areas that specialists now delve into and pieced them together into a coherent overview. This is a picture of colonial America from the perspective of Englishmen, Frenchmen, Spaniards, and Native Americans. The writing is excellent, the thoughts of the writer are clearly conveyed and easy to grasp. Every reader will come away from this book having learned something about colonial America. Most will come away having learned a great deal... And they will have enjoyed doing it. Could not recommend it higher.

An absolute must read.

Published by Thriftbooks.com User , 19 years ago
I first noticed the Native American void in history books just a few years ago. I was trying to find which tribes lived near Frederick Co. Maryland, and the information simply wasn't there. I am a hired researcher, so when I say the information wasn't there, I mean that it would take the average person about a year to track down anything at all on the topic. There is a real void in the history of the Americas and there are very few books that treat pre-colonial, non-European American history with any sense of depth or fairness. This book truly gives you a full-scale idea of what shaped the Americas into what they are today. Finally you can read about what was happening with the native population during the time of contact and conquest. Finally you can get an idea about the environmental and economical impacts of colonialization, both in the Americas and in Europe.This book is truly a history of "actions" and not "thoughts". Often what we learn in American schools today is what the Puritans were thinking about doing, or what our founding fathers wanted to create out of the Americas. Instead, we learn about the actions they actually took. Which colonies took up the practice of slavery, and why? How succesful where the Puritans in being pure? What was Colombus really thinking?While the book feels slanted to the leftist mentality, I think you'll find the author treats all groups fairly, focused on their actions and not their intentions. The few books I've read that tried to cover a more holistic history of the Americas usually go too far in the opposite direction, painting all colonists as depraved ravagers, and all natives as white-washed saints. Instead, this book portrays both peoples in their full depth, portraying a complicated, terrible and all too human history. While I mostly address the native vs. European issue in this review, there is much more going on here. Impacts of trade, morality, religion, government all play out. This is the book we all should have read in our Intro to American History class.To finish up, this is one of those rare books that I think everyone should read. We will never understand how we can do better unless we learn what we have done wrong. I was truly floored at how much new information was here. Why is it so difficult to find books that cover the full scope of U.S. history? How can we understand what's going on in our country, if we don't understand how it even came to exist? This book is easy to read, well-written, and amazingly well-researched. If you want a real idea about what shaped the Americas into what they are today, this is what you should be reading. (10 out of 10)
Copyright © 2020 Thriftbooks.com Terms of Use | Privacy Policy | Do Not Sell My Personal Information | Accessibility Statement
ThriftBooks® and the ThriftBooks® logo are registered trademarks of Thrift Books Global, LLC