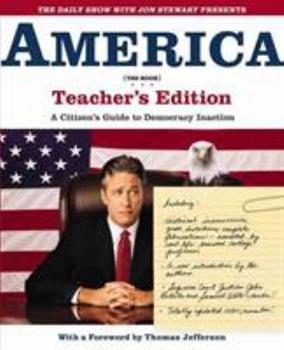 The Daily Show with Jon Stewart Presents America (the Book): A Citizen's Guide to Democracy Inaction

For everyone who was too cheap to buy the hardcover, the blockbuster, award-winning #1 New York Times bestseller is now in trade paperback-with a new introduction, fully updated, and with equally unsettling nude photos of the newest Supreme Court justices, and a text corrected by the most reputable college professor we could find/afford.Including: Historical inaccuracies, gross distortions, complete fabrications-corrected by real-life bearded college...

This wasn't exactly what I expected.

Published by Martie , 1 year ago
Its format is kind of crazy, it has a lot of notes in the margin and circles and arrows reminiscent of the song about Alice's Restaurant from the '70s. Frankly I have not read it yet. Sorry I love Jon Stewart but I'm disappointed in the format.

Published by Thriftbooks.com User , 17 years ago
This is Jon Stewart at his best. And let's be honest, folks, he rips both sides of the aisle in this mock-textbook of American history. Man, how I wish this was my history book back in high school. I would've studied then. So there's truth here, as well as good political humor. And a clever pull-out poster comes with it on the shadow democracy we have. Now, who can say that doesn't bear some truth!

Published by Thriftbooks.com User , 17 years ago
Jon Stewart and his Daily Show writers would have you believe this is humor masquerading as a "fake" civics textbook, but they undersell themselves. It's both funnier and smarter than that premise. It actually does spell out, chapter by chapter, the workings of the branches of government, the election process, and the role of journalism in creating and destroying all these (complete with in-class exercises and homework!) If you're a fan of the show, you will enjoy listening to Stewart riff on journalism's loss of integrity, to Samantha Bee's apologetic asides about "do you mind if I tell you how we do it in Canada?", Ed Helms' presentation of his qualifications to be Supreme Court justice, etc. The book is, however, not just a rehash of pieces from the TV show; the book form allows the writers to make their favorite comedic jabs against our system's foibles with more historical and literary support. (Who knew, for example, the role that the rivalry between newspaper magnates William Randolph Hearst and Joseph Pulitzer played in instigating the Spanish-American war?) Coming from any source but the Daily Show, this premise might have been tedious, but from this team it is consistently and hysterically funny. Free of the time and vocabulary limits of TV, they really cut loose. The seven-dirty-words-you-can't-say-on-television here are put to good use, amended by such popular modifiers as bat, horse, bull, and mother. So don't bring it home to the kiddos, or listen to the audiobook on your mini-van stereo, and avoid it altogether if you don't yourself throw a good hearty @*$% & % around every now and then. But remember the best, funniest lines about the preservation of democracy and repeat these lessons to your kids. It's funny and important stuff.

Is Educational Schtick an Oxymoron?

Published by Thriftbooks.com User , 17 years ago
As a poltical science student I can tell you without hesitation that you will LEARN something by reading this book! How much have you forgotten since 11th grade Civics class? More than you realize! While you're busy wetting yourself laughing at the graphics, you will subconciously be relearning what were once boring and useless factoids of history. Don't be surprised if suddenly you realize,"Hey! Wait a minute! There ARE nine Supreme Court justices! I always forget that guy with the teen-tiny (...)." You won't forget him now! WARNING: The (second) chapter on the media will have you contemplating spending the rest of your life with the Amish.

Oh, how we needed this!

Published by Thriftbooks.com User , 17 years ago
I hold in my hands a copy of the book "America--the Book" by Jon Stewart. From his zany foreword by "Thomas Jefferson" that literally made me spit out my coffee...to his open letter to Sean Penn requesting he keep his opinions to himself (oh, it rings so true), he had me laughing every time I turned the page. What an absolute delight in the wake of such a controversial election year. If you think he is biased, think again--he rips EVERYONE apart in a clever way. Make sure you check out the "voter registration form" on page 123. Actually, I could point you in the direction of many funny things, but there are too many to write about here. Buy it, buy it, buy it!
Trustpilot
Copyright © 2022 Thriftbooks.com Terms of Use | Privacy Policy | Do Not Sell or Share My Personal Information | Accessibility Statement
ThriftBooks® and the ThriftBooks® logo are registered trademarks of Thrift Books Global, LLC