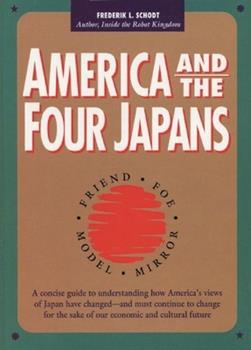 A readable overview of the ever-changing relationship between Japan and the United States.

Published by Thriftbooks.com User , 16 years ago
Originally published in 1994, America And The Four Japans is an analysis of the constantly changing relationship between Japan and the United States that remains timely and relevant as it was a decade ago. Incorporating history, cultural commentary, and opinions from both sides of the Pacific Ocean, it portrays Japan in four different roles as related to the U.S.: friend, rival, role model, and mirror. Chapters briefly survey modern Japanese history, address the trade deficit, warn against wishful thinking on both sides, and reveal the common threads that tie together two strikingly different cultures. A "must-read" introduction especially for international businesspeople and anyone whose career or personal interest lies in coming fully to grips with the dynamics of U.S.-Japanese economic, political and cultural interaction.

Published by Thriftbooks.com User , 17 years ago
This is a really excellent book & should be read by all with any sort of interest in Japan & those interested in Japan/U.S. relationships over the past 150 years or so. I lived in Japan for many years & speak and read the language, so can vouch for the authenticity of this book. It's also an excellent choice for instructors teaching classes on U.S./Japan relationships and the like. Highly recommended.

Published by Thriftbooks.com User , 22 years ago
Author's thesis is that Japan can best be understood by looking at it from the four perspectives enumerated in the book's subtitle.The author's thesis is original, well researched/supported (including many citations to Japanese publications) and rings true to me but doesn't read like an academic treatise . Also, the book's brevity is a plus.The only downside to the book is that it's now in need of an update -- most of the source material is from the late 80's and early 90's. It would be great if the author would update the book in light of the changes of the last 5-10 years, perhaps with a new intoduction and epilogue.The author's other books include "Manga! Manga!" (about the Japanese comic book/graphic novel genre) and "Inside the Robot Kingdom" whci is about Japanese robotics and robot culture.
Trustpilot
Copyright © 2022 Thriftbooks.com Terms of Use | Privacy Policy | Do Not Sell My Personal Information | Accessibility Statement
ThriftBooks® and the ThriftBooks® logo are registered trademarks of Thrift Books Global, LLC