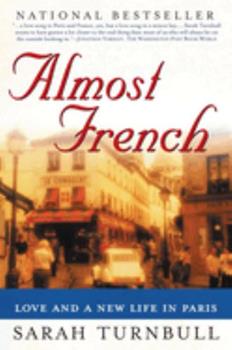 Almost French: Love and a New Life in Paris

The charming true story of a spirited young woman who finds adventure--and the love of her life--in Paris. "This isn't like me. I'm not the sort of girl who crosses continents to meet up with a man she hardly knows. Paris hadn't even been part of my travel plan..." A delightful, fresh twist on the travel memoir, Almost French takes us on a tour that is fraught with culture clashes but rife with deadpan humor. Sarah Turnbull's stint in Paris was only...

Published by Thriftbooks.com User , 14 years ago
This book is so true! I also live in Europe, and a lot of things in the book hold true for Europeans, not just the French. Sarah Turnbull tells both the highs and lows of living in France. I learned a few things from the book too, for example, how to select cheese, fish, and a few dishes. Also, I have always wondered why French women are always dressed in their "Sunday Best" clothing when I see them in a cafe' or in the supermarket. Now, I know. Wonderful book, very light hearted and informative.

Will whoever borrowed it last give it back? Please?

Published by Thriftbooks.com User , 17 years ago
Sarah Turnbull, an Australian journalist, takes a year off work to travel. While she is roaming around Europe she meets a Parisian named Frederic, who invites her to visit him in Paris. It sounds like a good idea at the time; she does, although by the time her plane lands at Charles de Gaulle she is beginning to wonder what possessed her to agree to stay with essentially a complete and total stranger.The visit goes well, though; so well, in fact, that she moves permanently not just to Paris, but into Frederic's apartment. The memoir that follows is a charming and amusing account of two cultures, embodied by two very different people -- the uptight, nattily dressed Frenchman and the casual, easy-going Aussie -- trying to coexist in a small space. He is appalled when she wears her sweat pants to pick up her morning baguette ("But it's not nice for the baker!"); she doesn't understand his sense of humor. This is a happy story that ends with a wedding, but not before the author has myriad battles with the language, countless misunderstandings with the the customs of the place, and some truly homesick spells yearning for Australia.I found this book laugh-out-loud funny (although I'll admit my reaction may have been a little extreme) because I have spent time in Paris and saw myself very clearly in Ms. Turnbull's language struggles, efforts to get a journalistic career going, and just general befuddlement. I've passed my copy on to some travelling companions who felt the same way I did. But even if you've never been to France, "Almost French" is well-worth reading for the entertainment value alone. The descriptions are apt. The voice is personable and interesting, so much so that by the time you've finished, you'll feel not just that you've visited Paris, but as if you've made a new friend while you were there.

Published by Thriftbooks.com User , 17 years ago
This is a rare gem. A wonderfully scripted book with the appropriate amount of wit and humuor thrown in, I was hoping for more when I finished reading it. Sarah Turnbull has given us an intimate amount of how she adapts to city life in France. It is a refreshing account of life in a foreign culture. Unlike books by Peter Mayle, Carole Drinkwater which tend to be stories of country living, this book give a glimpse into city life which is what many of us are familiar with. One can also learn more about the French way of thinking (told with extreme wit and sometimes, exasperation), living, communicating and dealing with bureacracy. I highly recommend this book to all who want to know the French a little more, to find out how a girl in her twenties mustered up the courage to stay with a Frenchman she barely knew during her gap year and finally settled down for good in this foreign land that is more than half the globe away from her native Australian home and how she adapted and became "almost french", all amid a hilarious read. I caught myself chuckling away in a cafe and the subway while reading this book. Of course, no one then understood why and could have labelled me crazy, but only if they knew what a book "Almost French" is.

Published by Thriftbooks.com User , 18 years ago
Turnbull takes every day life events and turns them into a witty and inspiring tale. A must read for anyone living overseas or just if you fantasize about it.
Copyright © 2020 Thriftbooks.com Terms of Use | Privacy Policy | Do Not Sell My Personal Information | Accessibility Statement
ThriftBooks® and the ThriftBooks® logo are registered trademarks of Thrift Books Global, LLC