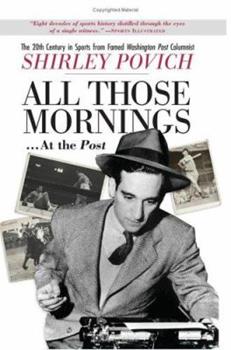 All those mornings . . . at the Post The 20th Century in Sports from Famed Washington Post Columnist Shirley Povich

Shirley Povich was the Dean of American sportswriters. As a columnist for The Washington Post for more than seventyfive years, he was an eyewitness to the most thrilling moments in American sports, including: the legendary 1927 Dempsy-Tunney "long count"; the celebrated 1938 race between Seabiscuit and War Admiral; the 1946 signing of Jackie Robinson by the Brooklyn Dodgers; Don Larsen's perfect game in the 1956 World Series; the Ali-Frazier fight...

A Great Look Back at 7 Decades of Sports

Published by Thriftbooks.com User , 16 years ago
I grew up in Washington reading Shirley Povich regularly. I read him for about 20 years in the Post. The interesting footnote to that is that he had "retired" before I ever started reading his columns! The scope of this work is breathtaking. How many journalists coverd the 1924 Senators World Series as well as their last game in 1971. Oh and for good measure he covered the start of the Tiger Woods era as well. Did I mention he caddied for President Harding? In an age when sports writers spend more time getting ready to be witty for ESPN shows, this book offers a wonderful insight into an era when sports writers worked a beat and REPORTED as well as offered commentary (and were actually writers). And Povich did both in a simple, straightforward style that was easy to digest with the morning coffee. His opinions were straighforward too and he tackled tough issues like racisim in sports, long before other sribes in the press box dared take a side on a controversial subject. The book is well edited with some nice historical context given to many of the works. Can't wait for Vol. 2, after all he wrote about 20,000 columns during his 74 year career at the post

The Soul of Sports Journalism

Published by Thriftbooks.com User , 16 years ago
Rarely does a book take me very long to read, especially when its composed of a series of short pieces such as newspaper columns. Journalism isn't supposed to be literature, and sports writing particularly is mainly to give the doggone scores. Then again, calling Mr. Povich a sportswriter is about as accurate as calling the Pope a good man. Mr. Povich was the genuine soul of the almighty Washington Post, perhaps the most principled writer ever to grace the pages of any newspaper's sports section. He belongs in the very rare and esteemed company of great journalists such as Cronkite, Mencken, Twain and pehaps a few others. Yeah, these pieces give you the story. What's more, you get the story behind the story. And it's done in language a 13-year-old can read and understand. Knowing perfectly well how special this collection is, I read it as slowly as possible. Why rush a good thing? I'm sure Mr. Povich had to fight the daily deadline pressures to produce the work. The least we can do is savor his command of language and keen insight into human character.

Published by Thriftbooks.com User , 16 years ago
For almost 75 years Shirley Povich was a fixture on the sports desk of the Washington Post. He didn't exactly invent sports reporting, but he certainly help define it in a unique way. His style of reporting, his style of writing created a respect that went beyond sports. He used the sports world as a window on the broader world of America. Sports reflected the dramatic changes in American society over the course of the twentieth century from the depression, to war, to race, to everything else. The problem with newspaper columns is that they get recycled with the rest of the paper. Only once in a while are a lifetime of columns lovingly collected by people who care (his children and a sports editor) and are published as a book. If you are familar with the original columns, here is a visit with old friends. If you have not read the originals, here is the way that sports (and maybe everything else) should be reported. This book is an absolute delight.

A Washington Institution for 75 years

Published by Thriftbooks.com User , 16 years ago
An interesting conversation took place the other day. I mentioned to my grandfather, now in his early 80s, that I had just bought the new book entitled "All those Mornings...at the Post." And he responded with, "I grew up reading Shirley Povich." My response: "So did I, and I am 25." And so did my father. That's the amazing thing about Povich - he linked generations. He wrote about stars from Walter Johnson to Michael Jordan and everyone in between. As a freelance sports writer, and former sports editor of my college newspaper, the Towerlight in Towson, Md., Povich was my biggest inspiration growing up and I would be willing to bet that most other sportswriters or aspiring sportswriters feel the same way. I tried to put in perspective to my wife how influential he was. I said he is the Humphrey Bogart of sports writing. He is the epitome of what newspapermen should be and he was just as good in 1994 as he was in 1924. The amazing thing is he never retired and wrote his final column the day before he died in 1998. This book brings his most important columns to life and for people of my generation we get to live events such as the Senators' only World Series title in 1924 for the first time. This book is a treasure and is highly recommended to anyone who has ever read a sports column. Chances are the person who wrote the column did so because Shirley L. Povich inspired him.

Published by Thriftbooks.com User , 16 years ago
Long live the legacy of Shirley Povich. This book brings to the current generation the work of the best, Shorley Povich. It is mandatory reading for every sports fan!!!
Copyright © 2022 Thriftbooks.com Terms of Use | Privacy Policy | Do Not Sell My Personal Information | Accessibility Statement
ThriftBooks® and the ThriftBooks® logo are registered trademarks of Thrift Books Global, LLC