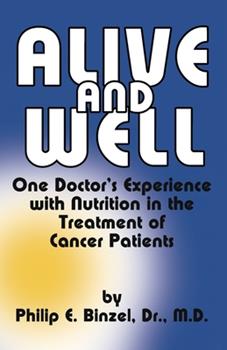 Alive and Well: One Doctor's Experience With Nutrition in the Treatment of Cancer Patients

Start here for an insight into the Cancer industry

Published by Thriftbooks.com User , 16 years ago
Written from a Doctors' perspective, the journey he took to educate himself in order to help his cancer patients and the hurdles and objections from the medical establishment he endured to continue his successful treatments.

Published by Thriftbooks.com User , 17 years ago
What if there was an medical doctor with an outstanding nutritional program for cancer? Would the FDA try to squelch the doctor's findings and try to prevent him from practicing? Cancer treatment is a huge industry for big pharmaceutical companies and cancer treatment centers. Would they go out of business if there was a simple, nutritional protocol with excellent results against cancer? What if simple nutritional methods to nourish the body's own immune system and prevent cancer's spread are much better than the expensive, toxic radiation and high-priced proprietary toxic chemo drugs dispensed at today's oncology centers? What if the cancer drug your doctor dispenses depends on which drug company's pharmaceutical rep takes him out to lunch? This book tells you that "what if," in detail, and in real life. It details various government agencies' attempts to harass Dr. Binzel through "enforcers" and the legal system. Binzel presents an astonishing record of 85% 5-year survival among his patients with primary cancer and 60% survival for those with metastatic cancer. These results can't be verified, because of the privacy of his patients' medical records. But some of the survivors agreed to let their names and medical histories be released, and they are shown in this book. The book also shows you the 3-part treatment system Binzel used - 1. Vitamins and enzymes, 2. vegetarian diet, and 3. nitrocilides, or vitamin B17, which is found in everyday foods like millet, lentils, alfalfa sprouts, garbanzo beans and apple seeds. This is an enjoyable read if you suffer from cancer, or know someone who does. It is not the promise of a cure. The basic idea is to support and enhance your body's own natural defenses against cancer. Highly recommended, whether you support today's cytotoxic chemotherapy methods or not. The FDA would never try to lie to you, or manipulate the results of drug studies funded by big drug companies, would they? Drug companies contribute to political campaigns, but that doesn't influence laws about our health, does it?

Take it From a Qualified Expert!

Published by Thriftbooks.com User , 19 years ago
Many of the pro-Laetrile works that I have read were written by private citizens and laymen, and as a result one would say that these were not qualified to make claims. And such accusations have been made.Now we have hard evidence in favor of Laetrile from a MEDICAL DOCTOR! Finally! A qualified source since Dr. Ernst Krebs' initial discovery has been found. A must read to accompany World Without Cancer by G. Edward Griffin.

Published by Thriftbooks.com User , 21 years ago
Dr. Binzel backs up the information found in "World Without Cancer" with actual case histories and results. For those that think that Laetrile is the only component in cancer treatment, this book shows why, and how, cancer needs to be treated - a combination of vitamins, diet and laetrile.Actual programs used to achieve 82% success rates in treating primary cancer, and 65% in treating metastates cancer, show you the vast difference between "orthodox" cancer treatment, with success rates of less than 10%, to this "un-approved" treatment.Most definitely something you want to share with your friends.

He may be onto something...

Published by Thriftbooks.com User , 22 years ago
After frequenting alternative medicine newsgroups, which are full of "cancer cure" vendors, it's nice to see a book that is written with a large degree of humility. Dr. Binzel has, for many years, used the controversial chemical "laetrile" to treat cancer. The first 96 pages are stories of his legal struggles and court appearances (including a few major newsworthy cases in which he was called to witness to the efficacy of laetrile). In some ways his run-ins with the state read like a good novel. While a very conservative company publishes the book, I (a moderate) did not find any grand conspiracy theories.The last 40 pages are devoted to his controversial approach (diet, laetrile, enzymes, Vitamin A, etc) and his results using his therapy. He even includes photos of some of his success cases. The results are clinical data and are thus not considered as scientifically valid as a randomized test. However, his statistics suggest that he is onto something. For instance, his five year survival rates for metastasized cancers (cancers that have spread throughout the body) are impressive at 60%. His results for primary tumors are higher at an 80% 5 year survival rate. However it is important to remember that his data have not been published scientifically and thus have not been peer-reviewed. However his statistics do show that the laetrile-metabolic approach should not be characterized as "completely worthless." I would say to read this with an open, yet critical mind (as all non-fiction should be read). Anybody who has read the popular 70s book, "Laetrile Case Histories," will see an immediate similarity between that book and, "Alive and Well." In some ways this is the "Laetrile Case Histories" for the new millenium.
Trustpilot
Copyright © 2022 Thriftbooks.com Terms of Use | Privacy Policy | Do Not Sell or Share My Personal Information | Accessibility Statement
ThriftBooks® and the ThriftBooks® logo are registered trademarks of Thrift Books Global, LLC