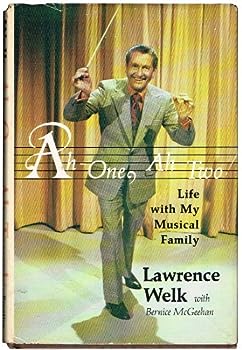 by Lawrence Welk and Bernice McGeehan

Autographed by author Lawrence Welk with dust jacket. This description may be from another edition of this product.

Published by Thriftbooks.com User , 15 years ago
Item as described and received in a timely manner... an excellent buying experience!

Published by Thriftbooks.com User , 20 years ago
I'm not even a big Lawrence Welk fan (though my dad is. When he went to the U. of Chicago, he would pay 25 cents to dance to LW live each Saturday night).This book is an Autobiography of Lawrence Welk, so it tells much about his private life from birth on up. He got into having his own band during the 1920's when radio was new and he had to really struggle to get anybody to hear him at all. It was worse than a Gypsy's life on the road. He tells many very interesting stories of playing engagements, how they were promoted, what different audiences were like, etc. One story that made me laugh out loud was how in certain areas of the country it was not uncommon for people to bring a gun to a dance, and if someone's girlfriend got looked at by an undesireable competitor, shots would be fired. LW and his band got to where they didn't even bother getting off the stage. They would just hide behind the piano until the shooting was over, then they would get out and keep playing, while members of the crowd would haul off the injured parties. I don't think anybody died at any of his concerts, but it seems clear that the spirit of the American Frontier was still alive into the 30's, at least.I gained a real appreciation for Lawrence Welk after reading this book.--George Stancliffe
Trustpilot
Copyright © 2022 Thriftbooks.com Terms of Use | Privacy Policy | Do Not Sell My Personal Information | Cookie Preferences | Accessibility Statement
ThriftBooks® and the ThriftBooks® logo are registered trademarks of Thrift Books Global, LLC