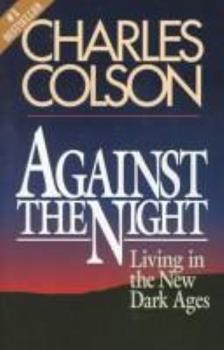 Against the Night: Living in the New Dark Ages

Since this book was written in 1989, the shadows over the world have grown deeper and longer. Many of us may have become blindly accustomed to the persistently deteriorating state of affairs. Charles... This description may be from another edition of this product.

Most marked up book (next to the Bible)

Published by Thriftbooks.com User , 13 years ago
I have read this book twice, once when it came out in 1989, and once about 1998. I would mention that between the two readings, I lost my 1989 edition. However it was so marked up, it was hard to read the material for all the markings interposed. The 1998 copy I read mostly on an airplane (and marked it up again!). In 1989, I thought it had the most substance of any 'problem and solution' book I had ever read. Colson was trying to be a 'watchman on the wall', and was warning us on what lay ahead if our nation, and the nation's people (us), did not change our ways. The first half was diagnostic and prophetic (the problem), the second half was restorative and remedial (the solution). By 1998, America, its people and its Christians were well down the road of what Colson was fearing. And now in 2009, we have arrived and have found ourselves in the middle of a giant mess. I'm going to reread it again, and see if the solutions might possibly still be valid. Highly recommended!

Published by Thriftbooks.com User , 15 years ago
While the barbarians who pillaged the Roman empire could be identified by their physical appearance, today's barbarians have no such distinguishing marks. The warfare is mental and spiritual. It is an insidiuous mindset that is at work destroying individuals, families, communities, churches, universities, and nations. In essence that mindset could be summarized as "selfish materialism," i.e., the assumption that one lives for oneself and this life is all there is to existence. The tentacles of this monster extend to every area of modern life, including the church. Colson gives convincing examples in presenting his case. Christians of previous generations knew they were living for something greater than "self." That reality is not so apparent anymore. One has to cultivate it. In the concluding section, he argues that Christians must fight the good fight regardless of the outcome. Being in the world, but not of the world, Christians of earlier generations preserved culture, not because that was their primary goal, but as a side-effect of seeking to obey God. He concludes the same is expected of this generation.

Published by Thriftbooks.com User , 26 years ago
I've always enjoyed Chuck Colson's writings. The style is easy to read and clear, like you would be having a conversation with the author. When he was with President Nixon's Cabinet, he was going the way of all politians - POWER. But some humbling time in jail gave him time to think about the important things in life. Family, God, and his spiritual condition. He turned his life around and changed the way he was headed by receiving Jesus Christ as Savior, Lord, and Life. Making a new committment to serve Jesus and others, especially fellow prisoners. His work with justice, jails, and Jesus are very well acknowledged now. (search: colson, prison fellowship) In his book Against the Night, you are shown what the darkness looks like and how to compare it to the Light. Quickly you are given practical examples and stories of how insignificant people, in the world's eyes, made a change in their life and the lives of others by caring about what was happening around them, to others, and shown that a little caring followed by a little action can make big changes for the betterment of all of us. I would recommend this book highly to anyone and to everyone who wants to come Against the Night.
Trustpilot
Copyright © 2022 Thriftbooks.com Terms of Use | Privacy Policy | Do Not Sell My Personal Information | Cookie Preferences | Accessibility Statement
ThriftBooks® and the ThriftBooks® logo are registered trademarks of Thrift Books Global, LLC