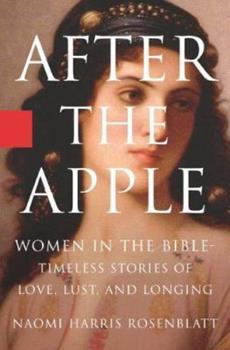 After the Apple: Women in the Bible: Women In the Bible - Timeless Stories of Love, Lust, and Longing

A retelling and reinterpretation of the timeless stories about women and love contained in the Hebrew Bible. Strong, unpredictable, difficult and endlessly resourceful, the women in the Hebrew Bible are some of its most memorable characters. From Eve to the Queen of Sheba, from Delilah to Sarah, women play a key role in stories that have survived for over 2,000 years. Rosenblatt uses 13 Bible stories to illustrate different facets of the male-female...

Published by Thriftbooks.com User , 15 years ago
I had been looking for a book presenting Bible stories in an accessible way. While the focus is narrowed to the stories of women, I got far more than access to Bible stories with "After the Apple". I liked that Rosenblatt explained how concepts originated. For instance, the word commonly translated as "rib" (Adam's) technically means side. I also liked that she put stories from the different Bible chapters together. For instance she tells how how David grew from the lyre playing shephard boy who slew Goliath to being a King. In Sunday School we drew pictures of Jacob's ladder. We learned about the beauty of David's "royal city" and sang about it. We did NOT learn about Jacob's concubines nor of David ignoring his daughter's rape by his son. With no paternal protection, she could have been stoned were it not for another brother who had a moral sense and or cared about her. In the end, David moarns for this son... not the fate of the daughter. The Bible's world is very disturbing. Death by stoning for rumored infractions is a threat for all, especially women. The masses most likely lived on subsistence diets. It seems to be a Darwinian world and the male id, among the elite, appears to be unrestrained. Other than the Queen of Sheba (somewhat), the women cited in this book are immortalized in the Bible for their sexual interactions (whether in marital or union or not) with men. It makes you weep for all the other women who did not/could not approach the palace, a sheltering tent or even a smile. What of the homely/ugly, the unsponsored, the sick? The presumably better lives of these few women cited causes one to wonder about the foundations of this society. Rosenblatt gives these stories a very sympathetic treatment. They add to the understanding of history and ourselves. I give this book 5 stars because so much complex material is digested for lay people like me to understand it. I cannot say I enjoyed it because there was too much repression and pain in the lives of these (few) heroines. Empathy among the characters, particularly the men to the women, is rare. The inspiration for me is not in the stories but in how far societies of the world have progressed since this time.

Published by Thriftbooks.com User , 15 years ago
Ms. Rosenblatt's excellent book has enriched my study of the Old Testament as well as my study of psychotherapy. As a 56 y/o grandma, I had become somewhat "ho hum" over the Old Testament stories; her obvious affection for these characters from the Torah and her insight of the women as people with great initiative and courage, rather than the passive creatures they have been portrayed in the past, has ignited my interest once more and made me see them with new eyes. I also have Ms. Rosenblatt's tapes of "In God's Image" which I listen to whenever I have to go somewhere in the car. I recommend them highly, as well. I intend to recommend her books and tapes to the other students in my class at Corban College. Through her eyes, these two-dimensional characters from Bible text, our spiritual forebearers, have come alive once more in my imagination. Here's hoping she will write many more books.

Buy it, Read it, discuss it!

Published by Thriftbooks.com User , 16 years ago
As a veteran bookseller, I highly recommend After The Apple for bookclubs, reading groups, church seminars and any community gatherings. Having attended her numerous book signings, it's amazing how she generates such enthusiasm and interaction within the audience..you come away with biblical insights that ring so true in today's world. That's because in her professional life beyond being a nationally known author of 2 books (Wrestling with Angels, and a frequent panelist on Bill Moyer's televised Bible Series), she's also a a therapist. We come to see ourselves in historical and social perspective, past, present and future! But it, read it, discuss it!

After the Apple provides lessons for today

Published by Thriftbooks.com User , 16 years ago
Naomi Harris Rosenblatt is a Jewish psychotherapist who has gained much of her understanding about people from the Bible. As she states, "by portraying life as it is, with all its contradictions and complexities, the Bible has guided me along the path of compassion, empathy, and understanding of others." In "After the Apple: Women in the Bible," she uses the Jewish technique of midrash, reinterpreting Biblical narratives in light of today's circumstances, to delve into the lives of several notable women of the Hebrew Scriptures. In Rosenblatt's capable hands, these women are three-dimensional. They struggle with decisions and with odds stacked against them. Rosenblatt analyzes their motivation and their influences. None are purely good or purely evil (although Jezebel does come close!) Most of them are simply trying to survive and insure that the Jewish faith will continue to the next generation. Several, including Sarah, Rebecca, and Rachel, conceive children late in life, having faced the difficulty of infertility in a world where much of a woman's value was the children she gave her husband. Some such as Leah, Jacob's first wife, and Michal, David's first wife, are stuck in unhappy marriages. While Leah creates her own identity as mother to her children, Michal becomes a bitter woman who seals her own fate when she humiliates the king in public. Later on, another wife of David's, Bathsheba, will exert her influence in having her son Solomon named to the throne to succeed his father. Ruth and Esther are the two women for whom books of the Bible have been named. Both use seduction as a means of getting what they need. Ruth seduces Boaz so that he will take her as his wife and provide support for her and her mother-in-law Naomi. Their great-grandchild is King David. Esther is a member of the Persian king's harem. After one night with her, he decides to make her queen. Ultimately, she will use her influence to prevent the mass killing of all Jews living in Persia. Rosenblatt acknowledges that the biblical scribes (most, if not all, of whom were men) were very sympathetic to women. "The risks they took, their heroism, and their resourcefulness" was recorded in detail. Exploring the lives of the women in "After the Apple" can help us understand our own lives and difficult circumstances more clearly. Patrice Fagnant-MacArthur is editor of "The Spiritual Woman Newsletter" and author of "Letters to Mary from a Young Mother" (iUniverse, 2004). She has a Master of Arts Degree in Applied Theology from Elms College.

Published by Thriftbooks.com User , 17 years ago
Truly inspirational, After The Apple reminded me of all the amazing women in the Bible I'd forgotten or never knew existed. Rosenblatt retells these ancient tales like gripping short stories. She infuses the text with just the right amount of analysis gleaned from her background as a psychotherapist to make the connection between the problems these women faced and those we face today as contemporary women. After the Apple will appeal to any age group. Recommended as a great Mother's Day gift too.
Trustpilot
Copyright © 2022 Thriftbooks.com Terms of Use | Privacy Policy | Do Not Sell My Personal Information | Accessibility Statement
ThriftBooks® and the ThriftBooks® logo are registered trademarks of Thrift Books Global, LLC